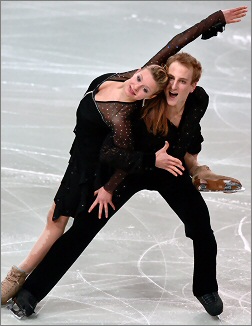 Ice dancers Nora von Bergen (16) and David DeFazio (23) of Switzerland perform to Nothing Else Matters by Metallica at the 2007 European Figure Skating Championships.

David DeFazio, an American from Red Bank, New Jersey, hopes to be successful in ice dancing competing for Switzerland with Nora von Bergen.

When he and von Bergen competed and won at Swiss Nationals this season, it was the third country for which he had competed after the United States and Canada.

DeFazio first competed in freestyle in the United States, reaching 12th at Nationals in intermediate men in 1999 and continued competing through the junior level.

DeFazio is now 16-year-old von Bergen’s second partner. She previously competed with Boris Raber, taking bronze, silver and then two gold medals in junior ice dancing at Swiss Nationals between 2003 and 2006. The couple was 20th at the World Junior Figure Skating Championships in 2005, but fell to 25th in 2006.

This season, von Bergen and DeFazio made their debut at the European Championships, finishing 22th overall, but 19th in the free dance.

“Our goal was to win Swiss Nationals and make it to Europeans and make it to the top 24 to make the free dance,” DeFazio said. “We wanted to stay as close as possible to the more experienced teams.” They accomplished those goals, but needed to finish 15th for the Swiss Federation to send them to Worlds in Japan.

DeFazio followed his older brother into sports. When he was five, he started swimming after his brother joined a club team and competed until he was 12. His specialty was the butterfly. When his brother started playing hockey in high school, DeFazio took to the ice. He was eleven.

“While my brother had hockey practice, I skated on public sessions,” he remembered. “But one day I fell and cut my chin, so my parents decided to sign me up for lessons. I got all my jumps up to the triple toe and the triple loop, but I hurt my back jumping and had to stop.”

DeFazio started dance in 2002. “I had moved to Mariposa for free skating, but after I hurt my back, my coaches suggested that I try stroking with the dancers,” he stated. “I liked it and started ice dancing. I competed with Laura (Csumrik) for two years, then sat out a year before skating with Ariane Morin in 2005-06 in Montreal. But she was in engineering school and had to spend a lot of time studying. We were working with Bruno Yvars and Martine Patenaude and the coaches saw we were going in different directions so I went back to Mariposa last summer.”

Von Bergen began skating when she was three. “I had some kind of spatial relationship problems when I was young,” she recalled. “The right half and left half of my brain didn’t agree. The doctors recommended to my parents that I go into some expensive therapy, but one of their friends who was a judge told them to try skating to see if that would help. My mother came to the rink to help me skate and it worked for me so I started lessons when I was five. For the first two years, they told me I could not jump, but later I learned up to a triple toe and a triple salchow and was sixth in juniors one year at Swiss Nationals. I competed in singles until I was 13.”

“I always took single dance lessons to help me to have soft knees,” von Bergen continued. “Tomas Morbacher partnered me for the tests, but I didn’t like ice dancing. I wouldn’t watch television when dance was on. But I hurt my knee and couldn’t jump. I began to watch and like dance so I started dancing with Boris. We competed until last year. Then last year after we split up, I went on the Internet to look for partners. I wrote to several boys and David was the most interested.”

“I went to Oberstdorf to do a tryout in June [with Nora],” DeFazio added. “Then I took a DVD of the tryout back to Barrie to show my coaches and Nora came in July to start training.”

The team trains part-time in Oberstdorf, Germany with Martin Skotnicky and are currently looking for a full-time training site. Pasquale Camerlengo and Kelly Johnson choreographed the couple’s 2006-07 programs. They used Assassin’s Tango by John Powell from the Mr. And Mrs. Smith soundtrack and Tango de los Exialiados by Walter Taieb performed by Vanessa Mae for their original dance, and Nothing Else Matters by Metallica for the free dance.

“Bruno suggested the free dance music when I was still skating in Montreal,” recalled DeFazio. “We both liked it because it’s really intense and straightforward to interpret. We wanted something theatrical and dramatic. I like dramatic pieces.”

“I like to try more blues and rock and roll and funky music,” added von Bergen.

Off ice, DeFazio listens to any kind of rock, but mainly punk music, while von Bergen said, “I’m open to all kinds of music but I like swing and blues.”

DeFazio played the violin and trumpet in his school band, while von Bergen plays the piano and flute.

DeFazio has taken two years of university courses at the State University of New York. He plans to major in cultural studies with an eye to doing something in politics or journalism. His partner still has to finish two years of high school in Switzerland but has no university plans. “My first priority is skating,” she said. “I can study when I’m done skating.”

Off ice, DeFazio said he likes to read “more literature and non-fiction than trash” and go to rock concerts. He also plays tennis. Von Bergen likes meeting friends, having fun, dancing, reading and going to movies. Their tastes in movies differs as he enjoys horror films and she hates them. “I go to movies to enjoy them, not to be scared,” she said.

Von Bergen also keeps good luck presents that friends have given her for competitions.