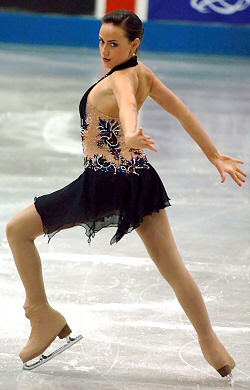 Juliana Cannarozzo performs at the 2007 US Figure Skating Championships.

At 17, U. S. junior international ladies competitor Juliana Cannarozzo has already embarked on her chosen career path. The talented brunette, who aspires to be an actress, played one of the main characters, Zoe Bloch, in a Walt Disney Productions feature film, Ice Princess which starred Kim Cattrall of Sex in the City fame and Joan Cusack. The film opened in theatres in 2005.

“I’ve been acting since a school play in the third grade,” Cannarozzo said. “I’ve always liked movies and I want to be an actress. Jamie Isley was doing the choreography for Ice Princess and she told me she thought I should try out for it. I thought she was joking but one of my friends told me I should go.”

“I had fun at the audition,” recalled Cannarozzo, “but didn’t think anything about it, and then a month later, the producers called and asked me to come to Hollywood to read for them. I read for the parts with five or six other girls. We did some things ad lib and we all acted out a scene. After I came back home they called and said I got the part of ‘Zoe Bloch’.”

Cannarozzo worked on the movie set in Toronto, Ontario, Canada for three months. Then after Nationals last season, she got another break.

“I got another part in a McDonald’s commercial for an espresso milkshake in Japan,” she stated. “The theme was normal people drinking the milkshake and then doing something fantastic. In my commercial, they had a girl skating outside, then doing a huge jump and coming out all twisted and then straightening out.”

Cannarozzo is looking for an agent in New York or Los Angeles, hoping to get more acting jobs in the summer.

The talented brunette improved substantially in her international placements in the Junior Grand Prix Series between the 2005-06 and 2006-07 seasons. In 2005-06, she won bronze medals in Sofia, Bulgaria and Okaya City, Japan, while last season she won in both Budapest, Hungary and Oslo, Norway, earning a trip to the ISU Junior Grand Prix Final. Hampered by tendonitis in one ankle, she finished seventh at the Final.

Cannarozzo began skating when she was six.

“My favorite jump is the loop,” Cannarozzo said. “I can do everything but the triple Axel.” She included a triple lutz-double toe combination in her short program and triple flip-double toe and triple loop-double toe in her long as well as four other triples.

“I’m working on triple salchow-triple toe and triple loop-triple toe,” she added, “but I had to cut down on training because I got tendonitis in my ankle.”

Mark Mitchell and Peter Johansson have coached Cannarozzo, who trains at the Skating Club of Boston, for the past eight years. She works for about three hours a day, five days a week on ice and does another hour or two of off-ice training each day, including Pilates as well as ballet and other dance classes in the summer. She started ballet when she was younger and studied at a ballet academy for a few years. She also took part in gymnastics classes when she was eight or nine.

Mitchell and Jamie Isley choreographed both of her new programs for the 2006-07 season.

“I like to play a new character every year,” Cannarozzo said. “Mark brings in music and I try to picture myself skating to it. I like music that is beautiful and powerful.” This season, her short program music was Egyptian Disco by DJ Disse and Peter Langerman. For the long, she used three tangos by Astor Piazzolla: Revirando, Oblivion, and Tangazzo. “Mark heard it in the street in Argentina and I loved it,” she said. Her gala program is to The Prayer by Charlotte Church and Josh Groban, and is dedicated to her father who has been suffering from a brain tumor.

Cannarozzo listens to all kinds of music. Some of her favorites include Corinne Bailey Rae, Dashboard Confessional, Natasha Bedingfield, Imogen Heap and the Pussycat Dolls. “I listen to anything from country to rap,” she said, “anything that gets me moving and motivated. I love watching American Idol and I sing by myself all the time.” Off ice, she enjoys watching movies, going out with friends, hanging out with her sister and playing sports with her brother, including tennis. She also likes to cook.

Cannarozzo has also been involved in several charitable activities for many years including the American Cancer Society and the Brain Tumor Foundation. She has skated in a show for the Salvation Army for the past seven years as well as the Ice Chips show for the Make A Wish Foundation and the Harvard University An Evening with Champions show for the Jimmy Fund.

Cannarozzo is a senior in high school and is home schooled.

“I’ve always liked art and science and I love doing the labs,” Cannarozzo said. “I like doing sculpture and pottery that you put in an oven. I want to go to college but not right away. I’ll probably try acting or fashion design.” In addition to acting, Cannarozzo would like to be a figure skating coach and choreographer after she finishes competing. “I’ve taught Learn to Skate, but I’m not coaching now,” she said.

The native of Reading, MA, competes in senior ladies in the U. S., but can still continue in juniors internationally. Cannarozzo was recently assigned to the Junior Grand Prix in Tallinn, Estonia (Sept. 20-23, 2007).

“My goal for this year was to get to the Junior Grand Prix Final and to skate two good programs at Nationals. Eventually I hope to go to the Olympics. That would be amazing.”