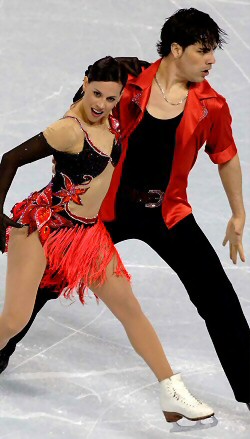 Ice dancers Laura Muñana (25) and Luke Muñana (28) of Mexico perform their Original Dance to Tango Bárbaro and Tango Para Percusión from the Tango soundtrack and Tanguera by Sexteto Mayo.

Although most people think that ice dancers Laura and Luke Muñana were named after the famous couple on the popular television soap opera General Hospital, the siblings are quick to point out that it isn’t true.

“Our mother never even saw the TV show,” Laura said. “When she heard about it, she even thought about changing our names.” Now the Muñanas are trying to make their own names known in the skating world as they compete internationally for Mexico.

The ice dancers, who are the first ice dancers to represent Mexico internationally, finished ninth at Four Continents in 2005 and 2006, but fell to 11th in 2007 last season after Laura was diagnosed with a nervous system disorder and had to remain off the ice for several months. The dancers have finished 25th, 26th and 29th at the World Figure Skating Championships in the last three seasons.

Initially, they competed in pairs starting in 1995, then added ice dance in 1996. They finished eighth in intermediate pairs at U. S. Junior Nationals in 1996, but only reached Sectionals in novice dance that season. In 1997, they competed in novice pairs at Nationals, finishing 13th. By the 1997-98 season, they had moved up to junior pairs and novice dance, where they placed seventh at Nationals.

But then Luke suffered a back injury during the 1998-99 season, knocking the couple out of Nationals.

“I wasn’t supposed to do anything athletic and was even questioning whether I wanted to continue to skate,” he said. Laura did want to continue so she teamed up with Paul Goldner in junior dance, placing tenth at the 2000 Nationals.

“We split up right after Nationals,” Laura said. “Then Luke and I started back together in March.”

“After that, we knew we had to change our coaches and our whole training environment,” Laura said. “We had been thinking about skating for Mexico for three years, but we didn’t have the right connections to get it done. Then we just decided to go for it. Our Dad’s a Mexican citizen and we got our dual citizenship papers just two weeks before Mexican Nationals.”

“We began skating with Marina Klimova and Sergei Ponomarenko in June 2004,” Luke continued. “We were learning more in two days than we were in a week before.”

But in November 2006, when their coaches had too many other commitments, the dancers worked with former British ice dance champions Pamela O’Connor and Jonathon O’Dougherty for a few weeks, then moved to Lyon, France in January 2007 to train with Muriel Zazoui. The dancers now work on ice for four and a half hours a day, five or six days a week. They also do a few hours of off ice training and ballet each week.

The three coaches choreograph the dancer’s programs. Last season, they used Tango Bárbaro and Tango Para Percusión from the Tango soundtrack and Tanguera by Sexteto Mayor for their original dance.

“We were looking forward to having the Latin original dance,” Laura said. “We like music with Latin influences – sharp and aggressive music.” Their free dance was to Bei Mir Bist du Schön and Sing, Sing, Sing from the Swing Kids soundtrack. Off ice, Laura listens to a lot of Latin music, while Luke favors rock and techno.

Laura is an accomplished musician. She has an associate university degree in music and plays both the piano and the flute. But her primary focus is as a vocalist. She sings with several groups and has cut several demo records, but said, “I haven’t found my sound niche yet.” She plays the piano at church and teaches piano to help pay for skating, but said, “I don’t want to teach band, but I like teaching one-on-one. I’d rather be performing. I love recording.”

Luke attended college for a year and a half, majoring in graphic design.

“I’ll probably do something else for a career,” he said. “Right now I’m teaching skating for ten to 15 hours a week, so I’ll probably end up as a skating coach. We really hope to tour first.”

“I like surfing, snow boarding, anything that gives me a rush,” he said. “I used to do import car racing before my car was stolen.”

Other than listening to and recording music, Laura likes salsa dancing and water sports.

“I like wake boarding and snow boarding, but I’m a little bit more cautious than Luke,” she said.

Neither skater collects anything, although they always keep one or two special gifts from each event as a keepsake. Both skaters like to go to the beach for holidays. Luke’s favorite trip was to Hawaii because of the surfing and skateboarding there. Laura preferred the city of Vienna and its historic buildings.

“We definitely want to see as many places as possible,” she said. “Too many to name.”

The dancers plan to compete for at least the next five years.

“We need to make our compulsories stronger,” Laura noted. “And we need to improve out skating overall.”

“We definitely plan to step it up a notch next season to prove we deserve to be higher in the rankings,” added Luke.

Laura will be getting married May 7th, 2007 in Puerto Vallarta, to her boyfriend of six years, a professional drummer and wake boarder.