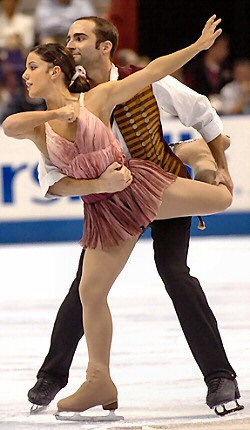 On the usual Thursday afternoon, Derek Trent, 27, can be found working on his finance homework in a quiet corner of a coffee shop. It is a much different scene than the cold mornings at the ice rink, where he chases a decade old Olympic dream with his partner Tiffany Vise, 21.

“Thursdays we are done at noon so I take the rest of the day to do homework,” said Trent, who takes correspondence courses through the University of Colorado at Colorado Springs.

“I am three-fourths of the way done with my graduate school and my Master’s of Business Administration (MBA) program,” he continued. “I am taking two classes in a condensed eight-week program this summer, which begins in a week. My plans are to graduate one year from now with two areas of emphasis – International Business and Management.”

But Trent is not the only student of the pairs team which trains five days a week with Canadian pairs national champion Doug Ladret and wife Lara at the Alltel Ice Den in Scottsdale, Ariz.

“This spring I took three classes,” offered Vise, who plans to transfer to Arizona State University to pursue a career in sports medicine. “In the fall, I’m going to take two classes. I’m not taking any summer classes. I need to give my brain a break and enjoy the summer as much as possible in the 110 degree weather.”

It has not been easy for the pair to balance academics with elite figure skating.

“It is definitely a challenge but I wanted to get [graduate school] going,” said Trent. “It has always provided me with great balance to attend school and skate at the same time – even though it is difficult to manage at times.”

Trent, who has an undergraduate degree in business and Spanish 2002, often works on his assignments while in the airport waiting for flights to and from competitions.

“I really like being busy,” stated Vise. “It really isn’t that difficult in maintaining a balanced life. I just have to be very efficient and be good at time management. I’m enjoying have other stuff besides skating to do. It balances things out and I’m not as stressed out about skating. When I am gone for competitions, my professors have been great in helping me get through my school work.”

It is a good thing Vise and Trent thrive on demanding lifestyles as both also work to support their skating careers.

“It would be nice to allow skating to be more of the work,” admitted Trent. “We would love to be able to tone down the amount we both work in order to be able to concentrate fully on our skating careers, but that is not a luxury we have at this time.”

“I coach a talented group of students at the Ice Den,” said Trent, who is also a licensed real estate agent who has worked part time in the Phoenix area to support his skating.

“I work at a restaurant as a server and I also coach skating,” Vise said. “My work is very nice about letting me off whenever I have a competition. I have their full support. We have many regulars at our restaurant and whenever they come in, they want an update on my skating.”

And Vise has certainly had plenty to talk about.

“We are both very pleased with the majority of last season,” Trent said. The team competed twice on the Grand Prix circuit last season.

“Watching my sister (Brittany) compete in two Grand Prix events the previous year, I really wanted to get assigned to at least one Grand Prix,” said Vise. “I was shocked when we ended up getting two!” Brittany Vise finished fifth at 2005 NHK Trophy and seventh at the 2005 Cup of Russia competition with her former partner Nicholas Kole.

“It was an awesome experience to be competing against the best in the world on the Grand Prix circuit,” Trent said. The pair placed sixth at 2006 Skate America in Hartford, Conn., before improving to fifth at Skate Canada in Victoria, British Columbia.

“It was an honor competing at Skate America,” Vise added. “I do have to say, both Derek and I were overwhelmed with the cameras. It was funny – the first five minutes of our first practice, I looked at Derek and said, ‘Wow, we’re actually out here!’ It was a great feeling.”

The two spent the day between Skate America and Skate Canada in their Scottsdale, Ariz., ice rink improving the levels of their program elements.

“We kind of reformatted some elements to get the higher levels,” disclosed Trent. The pair focused on their death spiral and lifts – two areas the pair felt were under marked at Skate America.

It paid off. The improved elements resulted in a personal best short program that earned the pair 49.50 points, nearly three points higher than their performance a week earlier. Their routine, which earned the pair 28.30 points for technical elements, included a double twist and a throw triple loop.

“One of the happiest times for us as a team is when we broke a hundred at Skate Canada,” Trent said of their free skate. “It was an exciting feat for us to earn that type of score.”

Skating to selections from the Les Miserables soundtrack for the free skate, Vise and Trent received a personal best 100.96 points. The program earned them nearly nine points more points than their previous personal best, set at 2005 Karl Schäfer Memorial where they finished third, and 16.63 points better than their free skate at Skate America.

“At Skate Canada, we skated with more confidence,” Vise said. “This next season, we will be out at those Grand Prix events and the goal is to medal.”

After winning the gold at the Midwestern Sectionals, the team headed to the 2007 U.S. Championships looking to take one of the top two spots on the podium and earn a trip to the World Championships.

“After the short program at nationals, we were pleased,” Vise said. “It was nice to finally get awarded what we deserve. We have finally proved that mirror skating works and is accepted by the judges.”

The team was in fourth place after earning 58.44 points for their short program.

“Nationals was exciting because we were in the final warm up for the first time,” said Trent, who has competed with a back injury since taking a fall in October. “It was also a disappointment because we did not skate our best and wanted so badly to win. We were both happy to land the quad in warm up and push through the event. Next year, we are in the hunt for gold.”

But the pair had two mistakes in their performance.

“It was unfortunate that I missed both throws in the program but mistakes and freak things happen,” Vise said. “On the throw triple loop, I caught my heel on the take off. We have never done that in practice or competition. The overall experience of Nationals was great.”

Vise and Trent finished fifth in Spokane, Wash., one spot higher than the year before.

The pair hopes to land the quad throw next season.

“It is our goal and hope to be able to incorporate it into both programs as it becomes more consistent,” shared Trent. The pair could be the first team to land the move in international competition.

“We definitely will be doing the throw quad Salchow this upcoming season,” stated Vise. “I would like to put it into the short program. The more experience of doing it in the program, the more experience I will have in getting comfortable in landing it with the music. We actually took some time off from the throw quad after Nationals to work on the triple and get a much smoother throw with equal height and distance. We are back to doing the throw quad and the technique is better and will help me get a more consistent throw.”

But the quad throw is not the only focus for the team.

“We are really working the style and artistry of the programs and incorporating a triple twist into the programs,” Trent said. “New programs are still in the developmental stages – no music yet. Any ideas people have would be awesome. We are considering keeping the long program and just tweaking the music a bit.”

In the midst of studying and training, Trent hopes to be able to squeeze in a marathon run.

“I have been aiming to do a marathon, but due to my back injury, have been advised otherwise,” said Trent, who also enjoys watching movies and traveling. “It has been quite a struggle to have severe back pain – something I have never had to endure in my life before.”

Vise competed in the P.F. Chang’s Rock N’ Roll Arizona Half 1/2 Marathon in Phoenix a week before the 2007 U.S. Championships. She completed the 13.1 miles in two hours and 20 minutes.

“I recently finished a mini biathlon,” said Vise, an avid fan of Grey’s Anatomy. “I swam 750 meters and then ran a 4k. Man was I tired after the swim! Before this race, I never have swum in a lake before. I was so happy to finish the race. It was a great accomplishment.”

Both Vise and Trent hope more accomplishments are to come.

“We both look forward to being on the Grand Prix circuit this year and making the world team,” Trent said. The team would also like compete at the 2010 Olympics.

“We take it year by year,” concluded Vise, “and we have to keep reminding ourselves that our placement is improving and that is what matters.”