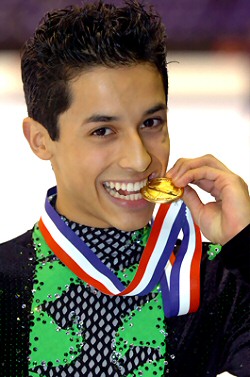 Eliot Halverson is coming off his most successful year of skating in his young career. Not only did the 16-year-old best a stellar field of men to win the gold medal on the junior level at the 2007 US National Figure Skating Championships, but he also placed in the top ten in his first trip to the 2007 World Junior Championships. Halverson joins his senior counterpart Evan Lysacek on a very short list of men who won the novice title one season at a US National Championship and then captured the junior title the following season.

Halverson began the 2006-07 season by winning two bronze medals on the Junior Grand Prix (JGP) circuit, sharing the podium with eventual World Junior Champion Stephen Carriere in both competitions. In most seasons, Halverson’s results would have been good enough to earn him a trip to the JGP Final, but Halverson had to settle for being the second alternate to the competition in a field that was choc full of men on a similar technical plane.

“It was a little disappointing,” admitted Halverson. “But I didn’t let it take away from what I had done (winning two medals), and I was still really proud of myself for skating really well.”

Halverson, who was born in Bogota, Colombia on Nov. 8, 1990, was brought to the United States in his adopted mother’s arms six months later on May 12, 1991 (Mother’s Day). He joined his older adopted brother Ian, who was also born in Colombia, into the Halverson’s home in Minnetonka, Minnesota. A few years later, the family welcomed Paraguayan-born Mariah to the family. In addition, Halverson has a step-mom, two younger step-siblings and a baby brother that round out his family.

Halverson credits the support and sacrifice of his family for his success. “Having such a big family, I have so many people who care about me and who are wishing me the best in my career,” shared Halverson.

Like many other young figure skaters, Halverson’s day is divided between the rink and the books. Halverson begins his day by skating a morning session before he begins his school day. As a home schooled student, Halverson has the flexibility to work his studies around his skating sessions. After a short lunch break, he returns to the rink for more skating, and then comes home for another round of school. A high school sophomore who attends school year round, Halverson freely admits that he has a passion for English, but does not like to study anything that relates to science.

Outside of skating and school, Halverson describes his interests as “nerdy”. Other than the occasional shopping trip and hanging out with friends, he likes to read the dictionary which could explain his other interest – watching the Scripps Howard National Spelling Bee on television each year. Though he has never participated in a spelling bee, Halverson watches them on TV every year. “I don’t have much time for anything else,” Halverson relayed. “Skating and school take up most of my time.”

“Being on the other side of the fence (instructing) was interesting,” acknowledged Halverson. “I was so nervous. Fortunately, she made my job very easy and skated a beautiful program.”

Looking toward the upcoming competitive season, Halverson has set his goals high – a practice which he and his coaches agree is something they need to do in order to push him to the next level. Halverson’s first competition this season will be a club competition in his hometown which will be used as a springboard for JGP Romania in early September.

Halverson plans to skate clean programs on his way to earning his first trip to the JGP Final which could result in a bye into the 2008 US National Figure Skating Championships – a competition he envisions as his first on the senior level.

“I want to have a good solid first year as a senior,” admitted Halverson, who would also like a return trip to the World Junior Championships. “My job is not done at that competition. There is still more for me to show.”

Halverson recently returned from Connecticut where he worked with his choreographer, former ice dancer Svetlana Kulikova, to construct his competitive programs for the upcoming season. Halverson, along with coaches Ted Engelking and Ann Eidson, decided that it would be a good idea to work with Kulikova again – not only because of his results from last season, but also because Kulikova and Halverson are such similar skaters.

“My coaches often joke with Svetlana and me that if we were closer in age (Kulikova is ten years Halverson’s senior), that we should be a dance team because we look so good together,” said Halverson.

Halverson enjoys the working relationship that he has with Kulikova. “We collaborate on the programs so that we both provide input and give feedback. Svetlana trusts that what I add to the program will be good.”

For the upcoming season, Halverson is returning to what he calls his “creative roots,” and will skate to music that is more traditionally associated with figure skating. He plans to skate to a “very passionate” tango for his short, and a classical piece for his free skate. Both programs are, according to Halverson, a departure from the comical style that he showcased in last season’s free skate to music from the soundtracks Tales from the Crypt, The Nightmare Before Christmas, and Beetlejuice.

“There is a lot of power and passion in these programs,” Halverson admits. “I think that I am keeping my same style, but I am taking it to the next level.”

On the technical side, Halverson plans to add the triple Axel to his programs, and will continue to make everything else “bigger”. Halverson is most proud of the two step sequences for each program that he and Kulikova created for this year’s programs.

“Men have to do two footwork sequences in each program,” explains Halverson. “Last year, we decided that I would repeat one of them, so I only had to learn three. This year we have four different steps and I really like them. I hope that we can keep all four of them through the end of the year.”

Looking further down the road, Halverson’s long-term goals include competing in both the 2010 and 2014 Olympic games, and winning a medal at the latter. Once he closes the chapter on his competitive skating career, Halverson admits that he always thought that he would like to be an interior designer, but now he is interested in marketing.

“When I watch TV,” explained Halverson, “I watch the commercials, and I especially like listening to the music in the commercials and how it relates to the product it is selling. I would like to be on that end of marketing or advertising.”