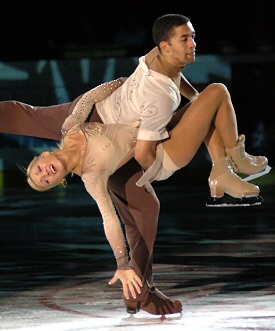 The 2006-07 season was a very successful one for Germany’s 2007 European Pair Skating Champions Aljona Savchenko and Robin Szolkowy. It was their best season so far, but it was also their toughest season.

They skated and competed, winning medals in each event they entered, but they also stood in the middle of the political conflict between their coach Ingo Steuer, the German Ministry of Interior Affairs, and the German Skating Federation.

The scandal erupted just prior to the 2006 Olympic Winter Games when the National Olympic Committee (NOC) of Germany looked into the past of officials and coaches. During the investigation, they determined that Steuer had spied on others as a young athlete in what was then the communist German Democratic Republic or “East Germany”.

The NOC judged the involvement of then 18-year-old Steuer with the East German Secret Police, the so-called “Stasi,” to have been so severe that he had to be excluded from the Olympic Team. However, Steuer, never the one to give up, went to court and won, forcing the NOC to accredit him. But the legal battle cost nerves, and the skaters who stood firm on their coach’s side, didn’t skate their best, finishing sixth.

The story continued during the 2006-07 season when the German Ministry of Interior Affairs, which provides the funding for Federations and athletes, advised the German Skating Federation to keep their distance from Steuer unless they risk loosing their funding. The goal was to separate the team from their coach, but Savchenko and Szolkowy wouldn’t comply, even when Szolkowy was kicked out of the German Army, which sponsors athletes. If anything, the whole affair strengthened the ties between Steuer and his students.

“After such a stressful season, it means even more to me that my students stayed with me. They know, why! I’m not a coach who gives up and I need athletes who realize my recipe for success,” Steuer commented.

Pressured by the Interior Affairs Department, the German Federation refused to accredit the coach for the first event of the season, the Nebelhorn Trophy, as well as for the Grand Prix competitions in China and in Russia. Savchenko and Szolkowy went to court, the judge ruled in their favor, and the Federation had to put Steuer on the list of the delegation. The team didn’t compete at Nebelhorn Trophy due to injury, but won bronze and gold at the Cup of China and Cup of Russia, respectively. Still, they had a hard time.

“I think I don’t realize yet what we had to overcome,” recalled Szolkowy. “My girlfriend sometimes didn’t know what to do to cheer me up. Sometime I felt like I was going crazy. I’m glad that the three of us kept it together and we still ended up on the podium. We’ve won each time we went to court, but you never know, it could have been different.”

Finally, the officials realized that their battle shouldn’t be fought at the expense of the skaters and of the German tax payer, and no court ruling was needed to accredit Steuer for the Grand Prix Final, European, and World Figure Skating Championships.

“It was a hard season, definitely, because of all the stress we had during our first competitions up to German Nationals,” explained Szolkowy. “That was a lot of pressure, obviously. Afterwards, it was an interesting season as it became better and better.”

At the Grand Prix Final in St. Petersburg, the Germans finished second with good performances, but the highlight of the season was the European Figure Skating Championships. Savchenko and Szolkowy led after the short program despite a fall on a throw triple flip, but then they put out a breathtaking free program to music from The Mission soundtrack by Ennio Morricone. The elements flowed, the side-by-side triple toe-triple toe sequence, the throws, lifts, spins – everything looked smooth and effortless, and the magical connection was obvious.

“It just went the way it has to go,” Savchenko recollected. “It was a great feeling to be on the top of the podium. All the stress and pressure we had gone through before were gone in that moment. We were proud of what we had done and of how well we’ve skated. I can’t describe this feeling.”

“It couldn’t have gone better,” added Szolkowy, “with the exception of the first element in the short program (the throw flip). But from there, everything worked out. We skated last in the long program, we made no single mistake and we won clearly. The elements and the feeling both were there. Nothing could have been better on that night.”

The goal then was to repeat a perfect performance at the World Figure Skating Championships, but it didn’t happen. While their short program was strong, the team made errors on the solo jumps in the free which resulted in third place overall. Still, the Germans were happy to have won the bronze medal.

“It is difficult to repeat such a perfect skate,” acknowledged Savchenko, “but you know now in your head that you can do it. I think it will give us more confidence in the future. We’ll have the confidence that we’re able to pull it off and that it isn’t as hard as we imagined. I believe we need just some more time. We could have been second at Worlds in Tokyo. The mistakes we did weren’t supposed to happen. It was like at Europeans in 2006 or at our first Europeans in 2005 (where they made errors as well). It’s a question of time.”

Coach Steuer added: “This last season proved that Aljona and Robin are one of the top couples of the world. The results confirmed my work and that I took the right decisions.”

Preparations for the 2007-08 season are well under way.

“We have to do something new,” announced 23-year-old Savchenko. “We can’t just repeat our programs – we have to come up with new ones. We had this free program for this season and its time has passed. I want to do the throw quad Salchow or the throw triple Axel. I’m mentally ready for that and you have to be in order to manage these elements.”

The European Champions plan to compete in the Nebelhorn Trophy which will take place September 27-29, 2007 in Oberstdorf, Germany, as their first event of the new season. The team also has been assigned to the Grand Prix events Skate Canada in Quebec City and to the Cup of Russia in Moscow.

Savchenko, Szolkowy, and Steuer went through a lot last season, they also received also support from private sponsors and fans. A car dealership in Chemnitz employs the skaters on a part-time job basis and gives them the opportunity to earn some money. Figure skating friends founded a club for the promotion of figure skating in Germany and opened a website through which fans and sponsors can support the skaters.

“This project wants to support the three of us until 2010 and wants to help us to get to the Olympic Games in Vancouver,” 27-year-old Szolkowy explained. “The first goal was to provide us with financial independency so that we could focus on training. Now the project is growing more and more into a communications and information platform on the internet. The club is in Berlin and the people who are working on the project come from all over Germany.”

“This project shows us that there are people with us and that we aren’t alone,” added Savchenko. “That gives us strength. The worst thing last season was the lack of support. You’re working so hard, you’re giving everything, and then suddenly someone wants to take it away from you. Obviously we are experiencing a lot of stress sometimes, but then we think of the people who are behind us and we’re getting stronger again.”

For next season, at least the political battle is over. In May 2007, Joachim Gauck, president of a newly founded commission within the NOC to deal with “Stasi” questions (Steuer isn’t the only one to be affected, a number of former East German athletes, coaches and officials are) suggested to accept Ingo Steuer as the coach of Savchenko and Szolkowy. The couple and their coach can now focus entirely on their practices and preparations.

“It looks like the situation is more relaxed now,” explained Steuer, “but the financial questions are still completely open. We are glad to have found some financial security with the Pixeleis project and I want to thank everyone who takes part in it.”

The next season has already started. Savchenko and Szolkowy debuted their new short program to music from the Asoka soundtrack (an Indian Bollywood Film) on July 7 at a club show in their home town of Chemnitz.

“I got the idea thanks to these movies,” coach Ingo Steuer explained when asked how he found this unusual piece of music. “I watched some of these movies last year and I received the CDs as a birthday present.”

According to spectators, the program is very original and elegant. Aljona wore a blue costume in Indian style and Robin a flesh-colored shirt and white trousers. Their free program is still under construction and the skaters and their coach are not yet ready to reveal the music.