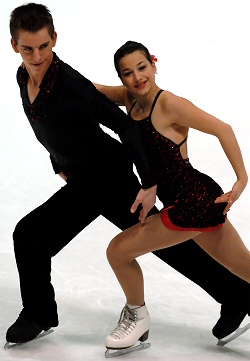 Amanda Velenosi and Mark Fernandez, who teamed up in 2006, perform to Ernesto Lecuona's Malaguena for their Short Program at the 2007 World Junior Figure Skating Championships.

Quebec skaters Amanda Velenosi and Mark Fernandez, who teamed up in 2006, won the silver medal in junior pairs in their first showing at the 2007 Canadian Figure Skating Championships.

The pair also placed sixth the at JGP Chinese Taipei Cup and capped off their year with a sixth place finish at the 2007 World Junior Figure Skating Championships in Oberstdorf, Germany. It was their first ISU championship competition.

Velenosi, 15, began skating when she was three. She also participated in gymnastics for six years, winning the floor exercise and placing third overall at Provincials in her division, but stopped when she was 12 because it took too much time for both sports. She landed her first triple jumps, the toe loop and the salchow, that year. She is slated to compete in the junior ladies discipline during the 2007-08 season after placing 11th at the 2007 Canadians in the novice division.

Fernandez, who just turned 19 this month, didn’t start skating until he was six. “My older sister skated and I’m pretty sure that’s how I got into it,” he said. He started with figure skating, not hockey, although he does play an occasional pickup game. He also tried baseball and played forward on his school and city soccer teams until he started skating with Velenosi. Fernandez landed his first triple salchow at 14 and competed in junior men until the 2006-07 season.

He was eleven when he began skating pairs with Kristen Lambrinakos-Raymond, with whom he finished fourth in juvenile pairs at Nationals in 2001 and ninth in pre-novice in 2002. He then teamed up with Jennifer Thibodeau, placing fourth in pre- novice in 2003 and fourth in novice in 2004 before winning the novice title in 2005.

“Jennifer quit skating and I wanted to continue,” Fernandez explained. “Valerie Saurette was coaching Amanda and she suggested to Manon Perron that we do a tryout. It was the only one I did.”

“I had wanted to try pairs but thought I’d never get to do it,” Velenosi added.

Annik Douaire and Valerie Saurette train the couple in Montreal, where both skaters were born. They practice for two hours a day on the ice for pairs plus another half hour off ice, five days a week. She also does another two hours of singles training and he does another hour a day.

Jean-Pierre Boyer and Sylvie Fullum choreographed their 2006-07 programs, both of which were new. Their short program was to Malaguena by Ernesto Lecuona, while their long program was to music from the soundtrack of Lawrence of Arabia by Maurice Jarre.

“It’s hard to choose music for a new team,” said Saurette, who found the music for both programs. “The long program is powerful music that suits them well. The short is slow music, but I liked it.”

For the 2007-08 season, the team will be keeping their short program from last year. Julie Brault choreographed their new long which will be performed to Concerto en Fa. They are currently scheduled to compete in September at the Tallinn Cup in Estonia.

Off ice, Velenosi enjoys listening to all kinds of music except “cowboy songs,” while Fernandez listens mostly to rock. He has tried both guitar and piano, while she used to play the flute. She likes to play soccer with her brothers, go to movies, and chat on the computer. Fernandez enjoys playing soccer, tennis and golf. “I spend a lot of time on line surfing and chatting,” he added.

Fernandez recently completed his DEC (Diplôme d’Études Collégiales) in Pure and Applied Science and will be starting in the Civil Engineering program at Concordia University in September.

Velenosi will be a sophomore this fall at Glory Senior High School. She likes computers but has not thought of a future career.