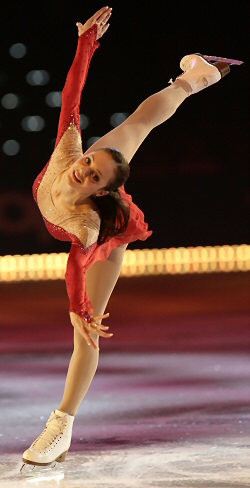 Sarah Meier performs to More Than a Woman by Robin Gibb at an Art on Ice show in Zurich, Switzerland.

This past season led to an international breakthrough for Sarah Meier. The 23-year-old Swiss qualified for the Grand Prix Final, took the bronze medal there and went on to claim the silver at the European Championships. It was the first European medal won by a Swiss lady since Denise Biellmann captured the title in 1981. Meier finished her season with a strong 7th place at Worlds as the second best European lady.

“Looking back now, I certainly can say that I had a successful season,” said Meier. “I didn’t quite realize it during the competitions, and I was even a little disappointed at Europeans at first. But now I am really happy.”

The athlete summarized and analyzed the reason for her success modestly: “I trained really hard last summer, didn’t have any serious injuries, and I didn’t have to take a break. I was very focused on my goals. Many people wouldn’t have expected this success from me, but I have always believed in myself. I found out that I’ll show my best performances when I set ambitious goals for myself and put myself under a lot of pressure.”

The multiple Swiss Champion led after the short program at Europeans but then was beaten in the free skating by the eventual European Champion – Carolina Kostner of Italy. “Today I’m obviously happy with the silver medal and I don’t think about the “lost gold” anymore. It is correct as it was. Carolina clearly was the best skater and she deserved to win,” Meier pointed out while openly admitting that she was disappointed with the outcome at first. “I knew I should have been happy, but in that moment I just couldn’t be.”

Meier’s success this year resulted in more attention and invitations to exhibition galas and other events. “It needs a lot of coordination to accommodate everything,” she explained. “Of course it’s nice and I don’t complain in any way, but nothing has changed in my training and in my surroundings.” The Swiss performed in some shows after the World Championships and then competed in the Japan Open in April. “After that I took some rest at home,” Meier recalled. “In the beginning of May, I started the training process by building up strength and endurance with my off-ice coach.”

Meier then went to Oberstdorf where she worked on her new programs with (choreographer) Salomé Brunner. In July, she took part in a summer training camp in Flims, Switzerland and after this went for two weeks to a camp of Alexei Mishin in Jaca, Spain until August 19. Nevertheless, she views the summer training period as a kind of relaxing time. “Even though I have been training the past months, I still had more freedom,” stated Meier. “When there is no competition pressure and I know that I still have a lot of time before the start of the season, then I can take more time to go out with my friends and do other things. Maybe I’ll go on a vacation somewhere at the sea in August to get some new energy after the summer training and before my first competitions.”

Meier’s Grand Prix events will be the Trophee Bompard in Paris in November and the NHK Trophy in December in Japan. “I am pleased with these competitions,” she said. “I try not to look forward to a special Grand Prix because we don’t have any right of determination anyway. I have been to Japan often and I love to go there and to compete.” She names qualifying for the Grand Prix Final in Torino as one of her goals for the upcoming season. “However, more important for me in the Grand Prix series is to land a triple-triple combination in my programs,” Sarah underlined.

The skater now fully focuses her energy and time on the sport and has laid off her studies in Biology. “If I had continued studying as slowly as I did (half the workload and 16 hours a week), I would have needed eight years to get my diploma,” Meier explained. “My training also has suffered from that. So I thought, ‘I’d better become a full-time skater for four years and then I still can be a full-time student for four years’. So far it has been the right decision and I never regretted it for a second.”

The athlete found the necessary support for her decision in her family as she is hails from a real skating family. Her mother was a hobby skater, her aunt Eva Fehr was a competitive skater and is now her coach, and her father and uncle play ice hockey. Her sister is member of a synchronized skating team and her cousins are also chasing the ice hockey puck. “I simply came through my parents to figure skating,” explained Meier. “It was natural that I started to skate with them as I was at the ice rink all the time. But if I hadn’t liked it, they surely wouldn’t have forced me to skate. I have been on the ice ever since I remember, but I like it. I never wanted to do something different, I never questioned it. My parents just gave me the opportunity to try skating.”

The athlete vividly recalls watching skating competitions on TV as a child, and back then she never thought that it would be possible for her to be part of such a competition one day. “I didn’t think as far, and suddenly I was there,” Meier said with a smile. She drew attention first in 2000 when she finished third at Junior Worlds in Oberstdorf and when she came in 5th at the 2001 European Championships in Bratislava. However, the Swiss then struggled with injuries and wasn’t able to practice fully or challenge for a medal again until 2006. But once she was healthy and decided to focus on skating two years ago, her career went uphill. Meier finished fourth at the 2006 European Championships in Lyon and left an excellent impression at the Olympic Games in Torino and Worlds where she finished eighth and sixth respectively.

The perception of figure skating in Meier’s home country also changed. For a long time, figure skating didn’t play a major role compared to other popular sports such as soccer and ice hockey. That has since changed due to the success of two-time World Champion Stéphane Lambiel. “Figure skating is much more popular now and people accept it more as a sport,” Meier relayed. “Many people are telling me that they think it’s great or they think it’s great what Stéphane does. So I also get some attention because the media is writing about him and then they add something about me as well. People also started to accept skating as an athletic sport and don’t regard it as ‘hopping around on the ice a little bit with nice costumes’ anymore. It’s a nice feeling that your work is accepted also by other athletes and that they won’t snigger at you. When you say in Switzerland that you are a professional athlete, people would ask, ‘And what are you doing for a living?’ If you are a soccer or ice hockey player it’s obvious that this is a profession, but as a figure skater people would expect you to have another job. This is getting better now.”

Meier names five-time World Champion Michelle Kwan as her role model in figure skating. “She isn’t competing now, but I was always rooting for her and I like to watch her,” she divulged. “She has always been my favorite skater. I like the way she puts emotions out on the ice and how she incorporates different roles in her programs.”

The 2006 Cup of Russia Champion views herself as a well-balanced skater. “Right now I’m quite consistent,” revealed Meier. “I don’t make many mistakes. It’s working well with the levels (of the elements), too. Although my spins aren’t the best, I still got very good levels. I also got good levels for the footwork. This is something we have worked on a lot, however, I believe I still can improve in all aspects of my skating.”

The friendly and likeable Swiss likes to read in her spare time and enjoys other sports. “I like playing tennis, swimming, and cycling,” Meier said. “I just like to move. I enjoy snowboarding as well, but unfortunately I don’t have much time for it.” She also loves to cook. “I’m still living at home with my parents and I’m mostly cooking for my family because my parents are working.”

Meier’s long term skating goal is to compete at the 2010 Olympic Winter Games in Vancouver, and she also sees her future linked to the sport. “I will have to see, but I’ll certainly stay involved in the sport, maybe as a coach,” she acknowledged. “I’d also be interested in taking care of the off-ice activities of skaters as a kind of off-ice coach. I was always looking for someone who could offer a complete package so that I didn’t need five people – one for the ice, one for endurance, one for physiotherapy, one for choreography and so on. It would be a dream to offer such a complete support for a skater.”

But for the moment Sarah Meier will focus for next season on good performances and her own way up.