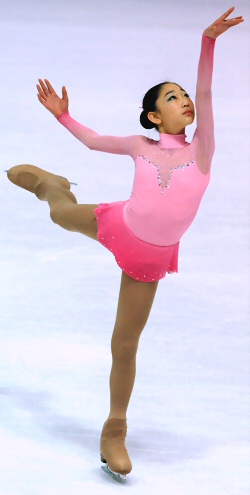 Mirai Nagasu surprised everyone when she won the junior ladies title at the 2007 U.S. National Figure Skating Championships.

USA’s Mirai Nagasu had failed to make it out of Regionals the previous season. “I skated really well until Regionals,” Nagasu said, “but then I got overconfident and didn’t make it to Sectionals. I learned I had to work harder.”

After nationals, Nagasu went to her first international event – the 2007 World Junior Figure Skating Championships in Oberstdorf, Germany, where she finished a close second to Caroline Zhang, who also won the ISU Junior Grand Prix Final.

“Mirai’s success was unexpected,” said coach Charlene Wong. “It was surprising how quickly everything came together for the season. “Mirai has a unique style and she needed to be encouraged to bring it out.”

This season, Nagasu will compete as a senior at Nationals but plans to compete as a junior internationally. She is currently scheduled to compete at the upcoming JGP event in Lake Placid, NY from August 30-September 2, 2007. “I just want to skate my best and have fun. I’m trying to take things one step at a time.”

Nagasu was an active youngster. “I used to play golf,” she said. “One day when it was raining, I went skating with my parents. After that, I thought golf was boring and figure skating was more fun.” She was five at the time. Nagasu also practiced tennis in the parking lot of her parent’s restaurant, hitting the ball against the restaurant’s wall.

The 14-year-old landed her first double Axel and all five triples when she was eleven. “It took a long time to get the double Axel,” Nagasu recalled. “Natasha Kuchiki’s father helped me with the double Axel. I call him the ‘jump doctor’. Then all the triples came at the same time. I’m trying the triple Axel now in practice. It’s fun.”

Charlene Wong heads the team coaching Nagasu, who trains in Burbank, California. She has been working with Nagasu since October 2006. Bob Paul has also worked with Nagasu as long as she has been skating. In addition, Sondra Holmes and Sashi Kuchiki works with her on her jumps. Nagasu works on ice for two hours a day, six days a week but doesn’t do anything off ice except ballet. “Mirai’s the most disciplined athlete I’ve ever worked with,” Wong said. “Her family keeps her really grounded. “I look for her to do really exciting things.”

Susan Austin choreographed Nagasu’s 2006-07 programs using Shout and Feel It by Benny Goodman from the Swing Kids soundtrack for the short and American Quartet by Anton Dvorak for the long. “Susan picked all my music last year,” Nagasu said. “The long program was new last season, but the short program is something I used in novice. I didn’t want to have to learn a new short program because it was my first year in juniors and I had to learn all the new jumps for the long program. I like upbeat and powerful music because it makes me skate harder.” Her exhibition program was to a vocal version of A Dream is a Wish Your Heart Makes by the Cheetah Girls. “The words really fit her,” said Wong.

This season Nagasu will be performing to I’ve Got Rhythm for her short and Coppelia for the long. Lori Nichol choreographed both programs.

Nagasu recently graduated from Foothills Middle School. Her favorite subject is mathematics. She was on the robotics team at school and worked on the design of the team’s robot as well as their team shirt and poster. They finished 40th out of about 60 teams at their regional competition. Nagasu plans to go to college, but hasn’t decided what she wants to study.

She enjoys going out with friends, reading and knitting. I read a lot,” she said, “mostly fantasy and realistic fiction. I also watch a Japanese television show that shows people working really hard in different sports.” Nagasu collects stuffed monkeys and has a pair of peach faced lovebirds as pets. Nagasu is a big fan of Japan’s Mao Asada and has Asada’s autograph on one of her boots.

For more information, you can visit the her official website.