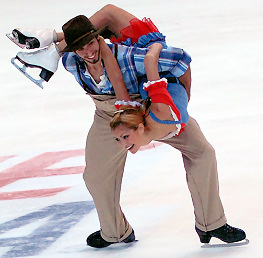 USA’s Tanith Belbin (23) and Benjamin Agosto (25) maintain the lead in Ice Dance after performing an ‘Appalachian Hoedown’ in the Original Dance.

Competition continued today at Skate America with the Original Dance (OD), which was a hit with the skaters and the audience alike. The OD for the 2007-08 season is the Folk-Country dance. For the first time, the competitors had the opportunity to choose from a multitude of folk dances that not only allowed the skaters to express themselves as they wish, but also allowed the audience a glimpse into different cultures through the music, movements, and costumes of the colorful and sometimes brave competitors.

Leading the pack were overnight leaders Tanith Belbin and Ben Agosto, who dressed in hillbilly garb, skated to a blend of bluegrass and country waltz music that was an immediate hit with the audience.

The U.S. champions studied for their program as if it were a college examination – exhausting books, video, and internet resources on the subject.

“We searched everywhere for music that represents the American spirit,” explained Belbin. “And we thought that this program would be a good vehicle to present American folk dancing. Belbin went on to explain the costumes that they chose for the competition. “I actually found both of our costumes on the internet, using the designs of a high fashion designer called D-Squared. Ben’s costume is, believe it or not, an exact replication of something from the runway.”

Not only was their ‘Appalachian Hoedown’ program extremely entertaining, it was also very challenging on a technical level in that each of their elements earned the sought-after level four from the event’s Technical Specialist.

Belbin and Agosto began their program with a combination spin reminiscent of the music and continued to perform an energetic program which seemed to fill the arena with smells of hay bales and moonshine.

“The fact that you have such a wealth of choices frees you up as an artist,” said a happy Agosto. “We know that we need to work on gaining more speed on our elements, but that will come with repetition.”

The two-time and reigning World bronze medalists scored 59.24 points, well off of their personal best of 67.54, but still lead the competition by 3.76 points with a total of 95.27 points overall.

Nathalie Pechalat and Fabian Bourzat of France held onto second place with a passionate and sexy flamenco from music by Guadiana and José Mercé. The team used a prop fan to compliment Pechalat’s vigorous movements to the staccato-like music and the duo earned positive GoEs on five of the six required elements to score a total of 59.95 points.

“We are glad to be here, both in placing and physically,” stated an excited Bourzat. “We love our OD and we think that this is a good dance for us.”

The French silver medalists trained in flamenco in Madrid, Spain, in preparation for this program, and tried to get as close to real thing as possible.

“My costume was designed there,” shared Pechalat. “We worked to make sure that everything was authentic.”

The team’s total score of 91.51 puts them within striking distance of the top spot going into the free dance.

Italy’s Federica Faiella and Massimo Scali produced an interesting pizzica (Italian folk dance) using music from the Solento area of their homeland. For geography buffs, that is the commonly referred to as the heel of the Italian boot. The two-time Olympians again showed improved difficulty in each of their elements, matching the French team with their technical score. Lower scores on the program components, however, kept the Italian champs from moving up in the standings. They earned 54.56 points and remain in third place with a total score of 85.99 points.

“We were very comfortable on the ice with this very typical Italian folk dance,” said Scali. “We want to be ready to compete and we want everybody to know that. We are working hard and I think that we have improved. We know that there is more to work on and we will keep working to make that happen.”

Moving up to fourth place was the young American team of Meryl Davis and Charlie White, who skated to the Russian folk standard Kalinka. Donned in costumes representative of the rhythm, complete with a Russian military hat worn by White, the duo skated a clean program that was technically difficult but which lacked the power and maturity of those ranked ahead of them.

“We wanted to do a dance that was suitable in contrast to our free dance,” explained Davis. “We have practiced this dance a lot, but we know that we still have much room for improvement.”

The U.S. bronze medalists, known for earning level fours on all of their elements in this phase of the competition, fell just one element short with their performance, earning a level three for their rotational lift. Still, the team moved up one spot with a segment score of 52.84 and a total of 83.00 points overall.

In sixth place are the current U.S. pewter medalists Kimberly Navarro and Brent Bommentre who performed an African Folk Dance that mesmerized the crowd with its authenticity of character. The duo, dressed in skirts and wearing tribal makeup, used fascinating choreography given to them by Michael Velez – a dancer in the Koresh Dance Company in Philadelphia – to maintain their position from the compulsory dance.

Navarro and Bommentre have been taking frequent classes in Afro-modern dance from Velez in order to prepare for this dance – a practice that they plan to continue throughout the season.

“We researched this dance as much as we could,” declared Bommentre. “And all of the information that we found indicated that I should wear a skirt. So, I decided that I would wear it.” Navarro added: “We had to work within the ISU rules, though. Technically, I shouldn’t be wearing a top.”

After the competition, the team will return to dance class and consult with Velez who will, according to Navarro, “See what we did well, and help us to build on what we have done.”