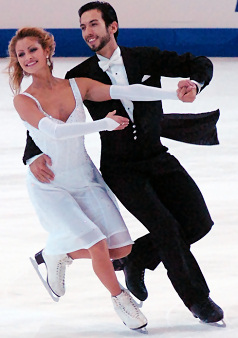 Skate America is the first of six events of the International Skating Union (ISU) Grand Prix (GP) series and is being held at the Sovereign Center, Oct. 26-28, in Reading, Penn.

Approximately 57 skaters from 13 different countries are competing for points and global prize monies totaling $180,000 in U.S. dollars. The points will go toward qualification for the Grand Prix Final of Figure Skating in which the top six competitors from each discipline will be invited to compete for a total purse of $272,000 U.S. dollars.

The skaters were seeded and invited for the six GP events according to the results of the 2007 World Figure Skating Championships. Competitors who finished first through sixth place in each discipline are considered seeded and are assigned to two GP events by drawing, while those who placed seventh through 12th, are invited.

Should one of the top six from 2007 Worlds retire or opt out of the GP, then the next highest ranked skater becomes seeded.

Next priority is given to skaters who achieved a seasonal best score which was equal to or better than those who placed seventh through 12th at the ISU World Championships 2007. If vacancies still remain, then competitors who placed 13th and below at the 2007 World Figure Skating Championships are selected in order of placement.

Pair teams can compete in a third event if there is an open slot, however, it is considered “non-scoring” in terms of points. Prize money still applies according to placements.

Skate America kicked off on Oct. 26 with the Compulsory Dance.

The Compulsory Dance (CD) of the event was the Austrian Waltz, which consists of two sequences and was created by the Austrian brother-and-sister team of Susi and Peter Handschmann. It was first performed in 1979.

U.S. Champions Tanith Belbin and Benjamin Agosto skated like World Championship contenders, finishing in first place and easily outdistancing their competitors with a score of 36.03 points. Skating last of the ten couples under the new ISU ‘s start order-by-world ranking rule, the two-time and reigning World bronze medalists displayed deep edges that seemingly melted the ice around their sure-footed blades.

The Austrian Waltz is known as one of the most difficult compulsories and has been a challenge to the duo that is making their season debut in this event. It is characterized by elegance of line combined with the typical lightness of the Viennese Waltz. It should be performed with strongly curved edges, bending of the skating knee and wide extended movements of the arms and free legs while maintaining a soft flow throughout the waltz.

“Compulsories are like piano scales,” described Agosto. “There are no short cuts. You get better with repetition, and Tanith and I feel like it is finally coming together for us.”

“The dance felt really strong,” added Belbin. We tried to make a lot of improvement to the tightness of our positioning and extensions. The greatest critique we can have at this point is – it can be more waltz. It was a little conservative, but it was very solid. It was a good start.”

Nathalie Pechalat and Fabian Bourzat of France scored a new personal best of 34.56 points for a second place finish. The French silver medalists exhibited strong body lines complimented by willowy upper bodies that captured the feel of the waltz rhythm. The team, who earned bronze at last year’s event in Hartford, Conn., hope to improve on that placement.

“We are happy with our position,” declared Bourzat. “Now we will work to keep it.”

In third place are the always-entertaining Italian team of Federica Faiella and Massimo Scali. The two-time Olympians skated with a light-hearted lilt to their steps and a new confidence, earning a score 31.43 points for third place. While they are in a medal position, the Italian champions will need to keep a peripheral eye over their shoulders and focused on the Azerbaijani team of Kristen Fraser and Igor Lukanin who finished just .24 of a point behind (31.19 points).

The American team of Meryl Davis and Charlie White placed a disappointing fifth place (30.16 points), but are better known for their difficult programs later in the competition. Teammates and local favorites Kimberly Navarro and Brent Bommentre are currently in sixth place.