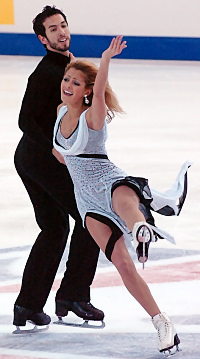 USA's Tanith Belbin and Benjamin Agosto perform their first 'classical' piece to a compilation of music by Chopin.

With nary a challenge from their nearest competitors, Tanith Belbin and Ben Agosto ran away with the gold medal with a performance that earned the four-time U.S. champions a partial standing ovation from the crowd in Reading, Penn. France’s Nathalie Pechalat and Fabian Bourzat held on to claim the silver, while Italians Federica Faiella and Massimo Scali earned bronze.

Skating to a compilation of music composed by Frederick Chopin, Belbin and Agosto earned 97.68 points for the program that represented a feeling of being in a dream.

“What we are trying to portray is the ideal dream of what love should be in everybody’s mind before they live their lives and become jaded,” explained Agosto.

The music arranged by Emmy Award winning composer Joseph LoDuca represents the first piece of classical music that the reigning Worlds bronze medalists have used since their debut season in 1999, and showed a new sophisticated style that brought a new dimension to the team’s skating.

“We felt that we had the time to devote this year to improving our skating to the level that it would be able to accent classical properly,” shared Belbin. “When we started choreographing, the program came together so quickly that everyone agreed that this could become something special.”

Belbin and Agosto were rewarded with level fours for seven of their eight elements, falling short only on the midline step sequence in which Agosto made a minor miscue.

“This is the probably the best debut of a free dance that we have had in quite a few years,” said a delighted Belbin. “We not only got the feel for how much potential this program has, but also how enjoyable it is to perform it.”

Pechalat and Bourzat skated to a theme program entitled “Craziness” in the dance style of vogue in which Pechalat portrays a woman working through the different stages of insanity. Bourzat played the role of the slightly off-center man who attempts to contain her. The duo scored a total of 90.33 points for the program and 181.84 points overall to shatter their previous personal best by more than 14 points. Bourzat attributes their meteoric increase in score to making changes in the off-season.

“We worked with Alexander Zhulin on choreography this summer,” relayed Bourzat, “and we made other changes that worked out for us. Change is good.”

Faiella and Scali skated an avant-garde program to music from the movie soundtrack Yentl, but instead of using the story associated with the Streisand film, the team opted to present the life cycle of a butterfly.

“We realized that we could really play with the arms and hands with this music,” Scali explained. “It gave us the feeling of something that was flying, so that is how we approached the choreography.”

The program opened with Faiella representing the butterfly leaving the cocoon, but the mood was quickly lost as Scali fell on a three turn shortly after the music began.

“My mistake was something that broke the feel of the program,” said a disappointed Scali. “When the mistake is at the beginning of the program, it is difficult to overcome, but we have practiced a lot for this competition, so we were prepared for everything.”

Finishing just out of medal position in fourth place were U.S. bronze medalists Meryl Davis and Charlie White, who skated a dark program to an instrumental version of Eleanor Rigby/ Eleanor’s Dream by Paul McCartney. The team, known for earning the highest level on all of their elements, fell short today in earning just level three on two of their elements: the serpentine lift and the midline steps in which Davis fell behind her more polished partner.

“We’re definitely further along than we were at this point last season,” declared Davis, “but we have a lot to work on, and we know that we can improve.”

Americans Kimberly Navarro and Brent Bommentre finished in sixth place with an emotional performance to Corinne Bailey Rae’s rendition of Since I’ve Been Loving You.

“Brent has always wanted to skate to Led Zeppelin’s version of this music,” explained Navarro, “but I thought it was not appropriate for us at this time in our careers. When I found this version, I knew that this is what we had to skate to.”

Dressed in more traditional costumes than in their African Tribal original dance, Navarro and Bommentre conveyed the story of two lovers trying to break free of each other using the ice as a backdrop to this heartbreaking story.

“At the end, we kind of give up on giving up and decide to stay together,” Bommentre said.

Belbin and Agosto, who earned 15 points, will share the ice again with Faiella and Scali (11 points) at Cup of China.

Pechalat and Bourzat (13 points) are scheduled to compete next at Cup of Russia.