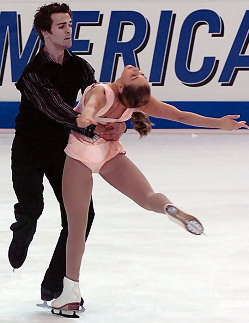 Jessica Dube (20) and Bryce Davison (21) skate to The Blower's Daughter by Damien Rice, placing first in the long program and overall.

With no expectations of placement, Canadians Jessica Dube and Bryce Davison came into the 2007 Skate America competition with simple goals; to earn 60 points in the short program and 110 points in the freeskate. Not only did they exceed their own goals in terms of score, but in the process they won the competition over the more experienced Chinese team of Qing Pang and Jian Tong.

“We knew that we could strive to be close (to the Chinese),” Davison said excitedly. “We didn’t know that we would be this close!”

Dube and Davison skated a spiritual and haunting program to The Blower’s Daughter by Damien Rice that began like a dream. Opening with a clean double twist that moved into an easy double Axel-double Axel jump sequence, the Canadian champions captured the audience from almost the first beat of the music. As the program progressed, however, the team started to make errors on some of the high scoring planned elements. Most notably, while Davison landed a clean triple Salchow, Dube was only able to manage a double which cost the team valuable points. Additionally, Dube fell on the throw triple Salchow, taking a mandatory deduction as well as negative GoEs. Nevertheless, they earned a new personal best score of 112.46 for a total score of 173.26.

“I don’t know what happened (on the triple salchow),” admitted Dube. “I thought that I was going to land it, but it just got away from me.”

Luckily for the Canadians, Pang and Tong not only made technical mistakes, but they also performed elements that earned generally lower levels from the technical caller. The three-time and reigning Four Continents silver medalists began their Romeo and Juliet program with a nice set of triple toeloops, but quickly blew the momentum by singling both jumps in a planned double Axel-double toeloop combination. Pang went on to land the throw triple salchow, but fell to the ice on their second throw jump – a triple loop. The team maintained second overall with a total score of 165.19 points.

“We are very tired,” confessed Tong. “Today is better than yesterday, and we will try our best to improve before our next competition.”

Tong later explained that they wished to arrive to Reading earlier, but the airline tickets that they received for the event had them arrive at 4 A.M. the day prior to the short program. Citing jet lag, the team said that should they be assigned to Skate America in the future, they will ask for an earlier arrival time.

Skating in their first senior event, Russians Vera Bazarova (14) and Yuri Larionov (21) earned the bronze medal in their third international competition in as many weeks. The pair has already competed twice on the Junior Grand Prix circuit, winning gold and silver medals which qualified them as the top seed for the Junior Grand Prix Final in December. The team skated admirably for their first outing at this level, but finished their program noticeably ahead of their music.

“We have been traveling so much and competing on the junior circuit that we haven’t had much time to work on the senior program,” stated Larionov. Bazarova added, “We just put the additional lift into the program recently, and we have only skated this long program a few times before tonight.”

Still, the 2007 Junior World silver medalists earned an impressive 102.82 points for their routine to music from the Eragon soundtrack which featured strong spins, a nice split triple twist, and a double Axel-double Axel sequence.

As the top ranked American team in this event, Amanda Evora and Mark Ladwig performed about as well as they have in recent history to Maurice Ravel’s Daphnis and Chloe, placing fourth. The couple started out slowly, earning negative GoEs on their first four elements, but regrouped to finish strong with a nice throw triple loop to go with their level three and four lifts.

“We had errors, but it was a good fight for us,” declared Evora. “We have to do something different than everyone else, and right now we are still working to be able to complete each element in the program.”

Evora and Ladwig earned 94.22 points in the freeskate, a new personal best for them, and 140.40 points overall which also eclipses their previous personal best.

“We now know how well that we can skate,” proclaimed Ladwig. “We know that we belong at this level, and we know that when we put it all together we will be competitive.”

Teammates Meeran Trombley and Laureano Ibarra were crowd favorites on this evening, executing a high-flying split triple twist with a Lutz entry as well as a nice throw triple Salchow. However, the team was downgraded on their side-by-side jumps, and Trombley fell on the throw triple loop. Based in Colorado Springs, the team earned a personal best 86.94 points in the freeskate and 132.43 overall to finish in fifth place.

Dube and Davison earned 15 points toward the Grand Prix Final, and will compete again next week at Skate Canada, while Pang and Tong (13 points) will compete next at Cup of China.

This was a solo Grand Prix event for Bazarova and Larionov who earned 11 points.