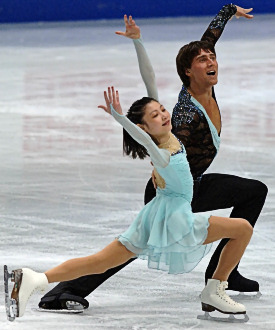 Yuko Kawaguchi’s biography would actually be enough for three skaters. She first competed as a single skater for Japan at the international junior level before teaming up with Russian skater Alexander Markuntsov. Kawaguchi and Markuntsov represented Japan and won silver at the 2001 Junior World Figure Skating Championships. They were the first Japanese pair team to ever medal at an ISU championships.

After their partnership dissolved in 2003, coach Tamara Moskvina returned to her home in St. Petersburg, Russia to teach and Kawaguchi followed behind. She teamed up with two American skaters for a brief stint and was eventually paired up with Alexander Smirnov during the spring of last year. Full of determination and ambition, it is not surprising that the new team saw success quickly.

Kawaguchi and Smirnov were selected to compete at the 2006 Cup of Russia where they captured the bronze medal. They seemed poised for a medal at Russian Nationals, but suffered a setback when Kawaguchi broke her ankle on Christmas while practicing a throw triple loop. The team also missed Europeans due to the injury, but later earned a berth to Worlds and were healthy enough to compete.

“I wanted to compete at Worlds so much and travel home, to Japan!” Kawaguchi recalled. “Worlds were in Tokyo, close to my home, and I wanted to be there, no matter what.”

Kawaguchi became the first foreigner to represent Russia for figure skating at a World Championship. The couple surprised everyone with a fourth place finish after the short program which included many level four elements.

“I was very pleased with our personal best score that night,” recalled Kawaguchi, adding that she was proud to have been able to represent Russia. Smirnov agreed. “Our presentation was good that night and the audience was great.”

Going into the free skate, the team suddenly found themselves in the last warm up group. Smirnov had never even competed at a European or World championship before. The biggest event he had gone to was Junior Worlds in 2006.

The couple made a few mistakes and finished in 9th place overall, but was still the top ranked Russian pair team. Maria Petrova and Alexei Tikhonov, who were 11th after the short, withdrew due to injury. Maria Mukhortova and Maxim Trankov were 11th overall.

“It was amazing,” said Kawaguchi of their first Worlds experience. “We learned a lot there.”

Kawaguchi, Smirnov, and Moskvina are hoping for better results this season and have worked hard for it all summer while training in St. Petersburg. “Our goals are to make the Grand Prix Final, to fight for first or second place at Europeans, and to fight for a spot on the podium at Worlds,” Kawaguchi summarized.

They kicked their season off at a national competition in Samara at the end of September and won, but there was not much competition there. They are currently slated to compete at Coupe de Nice later this week, and then are scheduled for Skate Canada and Cup of Russia.

With the help Russian-born former U.S. Ice Dancing Champion Peter Tchernyshev, Moskvina and her skaters have put together a new free program to music from the Love Story soundtrack. Moskvina expects the Canadian press to ‘jump’ at them as the music was made famous by Canadian sweethearts Jamie Sale and David Pelletier – rivals of her students Elena Berezhnaya and Anton Sikhuralidze. Most will recall that both teams ended up with an Olympic gold medal at the 2002 Olympic Winter Games in Salt Lake City when a judging scandal erupted.

Kawaguchi and Smirnov also got a new short program to a Greek Sirtaki, but felt it wouldn’t work and have decided to stay with last year’s Rondo Capriccioso by Camille Saint-Saens.

But how did a Japanese girl end up in St. Petersburg skating with a Russian partner for Russia? This story started almost ten years ago in Japan, when Kawaguchi watched the 1998 Olympic Winter Games in Nagano. She was fascinated by pair skating.

“I wanted to skate like Elena Berezhnaya,” Kawaguchi said later. Never being half-hearted about what she wants to do, the then 16-year-old decided she needed to train with the same coach as Berezhnaya in order to achieve her goals and sent a fax to Moskvina. The prominent coach wasn’t too excited at first as her hands were already full, but Kawaguchi persisted. She participated in Moskvina’s training camps and kept asking for a partner.

Finally, Moskvina suggested Russian Alexander Markuntsov. They teamed up in March 1999 and competed for Japan. Exactly two years later, the young couple took the silver medal at Junior Worlds in Bulgaria. They continued at the senior level, but their results weren’t as good. In 2003, they split up and Markuntsov went on to perform at a skating show and Kawaguchi followed Moskvina to Russia.

There, they found found a new partner for her, American Josh Martin. In May of 2004, Martin was hit by a car while rollerblading to a training session in St. Petersburg, suffering cuts to the legs and a broken elbow. He later decided to return home to the U.S.

Kawaguchi’s next partner, Devin Patrick, was an American as well.

“He taught me the quad throw (Salchow),” Kawaguchi explained. “He did really good throws, but some of the other elements didn’t work as well.”

The team competed at the 2006 U.S. National Figure Skating Championships where they finished 15th, and split up shortly afterwards.

“Life in Russia was hard for Devin,” recalled Kawaguchi. “He wanted to live in the U.S., but I didn’t want to leave Tamara Nikolaevna (Moskvina). I just couldn’t give up my studies, leave my coach, and go to America.”

So Kawaguchi stayed in St. Petersburg, and once again, began looking for a new partner. Thoughts that her skating career was over were constantly in her head.

“When it didn’t work out with Devin, I thought that continuing didn’t make sense,” the 25-year-old explained. “However, I had to finish my studies at the university (in St. Petersburg), and I couldn’t just go home. How could I have stopped skating and studying? I would have returned home (to Japan) with empty hands. If it doesn’t work out with my skating career, I had to at least finish my studies.”

The pair skating coaches in St. Petersburg then suggested that Kawaguchi should try out with Smirnov. He had just split up with partner Ekaterina Vassileva after finishing 6th at Junior Worlds in March 2006.

“The try-out didn’t feel special,” Kawaguchi admitted. “Until then, I always thought that I needed a partner with a certain height, a certain character, and certain abilities. Tamara Nikolaevna works at a very high level and has high demands. But then I didn’t have much of a choice after Devin. So I told myself that I can skate with anybody and I didn’t really judge Sasha (Smirnov) and his skating.”

Smirnov was also skeptical at first. “I had mixed feelings,” the 23-year-old confessed. “We were able to do some difficult elements right away, like triples, but we felt really uncomfortable with some of the other elements. My biggest concern was that the girl wasn’t Russian.”

Although Kawaguchi speaks fluent Russian by now and successfully finished her studies in “International Relationships” this summer in St. Petersburg, there is still a cultural barrier. “The mentality is different,” Smirnov acknowledged. “She is very modest and secretive. She doesn’t just come and give you the news. Even when she passed her exams successfully, she didn’t come and tell me about it. Maybe it’s just modesty, but maybe this is the mentality of Japanese girls.”

Kawaguchi on the other hand, feels the language barrier. “I am not such a quiet person. Sasha thinks that I am, but that’s not true. I just can’t talk the way I’d like to!” Kawaguchi pointed out. “Sasha is joking a lot and I don’t understand all of these jokes.”

Nevertheless, they get along well and support each other, but they are not a couple off the ice.

The ambitious team wants to include the quad throw Salchow in their free program, and Kawaguchi is not afraid at all of this high risk element – despite taking a lot of falls in practice. Smirnov is impressed by her working ethics.

“I don’t want to say anything bad about my previous partners, but in comparison to her, they were much weaker,” stated Smirnov. “Usually you have to push our Russian girls in practice, but here it’s the opposite. Sometimes I am tired and she is pushing me,” he laughed.

For both, studying plays an important role. After finishing her studies with the university this June, Kawaguchi is now thinking of studying another language. Smirnov finished his studies of “municipality management” in November 2006 and started to study at a sports university this year.

“Actually I am not so fond of studying and I prefer physical work to intellectual work,” admitted Smirnov. “But if I want to continue working in the sphere of figure skating and if I want to be able to work at a higher position, which is possible thanks to my first diploma, I’ll need to have an education in sport theory as well.”

Kawaguchi and Smirnov are one of the hopes of the Russian Skating Federation. Russian skating is far from previous success and glory since the stars of the 2006 Olympic Winter Games retired. For the first time in decades, Russia didn’t win a single medal at the 2006 World Championships.

Pair skating, which was once the stronghold of Russians, is in disarray. Currently there are only two competitive senior pair teams left – Kawaguchi and Smirnov and Mukhortova and Trankov. The other teams have retired, split up, and/or are taking a break or are not eligible to represent Russia in international competition.

Currently, the Japanese-Russian duo is not eligible to compete at the Olympic Winter Games as Kawaguchi would first need to obtain Russian citizenship. It will be a tough decision to make for the athlete as she has to renounce her Japanese citizenship. Japan does not tolerate double citizenship.

“Before, I didn’t think so much about Olympic Games. It was enough for me to be able to compete at Worlds,” Kawaguchi said. “If Sasha and I are having good results maybe I’ll do it. The Olympics is something you get to participate in once or twice in your life. The Japanese authorities told me that I can reapply for Japanese citizenship after giving it up, but only after ten years. The laws are very strict. If I have Russian citizenship, I’ll need a visa in order to travel home. My parents will have to send me an invitation.”

Understandably, Kawaguchi doesn’t like this prospect. On the other hand however, she has already gone far to pursue her dream of becoming a great pair skater. Time will only tell.