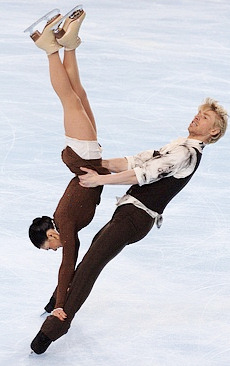 France's Isabelle Delobel and Olivier Schoenfelder perform to music from The Piano soundtrack.

Isabelle Delobel and Olivier Schoenfelder of France were the winners in the Ice Dance event despite placing second in the Free Dance (FD). Russia’s Jana Khokhlova and Sergei Novitski captured the silver, while USA’s Meryl Davis and Charlie White took the bronze.

Khokhlova and Novitski pulled out all stops in their expressive program to A Night on the Bald Mountain, with Khokhlova portraying a witch and Novitski a demon. Though their routine was filled with impressive lifts and complex connecting moves, the Russian silver medalists lacked what many believe to be an essential part of ice dance: traditional dance holds and positions.

“Our costumes were a collective idea of us, our coaches, choreographer and costume designer,” explained Khokhlova. “To reflect the theme, we chose dark colors. His (Novitski) costume also contains red to symbolize fire. My costume was designed to be more revealing.”

The couple got a costume deduction as Novitski wore tights, which is not allowed.

Despite some criticism on this aspect, they continued to capitalize on what they believe to be their best asset: extremely difficult acrobatic lifts. Nevertheless, the couple received a level four on all their elements except for the non-touching midline step sequence, earning a new personal best of 97.97 (52.80/46.17) points to win the FD. With a total score of 191.01 points, however, the maintained second place overall.

“We are very pleased with our performance and with our marks. We showed everything we can do,” said Khokhlova said.

Delobel and Schoenfelder wove an intricate spell over the audience as they retold the story of The Piano, but the French champions only received a level three for their dance spin and reverse rotation lift. Though they were awarded a level four on their two step sequences, Schoenfelder stepped out of a twizzle and that sequence was downgraded to a level one.

“We are disappointed with our performance today,” said Schoenfelder. “It wasn’t perfect technically. I missed a twizzle and the program lacked flow.”

“This is our very first victory in the Grand Prix, and we’ve waited a long time for it,” Schoenfelder said.

Davis and White maintained third place overall (176.21 points) after a flawless performance to Eleanor Rigby’s Dream. The students of Igor Spilband and Marina Zueva received a level three for their curve lift and non-touching midline step sequence, but received a positive grade of execution on all their elements, scoring 89.22 (49.40/40.82) points and winning their first senior Grand Prix medal.

Their smooth and dramatic program was quite a departure from the upbeat Kalinka they performed yesterday, but the U.S. bronze medalists nicely carried their theme throughout, telling the story of a lonely Davis inventing a shadow companion for herself and being happy about finally not being alone.

“We are excited about our first Grand Prix medal,” said Davis. “This is something we have been looking forward to. We can skate our Free Dance much better, but we’re happy for now.”

Italians Anna Cappellini and Luca Lanotte finished fourth in the free dance and overall (168.75 points) after an excellent performance to La Traviata. The 2007 Skate Canada silver medalists received a level 4 for all elements except for their non-touching midline step sequence, scoring a new personal best of 87.78 (48.50/40.28) points. Their dance was highlighted by an excellent expression of character by both partners, as well as elegant lifts which suited the style of the music perfectly.

Pernelle Carron and Mathieu Jost of France recovered some ground they lost due to the mistakes in the original dance, finishing fifth in the FD (81.71 points) and overall (159.26 points). The 2007 Skate Canada bronze medalists received a level three for the second part of their combination lift and circular step sequence, and only a level two for the non-touching midline step sequence. Despite those technical flaws, the French bronze medalists otherwise captivated their home crowd with their lifts which they created in collaboration with their former training mates Marie-France Dubreuil and Patrice Lauzon.

Armenians Anastasia Grebenkina and Vazgen Azrojan, who were fifth coming into the free dance, slipped to the sixth place overall (156.18 points) after placing seventh in the FD.

Kaitlyn Weaver and Andrew Poje of Canada placed sixth in the FD and finished seventh overall.

Delobel and Schoenfelder earned 15 points at this event and compete next at NHK alongside Khokhlova and Novitski, who picked up 13 points.

Cappellini and Lanotte now have a total of 22 points which includes the 13 they earned at Skate Canada.

Davis and White added 11 points to the nine they earned at Skate America for a total of 20 points.