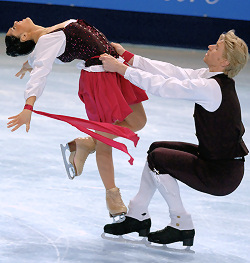 France's Isabelle Delobel and Olivier Schoenfelder strengthen their lead after placing first in the Original Dance.

In the final event of the day, the ice dancers took to the ice for the second time for the Original Dance (OD).

Delobel and Schoenfelder strengthened their lead (99.61 points) as they won the OD with 60.10 (30.40/29.70) points. The French couple, mostly known for their intricate free dances, opted to do a more sophisticated folk dance compared to their competitors, who chose outgoing and upbeat pieces. While the Breton fold dance performed by Delobel and Schoenfelder is substantially more exuberant than the programs they usually perform, it seemed tamed in comparison to the other dances performed tonight.

“It has been a long day,” said Schoenfelder. “We skated a great Compulsory Dance and felt good on the ice – even though the ice quality wasn’t so good. Especially for the last couples.”

The main attraction of the dance were the intricate changes of holds and positions which were very efficiently used to express the character of the dance. The French champions, however, only received a level three on their dance spin and circular step sequence.

“It was not the best performance that we can do on this OD,” admitted Schoenfelder, “but we completed all our elements without any big mistakes.”

Khokhlova and Novitski remained in second place overall (93.04 points) after earning another personal best of 58.15 (30.60/27.55) points for the debut of their gypsy dance to the Two Guitars. The Russians performed the dance with their usual abandon and excellent expression, but the program fell a bit flat on the audience and it failed to gained momentum as the dance progressed. However, the team improved the attention to the technical elements since last season, and the only element in their dance which received level three was an opening combination spin.

“We are happy with everything even with the fact that we skated both Compulsory and Original Dances in one day,” said Novitski. “It didn’t bother us as the competition schedule was convenient for us.”

Davis and White rose from fourth to third overall (86.99 points) after placing third in the OD with 55.25 (30.70/24.55) points. The U.S. bronze medalists received a level four on all their elements and earned the highest technical score of the night. Their Russian folk dance to Kalinka impressed the French audience with its upbeat character and nicely stylized moves.

“Today was a long day,” said White, “but it felt good. It (the schedule) is kind of an interesting way to do it, but I think for us anyway it went really well. We didn’t feel [any] effects from competing twice in a day. Coming in, we trained really hard and I think that paid off. We had energy for both programs and it felt like we pushed them out.”

Performing to their native Armenian folk music, Grebenkina and Azrojan displayed nice flow and character, and stayed within their comfort zone without forcing elements beyond their level. The team was awarded a level four for their lifts, dance spin, and twizzles. Despite a deduction for an extended lift, the 2007 Ondrej Nepela Memorial bronze medalists placed fourth with a new personal best of 49.86 points, and are currently fifth overall (77.80 points).

Cappellini and Lanotte slipped from the third to the fourth place overall (80.97 points) after placing fifth 49.11 (26.28/23.83) points in the OD. Cappellini’s blade slipped off her partner boot during the straightline lift, which was given a level one and and negative GOEs. Though the momentum building up to that point was lost, the Italians continued to express the character of their Serbian dance perfectly.

Carron and Jost dropped from fifth to sixth place overall (77.55 points) after making numerous mistakes in their Quebec folk dance. The 2007 Skate Canada bronze medalists had problems during their twizzles, stumbled during the circular step sequence, and came dangerously close to loosing their grip during the final rotation lift. The program was otherwise entertaining and warmly received by the French audience.