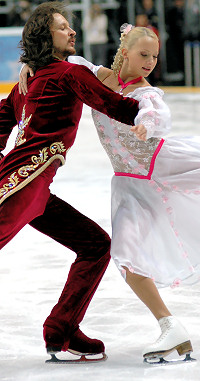 Oksana Domnina and Maxim Shabalin of Russia perform to Waltz from Masquerade by Aram Khachaturian.

Russia’s Oksana Domnina and Maxim Shabalin easily maintained first throughout the event to win the gold, distancing themselves by over 21 points from the rest of the pack (205.24 points total).

Nathalie Pechalat and Fabian Bourzat of France took the silver (184.38 points), while Ukrainians Anna Zadorozhniuk and Sergei Verbillo edged out Russia’s Ekaterina Bobrova and Dmitri Soloviev to win the bronze by a mere 0.13 points.

Domnina and Shabalin delivered a powerful Free Dance (FD) to Waltz from Masquerade by Aram Khachaturian, which tells the story of an arranged and unequal marriage between an elderly man and a young woman.

The theme was highlighted by Domnina constantly trying to “run away” from her partner in the first part of the dance, while “turning away” from him throughout.

The 2007 European silver medalists showed excellent dancing skills, smoothly moving through the changes of holds, but after the mistake on the spin at Cup of China, they were a bit tentative in their approach to this element which this time, received a level four with +0.90 GOE.

Their routine was also highlighted by matching twizzles and five level four lifts, and the Russian champions earned a new personal best of 101.99 (52.30/49.69) points for a first place finish in the FD.

“We were determined to give the very best technically,” said Domnina, “and we are pleased that we were able to pull ourselves together after the Cup of China.

The French silver medalists told an elaborate story a woman slowly descending into madness, going through all the stages of manic depression, including the drastic changes of mood. The team from Lyon managed to avoid major mistakes, which has been a real problem for them in the past, but Bourzat was a bit unsteady in one of the lifts and the team only earned level two for their step sequences.

Nonetheless, the originality of their dance made a strong impression on the Russian public, and they placed second overall with a total score of 184.38 points.

“We skated very well, but we didn’t get the levels we had hoped for in some of our elements,” said Bourzat. “So we’ll still have work to do, but we’re very happy to have achieved a new personal best in each stage of the competition and to have qualified for the Grand Prix Final.”

Katherine Copely and Deividas Stagniunas of Lithuania, who stood in sixth after the Original Dance (OD), placed third in the FD with a personal best of 82.82 (46.80/36.05) points. However, with a total score of 161.36 points, the team only moved up one spot to fifth overall.

The 2007 Golden Spin bronze medalists produced a clean but conservative skate to Beethoven’s Last Night by the Transsiberian Orchestra, receiving levels three and four on all their elements. However, the amount of connecting elements in their program didn’t measure up to the leading teams.

Zadorozhniuk and Verbillo produced a powerful and dramatic dance to Nostradamus by Maksim Mrvica, placing fourth in the FD with a personal best of 81.60 (45.70/35.90) points. With a total score of 161.64 points, the Ukrainians placed third overall (161.64 points).

Their dance was done in the classical tradition of the powerful and dramatic free dances, and featured five complex level four lifts.

“It’s hard to say what I’m feeling now,” confessed Verbillo, “but to have won our first Grand Prix medal is a major step for us. I can’t stay that I didn’t think the possibility to medal was in my mind. We achieved a lot.”

Armenians Anastasia Grebenkina and Vazgen Azrojan skated a fairly clean routine to music from The Godfather soundtrack, placing fifth in the FD with 81.35 points. With a total score of 160.72 points, the 2007 Ondrej Nepela Memorial bronze medalists finished sixth overall.

Bobrova and Soloviev slipped to fourth place overall (161.51 points) after placing sixth in the FD (78.85 points).

Bobrova fell during the require twizzle sequence and their complex program to music by J.S. Bach appeared to be too difficult for the 2007 Russian junior champions at the moment.

Pechalat and Bourzat pocketed another 13 points in Moscow, for a total of 26 and will join the Russians at the GPF.

Zadorozhniuk and Verbillo earned 11 for a total of 16 points.

The sixth and final Grand Prix event before the GPF is the NHK Trophy, which will take place Nov 29 – Dec 2 in Sendai, Japan.