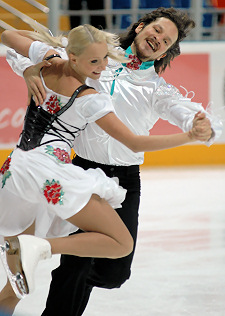 Russia's Oksana Domnina of Maxim Shabalin earned a new personal best with their Yankee Polka in the Compulsory Dance.

The fifth event of the 2007-08 ISU Grand Prix Series continued with the Cup of Russia which is being held in Moscow, Russia at the Khodynka Ice Palace.

Approximately 60 skaters from 19 different countries are competing for points and global prize monies totaling $180,000 in U.S. dollars. The points will go toward qualification for the Grand Prix Final in which the top six competitors from each discipline will be invited to compete for a total purse of $272,000 U.S. dollars.

The competition kicked off on Nov. 23 with the Compulsory Dance.

The Russian champions’ performance in the compulsory round of the competition reasserted one very simple fact: whatever questionable choices they might have made in costumes or music, Domnina and Shabalin are one of the worlds finest ice dancers.

Their performance was everything the ISU handbook on ice dance required: it was bouncy without being sloppy, and the skaters remained close together throughout the dance, executing all steps and turns in excellent unison.

“The Polka is a fun dance,” said Domnina, “but we skated as the tenth couple without an ice resurfacing, and it felt like [we were] on railway tracks.”

“There are tracings from the other couples,” she continued, “and this is dangerous. When we went out, I felt like I got caught everywhere. I think it would be better if there was still a draw for (the skating order of) the compulsory dance.”

Pechalat and Bourzat were very strong technically as well, but their execution of the dance lacked the nonchalance exhibited by the Russians. Nonetheless, they scored a new personal best, improving upon the record they set just a few weeks ago at Skate America.

The French felt they put out a clean dance with strong rhythm and good expression.

“We did it even better this morning in practice,” said Bourzat, “but this is competition and we are happy with what we did. We got a new personal best, but I think we still can improve our personal best in the next competition if we continue to skate well.”

Bourzat also added that they liked the Waltz better than the Yankee Polka. “It suits our style better,” he said, “but generally we don’t have favorite compulsory dances.”

Currently in third are Russia’s Ekaterina Bobrova and Dmitri Soloviev of Russia with 30.22 (15.60/14.62) points. The students of Svetlana Alexeeva showed a marked improvement over their performance from three weeks ago at Skate Canada where two stumbles forced them to settle for the sixth place in the CD. In Moscow, however, the 2007 World Junior Champions were smooth and appropriately exuberant.

The team felt the support from their friends and the home crowd in general, and felt they improved on the Polka since Skate Canada.

“We were not nervous,” claimed Soloviev. “A little nervousness is always there, but it was minimal. It (the Polka) was much better without any stumbles.”

The Russians also feel at home as seniors.

“We learned how to approach the competition,” explained Soloviev. “It’s very different (from junior events) when you go out on the same warm-up with couples like Domnina and Shabalin and Pechalat and Bourzat. You feel the responsibility, especially when you skate at home in your country.”

Anastasia Grebenkina and Vazgen Azrojan of Armenia are fourth with 30.04 (15.88/14.16) points. They scored more than Bobrova and Soloviev in technique, highlighting the importance of experience for mastering the compulsory dance patterns, however, their expression was lacking.

Anna Zadorozhniuk and Sergei Verbillo of the Ukraine are currently fifth, followed by Lithuania’s Katherine Copely and Deividas Stagniunas.