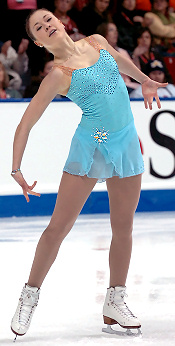 Finland's Laura Lepistö (19) placed first after the short program in her senior debut on the Grand Prix circuit.

Finland’s Laura Lepistö, who missed half of last season due to injury, made her senior debut on the Grand Prix circuit.

And it was a good one.

The Finnish silver medalist placed first after the short with a new personal best of 59.18 points.

Lepistö displayed great edge quality and flow in her routine to music from The Legend of 1900 soundtrack, landing an easy triple toeloop-triple toeloop combination, a triple loop, and a flying sit spin with good good air position.

There appeared to be a calmness to her skating, though not timid. The Nordics 2007 silver medalist also produced a double Axel and two good level four spins.

The stunned Finn felt it was the best short program she’s ever done.

“It was almost perfect and the best I could do,” said Lepistö. “My jumps went well, but also my other elements such as my spins and spirals. I didn’t expect this.”

Emily Hughes of the U.S. showed power in her routine from the start, landing a nice triple flip out of footwork in her Gershwin routine to I Got Rhythm.

The 2007 Four Continents silver medalist also delivered a good triple Lutz-double toeloop combination and a double Axel before displaying good extensions on her spiral sequence. The American ended her routine with a very good level four layback and combination spin, earning a new personal best of 58.72 points for a second place finish.

Japan’s Mao Asada, who had problems with some jumps, placed third with 58.08 points.

The Japanese champion, who seems to have grown a fair bit taller since last year, underrotated and fell out of the landing of the second jump of of her triple flip-triple loop combination. She was also penalized on her triple Lutz for taking off from the inside edge, but landed a good double Axel.

Teammate Yukari Nakano is currently in fourth place with 55.94 points. The 22-year-old fell on a triple Lutz, but otherwise landed a triple flip-double toeloop and a double Axel.

Canada’s Joannie Rochette is in a close fifth with 55.48 points. The 2007 Four Continents bronze medalist produced a good double Axel, but two-footed the landing on her triple Lutz and had a shaky landing on a triple flip-double toeloop combination.