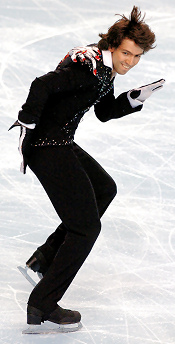 Alban Preaubert of France lead the men's field after his Short Program to music from the Addams Family soundtrack.

The Frenchman performed his entertaining program to music from the Addams Family soundtrack with a lot of style and character, landing a triple flip-triple toeloop combination, a triple Axel, a triple loop, and gaining a level three on most of his spins.

“I did a good short program at Skate America three weeks ago,” said Preaubert, “[but] it wasn’t as good as here. I have worked hard on my component scores – on my spins and on my steps. I wanted to skate cleaner than at Skate America.”

When asked about feeling any pressure due to the withdrawal of his teammate Brian Joubert, the 22-year-old responded: “I was very sad that Brian didn’t come, because he is my friend. We finished first and second here last year and we wanted to repeat this result. But his withdrawal didn’t change anything for me. I just planned to come into Trophée Bompard  relaxed. I wanted to have fun and I am glad that I was confident on the ice. For sure, with Brian not being here, the French people expect more from me, but I tried not to think about it.”

Chan’s only mistake came when he singled a triple Lutz, but the 2007 Skate America silver medalist otherwise landed a beautiful triple Axel and triple flip-triple toeloop combination. The Canadian was also awarded high levels on his spins and footwork, but what really set him apart from all other competitors, was his intricate choreography and how he incorporated all the moves in the program into one seamless pattern.

“Today’s performance was pretty good,” said Chan. “I really liked the marks, of course. I realize now that the components are getting better in my skating. [As for] the technical part of the program, I wish it was a bit better. I did what I did. I did the flip-toe (triple-triple), which I doubled the toe at Skate America, but I popped the Lutz here.”

Belgium’s Kevin van der Perren is currently third after doubling an intended triple Axel. The 2007 Skate Canada silver medalist otherwise gained a level four on all of his spins and received the second highest technical score of the night. Despite earning a new personal best of 70.60 (38.10/32.50) points, the 2007 Skate Canada silver medalist was visibly disappointed by his performance.

“It was not my best technically,” admitted van der Perren. “I am really happy though that I got the high levels in my spins.”

Russia’s Sergei Voronov, who was forced to withdraw from Skate Canada due to injury, skated a clean but conservative program. The current Junior World bronze medalist opted to do only a triple toeloop-triple toeloop as a combination jump, but combined with an excellent triple Axel and somewhat tightly landed triple loop, his performance to Rachmaninov’s Piano Concerto No. 2 earned him 68.70 (37.10/31.60) points.

Japan’s Kensuke Nakaniwa faltered on the landing of all of his jumps in his Sarabande routine, but he gained level four on two of his spins and is currently in the fifth place with 62.70 (35.30/27.40) points.

Christopher Mabee of Canada delivered a powerful performance to Khachaturian’s Adagio of Spartacus and Phrygia, but he received a negative grade of execution on both of his triple Axels and solo triple Loop. The Canadian silver medalist is currently in sixth place with 61.68 (31.78/29.90) points.

Only two skaters (both from the U.S.) attempted a quad jump in their short program, however, neither of them were successful.

The technical panel ratified Ryan Bradley’s attempt, but he received a -3 Grade of Execution (GoE) across the board because he turned his planned combination jump (quadruple toeloop-triple toeloop) into a solo quadruple toeloop.

Tomas Verner of the Czech Republic was considered to be one of the favorites, but he underrotated his second jump in a triple flip-triple toeloop combination, singled a triple loop, and only received a level one on two of his spins. As a result he is currently in eighth place with 57.23 (25.28/32.95) points.