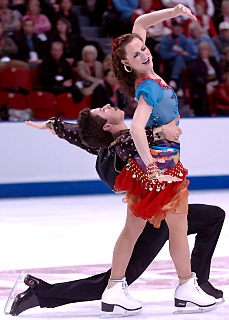 Canadians Tessa Virtue and Scott Moir maintained their overnight lead after their routine to Dark Eyes.

Overnight leaders Tessa Virtue and Scott Moir maintained their lead after earning a new personal best of 61.20 in the OD.

Their routine to Dark Eyes, which received no negative GoEs, was highlighted by their level four lifts and and matching level three twizzles. The two-time and current Four Continents bronze medalists also produced a level four circular step sequence and combination dance spin.

The Canadians, who are currently in first with 97.45 points, were excited about their performance.

“It was a lot of fun to skate in front of a very excitable crowd,” said Moir. “We really just enjoyed the experience and we’re hoping to build on it for tomorrow.”

Italy’s Anna Cappellini and Luca Lanotte remain in second place overall (86.13 points) after placing second in the OD with 53.90 points.

Performing an exuberant Serbian folk dance to music by Goran Bregovic, the Italian silver medalists delivered two difficult lifts and a very good circular step sequence. The only mistake noted was an out-of-sync twizzle of a level four midline twizzle sequence, however, the 2007 Winter Universiade champions captured the flavor of the music very well.

The French bronze medalists also produced a very lively circular step sequence and level four twizzles, earning a new personal best of 52.43 to place third in the OD. With a total score of 80.79, the 2007 Winter Universiade bronze medalists moved up to third place overall, edging out USA’s Melissa Gregory and Denis Petukhov just under a point.

Gregory and Petukhov performed an Irish jig to music from Lord of the Dance which was highlighted by level four midline twizzle sequence and two difficult lifts. The U.S. silver medalists earned 47.80 points for a fifth place finish in the OD, and are currently in fourth overall with 79.83 points.