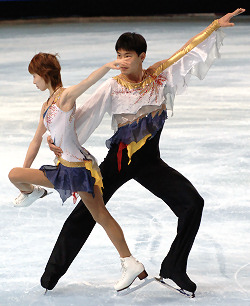 Dan Zhang and Hao Zhang of China comfortably lead the field in the Pairs Short Program after their "Piano Fantasy" routine.

Dan Zhang and Hao Zhang of China comfortably lead the field in the Pairs event with 71.60 (42.64/28.96) points after delivering a nearly flawless routine.

Skating to “Piano Fantasy,” the 2006 Olympic silver medalist opened with an awesome triple twist which earned them 7.26 right from the beginning. The team proceeded to land an equally impressive throw triple loop and side-by-side triple salchows. They received high levels on their non-jumping elements and the judges were unanimous in their decision to reward the skaters with the positive grades of executions.

“We performed quite well,” said Dan Zhang, “although there are still areas we could improve. For example our spins and the jumps.”

Teammates Qing Pang and Jian Tong are currently in the second place. The 2007 World silver medalists had a poor start to the season after they placed a distant second to Canada’s Jessica Dube and Bryce Davison at Skate America, but today they demonstrated the qualities which allowed them to become World Champions in 2006.

The Chinese champions were not flawless, however. They received slightly negative GOEs on their side-by-side triple toeloops, throw triple loop, and their pair combination spin. However, their performance was a major improvement over the one at Skate America and the overall complexity of their routine to O Doux Printemps d’ Autrefois allowed them to earn 64.32 (35.92/28.40) points.

“This is our third competition after Skate America and the Cup of China,” explained Tong, “so we feel a bit tired. Last year we did only one Grand Prix due to health problems, and this year we did three. But it is a good practice for us.”

Russia’s Maria Mukhortova and Maxim Trankov are in a close third with a new personal best of 61.76 (35.84/25.92) points after their routine to Otonal by Raul di Blasio.

Coming off an extremely difficult season filled with coach changes and injuries, the Russian champions showed marked improvement under the guidance of Oleg Vasiliev, a former coach of Tatiana Totmianina and Maxim Marinin. The couple expanded their technical repertoire by including a triple twist, but the execution of this element wasn’t perfect as Trankov failed to catch Mukhortova by her waist prior to putting her on the ice. All other elements were executed smoothly, including their side-by-side triple toeloops, a level four lift, and a throw triple Salchow which they placed at the very end of their program.

“This was not bad,” said Trankov, “but it can be better. Tomorrow there will be a big fight in the free skating as the couples ranked third, fourth and fifth all have a good chance to make the podium.”

USA’s Tiffany Vise and David Trent are currently in the fourth place with a new personal best of 56.06 (32.94/23.12) points. They executed a strong throw triple loop, but made a slight mistake on the landing of their side-by-side triple toeloops.

Tatiana Volosozhar and Stanislav Morozov of the Ukraine, who showed great results at the European and World Championships last year, are currently in a disappointing fifth place (54.18 points). Morozov fell on his jump in the side-by-side triple toeloops, Volosozhar touched the ice with her hand on a throw triple loop, and the pair botched their final combination spin.