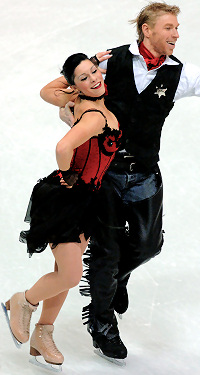 The 2008 European Figure Skating Championships are being held Jan. 22-26 in Zagreb, Croatia at the Dom Sportova. It is the third time since 1974 that the city has hosted this event. Approximately 158 skaters from 34 different countries are competing in Zagreb.

By competing at Europeans, the athletes will also earn points toward the World Standings for the 2007-08 season. Seasonal best scores will not be taken into consideration (in terms of World Standings) as they only apply to Grand Prix competitions.

Following a decision of the 51st Ordinary Congress of the ISU in June 2006, no Qualifying Rounds will be held. All skaters/couples will compete in the Short Program, and the top 24 will proceed to the Free Skating.

The competition kicked off on Jan. 22 with the Compulsory Dance and Pairs Short Program.

The defending European Champions, Isabelle Delobel and Olivier Schoenfelder of France, currently leads the field with 41.25 (21.01/20.24) points – exactly one point ahead of their main rivals. The team from Lyon has decided that the Yankee Polka character is best expressed in the style of “Wild West Saloon,” but otherwise their dance was spot on. They had excellent flow with deep, solid edges, and were powerful and confident throughout their performance.

“We felt very good on the ice” said Delobel. “We wanted to create a “saloon atmosphere,” and the French audience (in Zagreb) has reacted well to that, which is great for us. The ice was also better than the other days.”

Her partner Schoenfelder agreed, adding, “We wanted to catch this spirit, with her as a bar dancer and me as the sheriff. This made it easier for us to work on this dance as it’s not so much fun to do for us otherwise.”

However, the French acknowledged that the competition is far from over.

“But it was a very good start for us today,” continued Delobel.

The 2007-08 Grand Prix Final Champions, Oksana Domnina and Maxim Shabalin of Russia, delivered a strong and expressive dance and are currently second with 40.25 (20.19/20.06) points. Despite Shabalin undergoing meniscus surgery on December 24th, the team did not seem to be affected by the loss of training time.

“Everything is fine,” conceded Shabalin. “It never hurts, it’s not hurting and it won’t hurt. I went back on to the ice ten days after the operation.”

The team skated in the first warm-up group, well before their main rivals, but according to Domnina, the starting order didn’t matter for them.

“There was a draw and that is unpredictable,” said Domnina. “But now we are done and can sit down calmly and watch the others. I think we skated well, but not the best we can do. It makes us happy to get a seasonal best for it.”

The 2008 Russian Champions, Jana Khokhlova and Sergei Novitski, are currently third after an upbeat and engaging performance which earned them 37.37 (18.76/18.61) points. The team has improved a lot since the National Championships in early January when the dance was obviously a new one for them.

“We dedicated a lot of time to the Polka,” admitted Novitski. “We basically skated it at each morning practice for two hours. We put a lot of effort into it and it seems like something came out [of it it] and we didn’t work in vain. Many feel this dance suits us well as it’s fast and happy, but we just didn’t have time to work on it during the Grand Prix season.”

Federica Faiella and Massimo Scali of Italy are currently fourth with 36.87 (18.55/18.32) points). The Italian Champions were accurate in the execution of their steps, but their overall impression was somewhat shaky and lacked the precision of the teams placed before them.

“We felt confident on the ice,” Scali later told the press. “We skated very well and we’re happy with the marks too.”

The Italians ultimate goal is to medal at this event.

“We’re glad to be more than two points ahead of the second French team (Pechalat and Bourzat),” added Scali. “We lost to them at Skate America. It’s an improvement for us from the beginning of the season. Since Nationals, we worked a lot on this dance with Anjelika Krylova, and she should be proud of us. This could be a hard Europeans for us, because we don’t have a judge here.”

The 2007 Grand Prix finalists, Nathalie Pechalat and Fabian Bourzat of France, finished fifth with 34.58 (17.45/17.13) points – achieving their stated goal of reaching the Top 5. They expressed the character of the dance well, but some steps were not secure enough. Like Domnina and Shabalin, the French team was also sidelined with surgery (Bourzat underwent meniscus surgery after the Grand Prix Final), but they claimed that it didn’t affect their performance at all.

“It was a good performance and we’re happy about it,” Bourzat. “The surgery was right after the Grand Prix Final and it was successful. I’m not in pain any more. We feel ready to compete”.

The performance by Sinead and John Kerr of Great Britain was highlighted by an excellent unison between the siblings in some places, but overall they were not as expressive as the couples who finished ahead of them. The team, who appeared somewhat nervous during the dance, placed sixth 33.55 points.

“We actually did this dance at our National Championship last week for the first time this season,” admitted John. “This was done to give us some practice. I think it felt pretty comfortable tonight. We would have liked a little bit more (higher scores), obviously. There are two more parts to go, and we just have to keep fighting and hope that we can pull up a few spots. If we can keep the top five from last year that would be great.”

Alexandra Zaretski and Roman Zaretski are currently in a close seventh with 33.12 points.