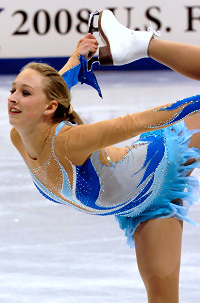 Alexe Gilles (16) of the Broadmoor Skating Club, performs to Oceanic by Vangelis for the Ladies Long Program.

The junior ladies took to center ice as the marquee event in this day at the 2008 U.S. Figure Skating Championships in Saint Paul, Minn. It was a competition that started with ten falls by the first three skaters, but ended in a fight for the right to stand on the podium by five young ladies who all gave inspired performances.

Coming out on top was 16-year-old Alexe Gilles (Broadmoor SC) who overcame a two point deficit after the short program to capture the gold medal. Skating to Vangelis’ Oceanic, the Junior Grand Prix finalist opened with a huge triple Lutz-double toe combination that matched the top skaters in the world in height and distance, and followed that with an airy double Axel.

“I opened with a triple Lutz-double toe with nice speed,” Gilles later gushed. “Everything was just nice and easy.”

After doubling her attempt at a triple flip, Gilles skated a flawless program in which she landed another triple Lutz and three other triples to easily outscore her competition with a total of 103.54 points. Gilles’ competition total of 156.17 points is the highest total recorded at the U.S. Championships in the junior ladies event, and was six points better than her closest competitor.

Dressed in an aqua and white flowing dress, Gilles smiled from start to finish in her program, and was still smiling at the press conference over an hour later.

“Landing the second Lutz in the second half of the program felt really good,” said Gilles. “I tried to hold my focus for the rest of the program. I just tried to stay in the present, so I just kept going from there.”

“My brother was a really good junior,” said a wide-eyed Gilles. “It feels really good to be a champion as well. My sister is really trying to do it herself.”

The leader after the short program, 15-year-old Angela Maxwell (Dallas FSC) powered through her program set to music from the soundtrack of Finding Nemo to finish with the silver medal. Last year’s novice champion started out well with a clean double Axel, but then struggled with attempts at the triple flip and loop.

“It’s a great feeling to get second in junior,” said an elated Maxwell.

After taking time to regroup, Maxwell fought through her program and landed four triple jumps, including her triple toe-triple toe combination to finish with the second highest executed elements score of the evening.

“My levels were pretty good,” admitted Maxwell, “but I kind of had a few stumbles. But I recovered, so that was good.”

Winning the bronze medal with a snappy program to the skating standard Malaguena, was Brittney Rizo (SC of Boston). The 16-year-old opened with a light triple loop that earned her positive GOEs, but immediately doubled an intended triple flip.

“I did a double flip instead of a triple, but that was okay,” Rizo matter-of-factly. “I just really enjoyed being out there with everybody. It was just really awesome.”

Rizo completed four more triple jumps, including two in combination, and earned a level 4 on all of her spins to finish with a competition total of 149.60. Last year’s 12th place finisher in this event credits newfound confidence for her meteoric rise in the standings.

“I just wanted to have a good season,” explained Rizo. “[My coaches and I] wanted that every time I go out, to have a good skate. So we just kept training and training, and when I finally got here, I just felt so ready.”

Gilles, Maxwell, and Rizo all intend to compete as seniors next season.

Fifteen-year-old Kristine Musademba (Washington FSC) rebounded from a disappointing short program to win the pewter medal with an entertaining program to Duke Ellington’s Caravan. Musademba was credited with landing five triple jumps, including a flawed Lutz and a triple flip-double toe combination, that allowed her to edge out 14-year-old Amanda Dobbs (Peninsula SC).

Dobbs may have had the skate of her life in this competition, as she completed three easy triple jumps before making a mistake on her final attempt on a triple Salchow. Skating to the music of Spartacus, Dobbs commanded the ice with sure footedness and a finely tuned attention to detail in her choreographer. Dobbs’ spiral sequence was particularly stunning as it was timed perfectly to the crescendo in the music, and with positions that take years to learn in ballet class.

Dobbs finished second in the freeskate, but because she was so far behind after the short program, she was unable to unseat Musademba from the podium.