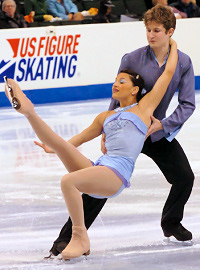 Chelsi Guillen (14) and Danny Curzon (20) perform to Samuel Barber's Adagio for Strings for their Short Program.

It was not a great day for pairs skating at the as the junior teams hit the ice for their short programs. In recent years, U.S. junior pairs were showing promise, but the difficulty level took a huge hit in this competition.

Pacific Coast Sectional Champions Chelsi Guillen and Danny Curzon (Coyotes SC of Arizona) looked to be the only team with a championship on their minds, and easily finished first in this weak field.

Skating to Samuel Barber’s Adagio for Strings, Guillen and Curzon used an error-free performance to catapult them into the lead with 53.65 points.

“This is such an imposing and haunting piece of music that sucks you in,” said Curzon. “We really wanted to go for a really mature and elegant look this season, so we picked this piece knowing that we would grow into it by the end of the season.”

The duo finished in eighth place in this competition last year, but is now in their second full season together as a team. Guillen (14) and Curzon (20) landed clean double Axels and executed level 4 spins that could rival some of the best in the world.

“Chelsi is a pretty good singles skater, and Danny has been skating pairs for nine years,” explained coach Doug Ladret.

But what really separated the team from the rest of the field, was their attention to interpreting the music. They shared it with each other, and in turn, invited the audience to watch.

“We really worked on our connection this year,” shared Guillen. “It was something that we really paid attention to and wanted to share with the audience.”

Finishing in second place with a less-difficult program, are last year’s bronze medalists Jessica Rose Paetsch (Broadmoor SC) and Jon Nuss (Broadmoor SC). The Junior Grand Prix finalists had a mistake on their most challenging element – the double Axels, and only managed a throw double toe loop to the leader’s triple of the same kind.

“We have been doing (the throw double toe) all season,” Nuss admitted. “This is our first year doing double Axels, so we wanted to focus our energy on committing to that element this season.”

However, this couple’s international experience showed on the component scores for which they were rewarded with the highest marks of the afternoon. In addition, the 2006 Novice pairs champions were rewarded with high levels on their split twist and overhead lift. In the end, Paetsch (14) and Nuss (20) earned a total of 52.13 points for their routine to Por Una Cabeza, and promise increased difficulty in the free skate.

“We have a triple twist and a carry lift in the free skate,” Paetsch declared. “And we are working on other stuff, but it just hasn’t gotten strong enough to put into the programs yet.”

Though they skated early, Tracy Tanovich and Michael Chau (Southwest Florida FSC) earned marks that kept them in medal position through the end of the competition. Skating appropriately to music from the soundtrack of Harry Potter and the Goblet of Fire, the duo opened with a nice level three split double twist.

Though she is just 11 years-old, Chau and her 17-year-old partner have podium experience as they won the novice title at last year’s U.S. Championships. However, they did not have the technical mastery of their elements, making a small mistake on their throw triple toe, as well as receiving a level 1 on their death spiral.

“I thought that we put in a good effort,” said Tanovich. “We had some little mess-ups here and there, but overall it was pretty good.”

“We are very pleased that we got our highest score so far this season,” Chau added. “I thought that we did really well, and we came in here wanting to put on a good show. We wanted to show that we could hold our own in a junior competition, and we did just that.”

“There are a lot harder tricks with triple twists and throws, and you need to skate faster to look like one of the big teams,” continued Chau. “But I think that we did a good job in fitting in today.”

Last year’s seventh place finishers, Lisa Moore (ISC of Ft. Collins) and Justin Gaumond (All Year FSC), placed fourth with a clean, but low-tech program. The team score 47.14 points with their Nights in White Satin program, and showed a sleek and romantic side to their skating that delighted the audience. However, in only attempting a throw double toe loop and side-by-side double loops, the team would have had difficulty in placing higher.

In fifth place, and still within reach of the podium, are Andrea Best and Trevor Young (Detroit SC) with a score of 47.04 points. The veteran team, who are no longer age-eligible to compete on the junior level internationally, fell on the double Axels and lost levels on their final two elements in their program