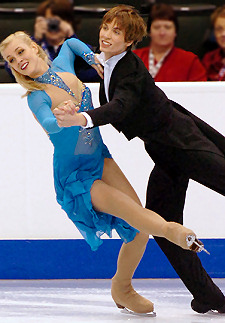 Madison Hubbell (16) and Keiffer Hubbell (19) perform the Viennese Waltz for the Compulsory Dance at the 2008 U.S. Figure Skating Championships.

The brother-sister team of Madison Hubbell and Keiffer Hubbell (Ann Arbor FSC) placed first in the CD with 34.61 points.

The team felt they did as well as they could have hoped.

“Since we train in an Olympic-sized rink at home, it’s always harder to fit our (compulsory) patterns into an NHL-sized rink,” explained Keiffer. “But we handled it more gracefully than in previous years.”