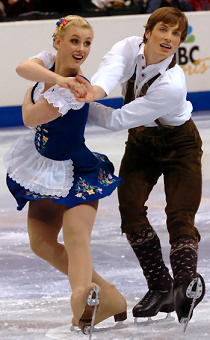 Madison Hubbell (16) and Keiffer Hubbell (19) lost crucial training time in the off-season due to an injury that Keiffer sustained in training.

The brother-and-sister team of Madison and Keiffer Hubbell (Ann Arbor FSC) stumbled their way to the top of the standings after the junior Original Dance (OD) on the strength of their Compulsory Dance (CD) score at the 2008 U.S. Figure Skating Championships in Saint Paul today. The team lost crucial training time in the off season due to an injury that Keiffer sustained in training, and it was evident in their German folk polka program. Still, last year’s silver medalists were able to hold on to their lead, earning a total of 85.27 points to this point in the competition, but had to settle for third in this phase of the competition.

The Hubbells started out with a bang, scoring well on an inventive level 4 straight-line lift and level 4 twizzles, but things quickly turned on the duo as they started to look clumsy and labored in the middle of their program. Their lack of training time was evident in the midline steps in which Keiffer fell, and the team incurred a mandatory one point deduction.

The performance of the day was executed by the young team of Madison Chock (All Year FSC) and Greg Zuerlein (Arctic FSC), who placed fifth in last year’s novice competition, but look like serious threats for the gold medal in this competition.

Skating to Dark Eyes (Russian folk), the Junior Grand Prix Finalist earned level 4 on every element that they competed, as well as positive Grades of Execution (GOE). Chock, 15, and Zuerlein, 19, showed a confident program highlighted with snappy choreography and a theatrical performance quality that separated them from the rest.

Chock and Zuerlein scored 53.03 points in the original dance for a competition total of 82.95 thus far.

Standing in third place is last year’s pewter medalists, Piper Gilles (Broadmoor SC) and Timothy McKernan (Broadmoor SC), with a total of 81.21 in the competition. Gilles (16) and McKernan (18) performed their Irish folk program with flair, but skated slower than the leaders and only placed fourth in this phase of the competition. The team only earned a level two for their serpentine steps, but capitalized on their program components to score 50.24 points in the OD.

In fourth place, after finishing second in the OD, is the other brother-and-sister of Maya Shibutani (SC of New York) and Alex Shibutani (Broadmoor SC). The tiny team skated a Japanese folk dance reminiscent of their heritage in which Maya effectively utilized an authentic fan to accentuate their choreography.

Maya (13) and Alex (16) won the gold medal on the novice level last season in Spokane, Wash., but found themselves in seventh place after yesterday’s CD. The duo skated with confidence that belied their young ages, and earned a partial standing ovation by the crowd. The team scored 52.32 points for their OD and have earned 79.98 points overall.

In fifth place is Pilar Bosley (Peninsula SC) and John Corona (Philadelphia SC & HS) with 78.42 points, and they are followed by Shannon Wingle (Arctic FSC) and Ryan Devereaux (Coyote SC of Arizona) with a total of 76.59 points.