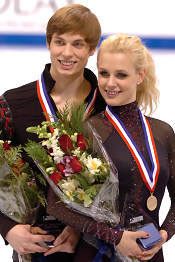 The brother-and-sister team of Madison and Keiffer Hubbell (Ann Arbor FSC) overcame a summer of injuries to take the Junior ice dance title at the 2008 U.S. Figure Skating Championships.

Not knowing if they would even be able to compete this entire season, the brother and sister team of Madison and Keiffer Hubbell (Ann Arbor FSC) overcame a summer of injuries to take the Junior ice dance title at the 2008 U.S. Figure Skating Championships in Saint Paul, Minn. on Thursday.

“I injured my right hip over the summer,” said Keiffer. “I injured a whole bunch of muscles in my hip, and then there was a ripple effect up my back that [in turn caused] some nerve issues. But recently we have started acupuncture, and that seems to be working.”

But the health issues did not stop there for last year’s silver medalists.

“I got food poisoning after the [Original Dance], and I had to go on IVs for dehydration,” said Madison’s older brother.

Skating to Heat by Apocolyptica, last year’s Junior Grand Prix Final champions opened with a mistake on their twizzle sequence, which were in synch at the start, when Keiffer added an extra one that wasn’t choreographed.

“The twizzles go by so quickly, explained Madison, “and to be able to count them is near impossible.”

“A little bit of anxiety probably caused me to do that,” Keiffer added. “We train our twizzles with the music, so if we rush them, it’s difficult to know how many we did.”

Madison, 16, and Keiffer, 19, recovered well, and gained momentum as the program went on, presenting a more mature style than last season. With each element, the team seemed to gain confidence, and attacked each element with technical competency. The highlight of the program was a new straightline lift in a back spiral position set perfectly to their music that earned the champions a level 4 and positive Grades of Execution (GOE).

“It is amazing to win the title,” said a very happy Madison. “Everything has to work exactly how you plan it for something like this to happen, and it’s hard to prepare to for that.”

The Hubbells won the free dance with a score of 82.21 points, and easily defeated their closest competitors overall with a total score of 167.48 points.

Last year’s pewter medalists, Piper Gilles (Broadmoor SC) and Timothy McKernan (Broadmoor SC) moved up two positions this season to claim the silver medal with an impressive technical performance that earned the team a level 4 on each of their elements.

Gilles, the older twin sister of junior ladies champion Alexe Gilles, was overcome with emotion after the performance, and the team dedicated their program to McKernan’s father.

“My father, Lt. Col. Tim McKernan, is in the U.S. Army,” explained McKernan. “He went over to Iraq in September, and will be there for fifteen months. He’s watching the competition on the internet.”

Gilles (16) and McKernan (17) placed pulled up from third place after the Original Dance, to second overall, narrowly edging out Madison Chock (All Year FSC) and Greg Zuerlein (Arctic FSC), who finished with the bronze medals. The silver medalists placed second in the free dance and scored a competition total of 161.66 points to Chock and Zuerlein’s 161.40.

After placing fifth in last year’s novice competition, Chock, 15, and Zuerlein, 19, made a splash on the international circuit this season by earning a spot in the Junior Grand Prix Final where they also finished fifth. The team felt like they skated well here, and were satisfied with the result.

“We had a few bobbles in the free dance here,” Zuerlein shared. “But once we got going, it went smoothly.”

Skating to cuts from West Side Story, the duo brought a bit of Broadway to the ice with an impassioned performance that told the story of young lovers facing immediate tragedy.

“I don’t have any theatrical training,” confessed Chock. “I really enjoy performing to the music. I’ve seen the movie many times. I think that I just relate to the characters and the love story well, so it is easy to perform.”

Chock and Zuerlein showed that they had the technical mettle as well, as the team also earned a level 4 on each of their program elements. In the end, they scored78.45 points in the free dance and 161.40 overall.

Finishing in fourth place and winning the pewter medals was another team of siblings, Maia Shibutani (SC of New York) and Alex Shibutani (Broadmoor SC).

“I think we achieved more than we hoped to here,” shared a surprised Alex. “Each year we take it as the next step, and it is a long road to get there. I’m just really happy with the way we skated.”

Last year’s novice champions will finally be age-eligible for junior international assignments next season after sitting out this fall due to Maia being just twenty days short of the cut-off date. Maia, now 13, and Alex, 16, are ready to start climbing the international ladder.

“We’re going to take a little rest,” stated Alex, “but then we’ll start preparing for next season.”

Maia added, “I’m thinking that we are staying juniors next season, and we are eager to start competing internationally.”

The Shibutani’s earned a level 4 on several of their elements, and were awarded a total of 77.82 points for the free dance, and 157.80 points overall.