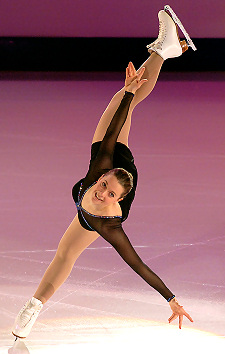 Student-athlete Emily Hughes, who turns 19 later this month, is making a successful transition to college this season. Hughes is following the family tradition of attending an Ivy League university, putting her education foremost in her future plans. Both of Hughes’ parents attended Cornell University, where her father, John, was also a student-athlete, playing on the school’s hockey team.

Hughes is also following in the footsteps of her sister, Sarah, the 2002 Olympic champion, who passed up a fortune in professional figure skating to enroll at Yale University. Rather than following the legacies of her parents and sister, Hughes elected to strike out on her own, opting to enroll at Harvard University, the nation’s most famous university and Yale’s fiercest rival, in Cambridge, Massachusetts.

“I’m enjoying the whole college experience,” Hughes said. “I’m living in the freshman dorm with a roommate who’s not a skater. I’m taking a full load of courses, 15 to 18 hours a semester. Some of my courses are economics, Spanish, and writing. I’m also taking a freshman seminar with a small group of 15 students. It’s for science-type things. It’s hard, but I like it a lot. I’m planning to major in economics or government.”

Hughes is training at the Skating Club of Boston, walking distance from the Harvard campus in Cambridge, Massachusetts. She has been working with Mark Mitchell and Peter Johansson, the first time she’s been coached b y anyone other than long-time mentor, Bonni Retzkin. “I just started working with Peter and Mark in September,” Hughes noted. “I didn’t start until I came to school because I wanted to enjoy my last summer at home before I moved away. I stayed at home as long as I could. This is the first time I’ve lived away from my parents and it’s a lot different, but I love it.”

Hughes only works on ice for two or three hours a day, five days a week. “It takes a long time to do all my homework,” she explained. “And I want to enjoy the whole college experience. I’ve been to some football games and I try to always make time to hang out with new friends from school who aren’t into figure skating. I’ve met so many amazing people who are not related to skating.”

Even with her schoolwork, Hughes is continuing to compete at a high level internationally. She finished fourth at both Skate America in October and Skate Canada in Quebec, Canada in November. In previous seasons, Hughes has always finished in the top five: third at the Cup of China in 2006, fifth at Skate America in 2005 and 2006 and fifth at the Cup of Russia in 2005.

She started skating when she was three and won her first trophy at four. “My whole family skates,” she said. “My brothers played hockey and my sisters skated.” Hughes was a slow starter, taking four years to learn a double Axel and not landing a triple until she was 13. She rarely made Nationals at the lower levels and never reached the podium until she won a bronze in senior ladies in 2005.

Then she quickly caught up internationally. Her first international medal was a bronze at the 2005 World Junior Figure Skating Championships, her only venture into that competition. Then in the next two years, she placed in the top ten at the World Championships, where she finished eighth in 2006 and ninth in 2007. She placed seventh at the 2006 Olympic Winter Games and hopes to compete at the 2010 Games in Vancouver, Canada.

At this point in the season, Hughes program is not unnecessarily complex. In the short, she has a triple lutz-double toe loop to go with a triple flip and double Axel. In the long, Hughes a triple salchow-double toe loop, triple toe-double toe, and double lutz-double toe-double loop for her combinations as well as a solo triple flip, triple salchow, triple toe and double Axel. “At the beginning of the season, I’m just hoping to get feedback so I can work towards Nationals,” Hughes said. “There’s always something to work on and something to improve.”

“I’m taking it one semester at a time and one competition at a time,” she added. “I’ve worked hard for the last three years to get where I am and I want to improve on my placements for last season. My university finals are right before Nationals, but I’m up to the challenge.” Improving her placements would mean winning U. S. Nationals and the ISU Four Continents Championships, from both of which she brought home silver medals in 2007.

Both of here 2007-08 competition programs are new. “David Wilson choreographed the short program,” Hughes said. “I’m using I Got Rhythm by George Gershwin. David gave me a few options and I liked that the most. Mark Mitchell did my long. He told me he wanted to use Carmina Burana and I didn’t know what to expect, but it’s a cool version without words. I like it because it’s so different from my short.”

For an exhibition program, Hughes is skating to Proud Mary by Tina Turner. “I did that for the Evening of Champions show and my whole dorm came to watch. It was great.” In addition, to the annual benefit show that Harvard students put on to benefit the Jimmy Fund at the Dana Farber Cancer Institute, Hughes is involved in numerous other charitable activities.

Two years ago, she auctioned off figure skating lessons to benefit the survivors of Hurricane Katrina. Last summer, Hughes participated in Skate for Hope to benefit breast cancer research, the Carltun on the Sound Cancer Benefit for the Cancer Center for Kids at Winthrop University Hospital in Mineola, NY; the Gliding Stars of Erie show to benefit the handicapped; and fundraising activities for the National Center for Disabilities, Friends of Fort Dupont, and other charities.

Off ice, Hughes enjoys reading, baking and listening to music. “I like a lot of different types of music,” she said. “I always have favorites, but they come and go. I just like something upbeat.” Some favorites have included Cold Play, the Dave Matthews Band and the Beatles. Although her dorm has a kitchen, she’s been too busy to use it so far. “Eventually I’ll get there to bake something,” she said.

Editor’s note: It was announced on Jan 14 that Emily Hughes withdrew from the upcoming 2008 U.S. Figure Skating Championships due to a hip injury.

“I’m extremely disappointed to have to miss the U.S. Championships,” said Hughes. “This is a competition I’ve been looking forward to all season.”

The athlete went on to say that the injury is bad timing, adding that she hopes to begin training again in four to six weeks.