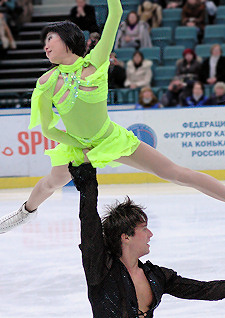 Yuko Kawaguchi (26) and Alexander Smirnov (23) perform a one-armed lift during their routine to Rondo Capriccioso.

Yuko Kawaguchi (26) and Alexander Smirnov (23) won the Pairs Short Program despite an error in their side-by-side spin which was graded only a level 2 and had negative Grades of Execution (GOE).

The team performed the first half of the spin in excellent unison, but Smirnov aborted the second half. The 2007 Cup of Russia and Skate Canada bronze medalists landed side-by-side side triple toeloops and a throw triple loop, but their triple twist had a poor catch. They received 66.30 (36.85/29.54) points.

Maria Mukhortova (22) and Maxim Trankov (24) opened their Otonal routine with a solid triple twist, but then Mukhortova doubled a planned triple toeloop during their side-by-side jumps.

The defending champions recovered to produce a level 4 lift and pair combination spin, but they lost a bit of unison during the side-by-side spins and their straightline step sequence was awarded only a level two. The students of Oleg Vasiliev finished their program with a strong throw triple Salchow and collected 62.26 (33.40/28.86) points for a second place finish.

Vera Bazarova (14) and Yuri Larinov (21) finished third with 57.47 (32.95/24.52) points. The 2007-08 Junior Grand Prix champions began their program with a strong triple twist, but they received a minor penalty for their side-by side-double Axels (-0.11 GOE). The team also received only a level one for their their death spiral and straight line step sequence, but they completed a level 3 lift, a level 2 pair combination spin, and a throw triple flip.

Ksenia Krasilnikova (16) and Konstantin Bezmaternykh (19) are currently fourth with 55.47 (31.03/24.44) points. The two-time and current World Junior bronze medalists completed side-by-side double Axels, a throw tripe flip, and a triple twist. However, their non-jumping elements were graded a level 1 and the team appeared rather reserved and cautious throughout their performance to Quidam from Cirque du Soleil.

The Championships debutantes, Lubov Illushechkina and Nodari Maisuradze, finished fifth with a nearly flawless performance which featured side-by-side triple toeloops, a throw triple loop, and a triple twist. Their intricate choreography and excellent carriage made them instant crowd favorites and the spectators booed at their marks 54.95 (31.61/23.34) points.

Training mates Arina Ushakova and Sergei Karev are sixth with 53.92 (29.74/24.18) points after Ushakova doubled a planned triple toeloop during the side-by-side jumps.