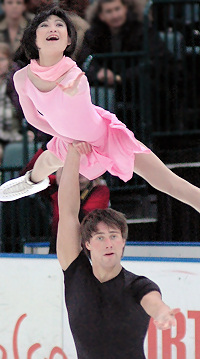 Yuko Kawaguchi (26) and Alexander Smirnov (23) won the gold medal at their first ever Russian National Championships.

Yuko Kawaguchi and Alexander Smirnov won the gold medal at their first ever Russian National Championships, while Maria Mukhortova and Maxim Trankov settled for silver. Arina Ushakova and Sergei Karev rose from sixth to third overall to win the bronze.

Kawaguchi (26) and Smirnov (23) opened their Love Story routine with a hard fall on a throw quadruple salchow attempt and Kawaguchi slightly dislocated her shoulder. The Japanese skater was determined to skate through the pain, but Smirnov wouldn’t allow it. He knew that skaters are allowed to interrupt their program in case of injury for a two minute pause to fix whatever is wrong.

“I saw that Yuko had trouble raising her hand, and even though she was determined to go on, I realized that she would not be able to perform other elements if she couldn’t use her hand properly,” Smirnov later explained.

The pause allowed time for Kawaguchi to fix her shoulder and the pair proceed to skate their program from the point of interruption. The students of Tamara Moskvina were almost flawless, performing a sequence of two triple toeloops, a triple twist, and a throw triple loop, but Smirnov turned out the landing of his jump in the side-by-side double Axels. Most of their non-jumping elements were graded level four, and the team earned 124.30 (65.15/60.16) points for a first place finish in the long and overall (190.60 points).

“We are very happy to skate here in St. Petersburg,” said Kawaguchi. “The audience received us very well. I think nowhere in the world do the people root so much for their local skaters as they do in St. Petersburg. They did, however, put additional pressure on us as we felt obliged to skate very well for them.”

Murkhortova (22) and Trankov (24) opened their program with a side-by-side triple toeloop-double toeloops and a triple twist, but then Mukhortova doubled her jump on the side-by-side triple Salchows while Trankov fell on his. The defending champions were visibly upset about the mistake, but fought through the rest of the program, delivering two flawless triple throws – a loop and a Salchow. Their step sequence was once again graded onlya level two and they received a level three for the pair combination spin and death spiral. The students of Oleg Vasiliev placed second in the long with 117.91 (59.53/59.38) points and overall with 180.17 points.

The team had mixed feelings about their results.

“On one hand, we won the silver medal and now we have one of each medals – bronze, gold and silver,” said Trankov. “It wasn’t unexpected for us, we thought that we might be second here. I think the performances here were the worst we did this season, but they were not the worst we have had over the course of the last two seasons, so we are not that much upset about it.”

“In a way it’s a debut,” Trankov continued. “It’s the first time in five years that I’ve fallen in the long program. We still have made a lot of progress in the recent months, and while these performances were a bit of step back, I think we would be able to make two steps forward from this point.”

Ushakova (18) and Karev (31) delivered a flawless performance, earning 109.29 (56.33/52.96) points for a third place finish and overall 163.21 points). The students of Natalia Pavlova landed side-by-side double Axels, a side-by-side triple toeloop-double loop sequence, a throw triple Salchow, and a throw triple loop. While their lifts were solid, they were mostly graded a level three, and some of their elements were even graded a level one.

“I’m very happy to skate here in St. Petersburg,” said Ushakova. “It’s the first time I competed here. A couple of seasons ago, Sergei competed at Nationals here with his previous partner (Daria Kazutchiz), and I often heard good words about the St. Petersburg public and now I know that it’s true.”

“I think we are a completely different team now than we were last season,” said Ushakova. “Then we were fourth at Nationals. Now we are more expressive, with better technical elements. We have a better understanding of our programs now rather than simply doing the required elements.”

Lubov Illushechkina and Nodari Maisuradze placed fourth in the long with 102.88 (53.79/49.09) points and moved up to fourth overall with 157.83 points. Illyushina singled a double toeloop in a triple toeloop-double toeloop combination and the catch of their triple twist was slightly flawed. Otherwise, the team was very strong and expressive, performing a throw triple flip and throw triple loop, as well as side-by-side double Axels. However, their death spiral and straighline step sequence were graded only a level one.

Ksenia Krasilnikova (16) and Konstantin Bezmaternykh (19) finished fifth in the long with 102.05 (54.02/49.03) points, slipping to fifth overall with a total score of 157.52 points. Their routine to Spartacus by Aram Khachaturian seemed rather uninspired and the 2007-08 Junior Grand Prix Final silver medalists opted to do only double Lutzes for their side-by-side jumps. Krasilnikova also fell on a throw triple loop.

Vera Bazarova (14) and Yuri Larinov (21) slipped to sixth place overall (148.73 points) after placing sixth in the long with 91.26 (44.10/48.16) points. The team attempted to do side-by-side triple Salchows, an element which they have never previously attempted at competition, but Bazarova fell out of an underrotated jump while Larionov popped his into a double. The mistake threw the 2007-08 Junior Grand Prix champions off their game and they made mistakes on other crucial elements: Bazarova put both hands down on throw triple flip landing, stepped out of her first jump in a side-by-side double Axel-double Axel sequence, and fell on a throw triple loop.