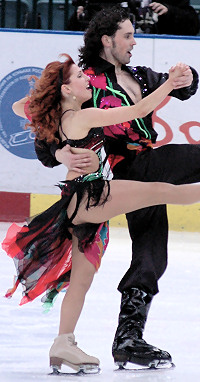 Jana Khokhlova (22) and Sergei Novitski (26) won the Original Dance with their Gypsy-themed routine to Two Guitars.

The 2007 Russian National silver medalists were flawless and expressive in their performance to Two Guitars, but their twizzles were a bit slow and they lost 1.00 point due to an extended lift. The highlights of their program was a complex combination spin, very impressive and fast lifts, and an intricate side-by-side step sequence. The team received a level four for all their elements and they are currently first overall with a total score of 106.78 points.

Ekaterina Rubleva (22) and Ivan Shefer (24) performed their “Gopak” Ukrainian dance much better than they did over a month ago at Cup of Russia. The team displayed more powerful and confidence with better character throughout the dance, however their twizzles were rather weak.

The 2007 Russian National bronze medalists also performed two very strong lifts, well integrated into the choreography and the style of dance, but the final rotational lift received only a level three. They placed second in the OD with 57.86 (23.09/19.26) and overall (92.54 points).

Ekaterina Bobrova (17) and Dmitri Soloviev (18) pulled up to third place overall (88.02 points) after placing third in the OD with 55.26 (30.44/24.82) points. Bobrova had to check her balance during a twizzle, but their lifts were strong and well suited to the music. The 2007 Russian Junior champions earned a level four on all their elements and their “Kalinka” was well received by the audience.

“I think we have grown up quite a bit since last year,” Bobrova told the press. “This season we are competing in Seniors, sharing the ice with much stronger couples than we faced before, and we try to live up to their level. But on the other hand, we are not concerned with placements this season. All we want to do is to skate clean and make a strong impression. I felt we skated better in Moscow (Cup of Russia), but we love competing in St. Petersburg. The atmosphere is great here and so are the hotel and the ice.”

Natalia Mikhailova (21) and Andrei Maximishin (23) skated a clean, but rather generic program to Gypsy tunes, which was highlighted by two strong lifts. However, their twizzle section in the side-by-side step sequence was flawed as they failed to maintain the constant distance between them. Both step sequences were graded a level two and they scored 52.94 (27.82/25.15) points for fourth place in the OD. With a total score of 85.80 points, the team slipped to fourth overall.

Anastasia Platonova (21) and Alexander Grachev (23) performed a dance to Eastern music which contained an impressive curve lift and a strong combination spin, but they appeared to miss the hold during the midline step sequence, which was graded level two. The students of Svetlana Alexeeva otherwise earned a level three on their non-touching step sequence. The 2007 Winter Universiade silver medalist were also very expressive and maintained good attack throughout the dance, earning 49.64 (27.06/22.58) points for a fifth place finish in the OD and overall (79.89 points).