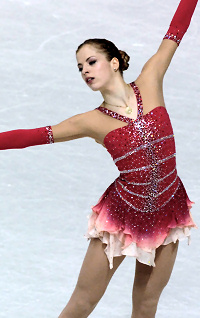 In the final event of the 2008 European Figure Skating Championships, Italy’s Carolina Kostner defended her title despite finishing second in the long program.

In total, the 2007-08 Grand Prix Final bronze medalist landed five clean triple jumps, but she run into problems with her non-jumping elements. Her spiral sequence was graded a level 1 and her final flying combination spin was severely flawed after she lost her edge on the landing.

Overall, the Italian champion’s performance to Dumsky Trio was very smooth as she glided effortlessly from one element to another, and her high presentation score almost allowed her to make up for the technical problems. She placed second in the long with 111.97 (57.96/55.04) points, but with a total score of 171.28 points, placed first overall.

“I don’t even know what to say,” said Kostner. “I just want to thank all of you for your support. I tried to stay calm and concentrated throughout the entire week, and I think I did it. I know I can skate better and I’ll give my best for the World Championships.”

At a post event press conference, Kostner revealed more immediate plans: “It’s really have been a tough week and now I can relax and party.”

When asked about her mistake on the triple Lutz in both programs, Kostner explained: “You know, I really like the Lutz. It’s one of my favorite jumps, but because I made a mistake on it in the short program I was, perhaps, too concentrated on how much I want to land it in the long program. And when the moment came, it was like…’oops!’.”

However, the 20-year-old does not plan to change a solo jump in the short program to a more consistent loop.

“My flip is a flip and my Lutz is a Lutz,” explained Kostner. “I see no reason for trying to replace it with a loop. I screwed it up this time, but I’m sure that I’ll be able to land it next time.”

The skater was also asked if she thinks she could defend her title next year with the 2009 European Championships being held in Helsinki, Finland.

“This second title gives me a lot of experience,” replied Kostner. “Now I know that I should be expecting. I know that Finnish skaters are very strong. I competed against them at the 2007 Finlandia Trophy, and they were good. Here at the Europeans they were also very good. So the next European championships wouldn’t be that unfamiliar… but I don’t really want to think about it right now!”

“I like to be able to do a new stuff,” continued Kostner. “I know that I’m not finished learning yet. I’m not sure if I can learn anything new for the Worlds, maybe the second triple-triple combination. But more realistically it’s a task for next season. It’s also a health issue, you have to be careful if you want to stay healthy, but I have a lot of fun. It’s my passion.”

Sarah Meier from Switzerland also kept her place at the European podium. Last year’s silver medalist fell out of landing of her triple flip and two-footed her second triple Lutz, but otherwise landed four clean triples. All her non-jumping elements were graded level 3 and 4, and her presentation was equally solid as she kept the character and the flow throughout all four minutes. The 2007 NHK Trophy silver medalist scored a seasonal best of 113.00 (57.96/55.04) points for the long program, and with a total of 169.44 points, moved up from fourth to second overall.

“I’m very very happy right now that I won the silver medal,” said the Swiss champion. “Last year I was a bit disappointed, but this year I knew it was going to be difficult. I’m proud that I landed two triple Salchows in this program, because I made a mistake on it yesterday. I’m really relived and happy it’s over.”

“The half hour after the warm-up was the worst in my life,” continued the 23-year-old. “I was so nervous. Each program seemed like it was going on for ten minutes, and I didn’t feel good at all. I thought I’d have to fight until the very end, even if I dropped onto the ice at the end. But I did it, so I’m really pleased.”

Meier also admitted that her poor results at the start of the season were probably as a result of starting too late.

“It wasn’t as if it was the motivation that was missing,” said Meier. “I was training hard all summer, but maybe I was too late to start the season (2007 Trophee Eric Bompard in mid-November). Then I realized that I had to change so many things in my programs because of the rules changes.”

The student from Bülach also modified her training schedule.

“Last year I ran out of steam after the Europeans,” admitted Meier, “so this year we have adjusted the workload so that I’ll peak at Worlds. It was my goal to win gold here, but when I came to Zagreb, I realized it was going to be much more difficult. In the last group, the other competitors were so much stronger than last year.”

Though the 2007 Nebelhorn Trophy bronze medalist doubled a Lutz and fell on her first triple loop, she managed to achieve the second highest technical score due in part to strong spins and footwork. While her presentation skills and complexity of her choreography wasn’t up to the leaders’ level, the 19-year-old still beat her previous personal best by 17 points, placing third in the long with 108.69 (56.21/53.48) points, and overall (165.65 points).

“I think this season has been very good for me,” said Lepistö. ” One month ago, I won the National Championships and I was very happy that I could come here. This is my first time at European Championships. I knew that with good performances I had a chance to be on the podium, but I didn’t expect it. I’m very speechless now.”

When asked to comment about watching her competitors skate, Lepistö replied: “I think Sarah (Meier) gave a very good and solid performance. I also saw that Julia (Sebestyen) started really well and I already thought that I would be fourth. I crossed my fingers. I’m happy that it went this way and I was the one who was lucky.”

Lepistö’s goal now is to gain more experience, which will happen when she makes her first appearance at Worlds in March. “Being on the podium here gives me a lot of confidence. I will train hard and try to be in very good shape.”

Lepistö, like everyone, has her idols in skating. “I looked up to the Finnish girls, Susanna Pöykiö and Kiira Korpi. It’s very funny that I am now competing against them. Also, I looked up to American skaters. I think they skate very beautifully and with good quality.”

When asked about her goals for 2009 Europeans in Helsinki, Lepistö replied: “First, we have a very tough competition in Finland. I want to be there, and now that I got bronze, I don’t want to be any lower.”

Julia Sebestyen of Hungary pulled up to the fourth place (162.89 points) with her performance to a medley of Edvin Marton’s music. The former 2004 European champion started strong, landing a triple Lutz-double toe loop-double loop, a triple flip-double toe loop, and a second triple Lutz – all of which were very solid and received positive Grades of Execution (GOE).

However, the Hungarian champion later fell apart, re-choreographing the program on the flight and popping triples attempts into doubles. She placed fourth in the long with 107.35 (53.51/53.84) points.

“Yesterday I did a good short program and I did a really good free,” said the 26-year-old. “I came here to get a medal, but now I’m happy with the way I skated, because I haven’t skated this well in competition for a long time. So this is a big step for me after last season. During the program, I was tired, but I heard the audience and I told myself, ‘I can do this’, and they motivated me to go on.”

Finland’s Kiira Korpi, who was second coming into the long program, slipped to fifth place overall (162.22 points) after an error-filled performance to music from Phantasia. Last year’s bronze medalist started her program well enough, landing a triple Lutz-double toe loop-double loop combination and a triple loop, but then she popped a flip into a single, and doubled a second Lutz and toe. With only three clean triples, even her beautiful lines, basic skating skills, and strong non-jumping elements couldn’t keep her on the podium. The 19-year-old earned 103.62 (50.03/53.69) points for a fifth place finish in the long.

“I’m a bit disappointed because I did too many mistakes,” admitted Korpi. “I felt pretty good, but not as good as yesterday.”

Valentina Marchei of Italy finished sixth in the long program and overall (153.34 points). Skating to Les Feuilles Mortes, the 2007 Merano Cup champion put both hands down on her opening triple Lutz, but immediately recovered and landed another triple Lutz in combination with a double toe loop. She also had a clean triple toe loop and a Salchow, but stepped out of another triple Salchow and singled one of her double Axels.

However, the Italian champion attacked all the elements with her trademark passion, and her non-jumping elements were all awarded a level 3 and 4, but the field this year was stronger than the last (when she finished fifth). Even with the better result, she slipped one place into the overall standings, receiving 99.65 (50.29/49.36) points for her long program.

“I’m not that satisfied even though it was my season best,” stated the 21-year-old. “I’m not disappointed either. I was really excited because I was skating in the last group. That never happened before, not even in the junior competition. There was no sleep for me last night. I couldn’t wait to get on the ice. At the practice I was great, but today not so good.”

Georgia’s Elene Gedevanishvili placed eighth in both the short and long programs, but with a total score of 147.09 points, finished seventh overall.

Jenna McCorkell of Great Britain slipped from seventh after the short, to eighth overall (145.57 points) after finishing 10th in the long.