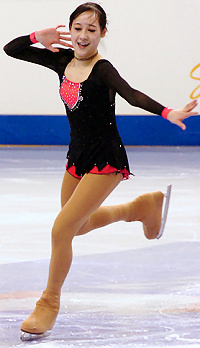 Angela Maxwell, 15, skates to Fever and Take Five for her short program (Junior Division) at the 2008 U.S. Figure Skating Championships.

The 2008 U.S. Figure Skating Championships are being held Jan 20-27 at the Excel Energy Center in St. Paul, Minn. Over 240 skaters are competing in the Novice, Junior and Senior divisions of the event.

Skaters are competing for spots on the U.S. Team that will travel to the World Championships in March, as well as the Four Continents Championships and the Junior World Championships teams. Each of those competitions could earn the skaters points towards ISU rankings that help determine which skaters will compete on the ISU Grand Prix next season. Additionally, a strong placement at the U.S. Championships will land skaters into official Team Envelopes for funding from U.S. Figure Skating.

Skating to Dave Brubeck’s Fever and Take Five, Maxwell narrowly outdistanced her competition with a strong triple toe-triple toe combination and a solo triple loop. The 15-year-old (2008 Midwestern Sectional champion; 2007 Novice champion) was a bundle of energy on the ice, and earned a total of 54.91 points in this phase of the competition.

Rizo, who finished 12th in this event last season, skated to The Giving by Michael W. Smith, and successfully completed the same technical content as the leader. The 16-year-old is just .32 points behind Maxwell heading into the freeskate tomorrow night.

Gilles, a Junior Grand Prix Finalist and fifth in this event last year, skated to Windspirits by Rene Dupere to finish third. The 16-year-old executed a triple lutz-double toeloop combination, as well as a triple loop, but was unable to match the leaders in the quality of those elements. Gilles heads into the freeskate with 52.63 points.

Victoria Rackohn (All Year FSC) is currently in fourth with 49.50 points, followed by the 4th place finisher from the Junior Grand Prix Final, Kristine Musademba (Washington FSC), who earned 49.10 points and is in 5th place.