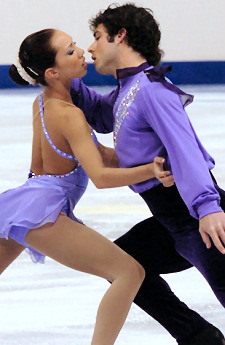 Keauna McLaughlin (Los Angeles FSC) and Rockne Brubaker (Broadmoor SC) skated away with the lead after the short program in the Championship Pairs competition.

Skating a romantic program to Beethoven’s Moonlight Sonata, the young team exploded onto the scene with an emotional performance that will have skating fans talking for years to come.

“It was our best short of the season,” said McLaughlin. “We were really focused and relaxed, and we were able to focus on presentation and expression. I think that helped us with the elements, too.”

Though this team is new to the championship level on the national level, their resume has the beginnings of something very special. After winning every competition that they entered last season, including the junior title at the U.S. Championships, the Junior Grand Prix Final, and the World Junior Championships, McLaughlin and Brubaker competed on the senior Grand Prix circuit this fall, earning two medals and a trip to the Grand Prix Final.

“Things clicked really well for us right off the bat,” explained Brubaker. “We’ve learned how to handle pressure and grow faster than maybe other teams might have to.”

Though McLaughlin put her hand down on a throw triple Salchow, every other element was as clean as a whistle, including a huge split triple twist and a difficult level 4 Axel overhead lift. The team earned a personal best score of 66.54 points for their effort.

“We’re done after this competition for the season,” explained Brubaker. “It’s okay because we look forward to taking the off-season to get some good programs choreographed.”

“It’s kind of a blessing in disguise,” added McLaughlin. “Of course we would love to go [to Worlds], but this just gives us another year to grow and progress as a team.”

After taking the fall season off, veterans Rena Inoue and John Baldwin (All Year FSC) have returned to competition with a bang. The 2006 U.S. Champions skated a clean program complete with clean side-by-side double Axels and a throw triple loop.

“I knew that I was going to have a good time out there tonight, and that we were going to be successful,” said a confident Baldwin. “I knew that we could do this, and I am happy with the way that it turned out.”

Inoue (31) and Baldwin (34) took time away from training for competitive skating to tour throughout the world in various shows and exhibitions. The duo only started serious training on January 9th.

“We have been caught up with the new rules of the new judging system for the past three years,” admitted Inoue, “and I knew that I wasn’t enjoying myself as much. (It) took the enjoyment of figure skating a little bit away from me, so it was good for me to do little shows and stuff [where] we don’t have to worry about rules. We were able to create our own style, and I really enjoyed it. So now I feel refreshed, and I am excited to be here.”

The duo skated to a personal best score of 65.24 points, using music by The Trans-Siberian Orchestra to showcase improved skating skills picked up from their touring experience.

“We’ve actually been touring since April,” Baldwin explained. “All that time that you didn’t see us over the Grand Prix, we were still performing and staying in shape.”

“There were about four different things wrong with my leg,” revealed Castille. “We pretty much missed our whole summer, and didn’t get back to consistent training until October.”

The defending champions performed their program to music from the Kill Bill Vol. 2 soundtrack with a haunting quality that matched Ennio Morricone’s score. However, the duo struggled technically, only receiving credit for side-by-side single Axels on which Okolski fell. As a result, the team actually lost 0.70 of a point from their score after the mandatory one point deduction for the fall.

“I just wasn’t aggressive enough on the Axels,” lamented Okolski. “I felt really confident after [Brooke] landed the throw,. I think I just pushed kind of hard after that, but then I backed off going into the jump.”

But other than the mistake on the Axels, Castille (21) and Okolski (23) showed promise of returning to the form that won them their first title last season. Their program showcased their signature split triple twist that earned 6.10 points, as well as much improved spins that earned a level 4 and positive Grades of Execution (GOE).

“I thought that our program was great,” admitted Okolski. “Our performance was great. I thought everything (other than the fall) else that we have worked on all season was really improved, so I am happy.”

“In the past, as we were practicing the level 4 elements, they were very hard,” explained Evora. “But now they are getting easier for us. We know that most people aren’t going for the most difficult bullets (elements that earn increased levels under code of points), so that is what we go for. It is starting to pay off for us.”

Last year’s pewter medalists skated a sassy and technically demanding number to Stray Cat Strut, and were rewarded with high levels on their pairs elements. Where the team struggled, however, was on the jumps. The duo received negative GOEs on their throw triple Lutz attempt, and also saw their side-by-side triple Salchows get downgraded by the technical specialist.

Still, Evora (23) and Ladwig (27) exhibited an inventive group 5 Axel lift, nice variations on the back inside death spiral, and a strong combination pairs spin, for which they were rewarded with a level 4 and loud cheers from the audience.

“We felt a boost from the crowd,” said Ladwig, who is originally from Minnesota. “We have plenty of fan support here. My family and in-laws are here, and Amanda’s family is here. It is always nice to have that kind of encouragement at Nationals.”

In fifth place after a disappointing performance, is Tiffany Vise (Broadmoor SC) and Dereck Trent (Broadmoor SC), the first couple to land the quadruple throw Salchow in competition. The team struggled at the beginning of their program, but regrouped to finish strong.

The pair opened with an easy level two split double twist, but then Vise struggled with the landing of their throw triple loop.

“It wasn’t the best skate that we have had all season,” reflected Vise. “I was disappointed with the throw, but what can you do? Everyone has their bad skates.”

Vise (21) and Trent (27) train in Scottsdale, Arizona, and earned high levels on the rest of their elements to remain in contention for a medal.

“Though it is mostly about skating our personal best, our goal is to make the World Team,” said Vise. “We just need to skate how we know how to skate, and then we can meet our goal.”

“It was great! I loved it,” said an ecstatic 17-year-old Yankowskas.

“It was exciting for us because this is our first time out as a senior,” added Coughlin, 22. “I said to her before we started to soak all of this up and enjoy it.”

Chloe Katz (SC of New York) and Joseph Lynch (SC of New York) placed seventh with 50.62 points, just ahead of Naomi Nari Nam (All Year FSC) and Themosticles Leftheris (Los Angeles FSC), who fell twice on their way to an eighth place finish.

Competition continues on Thursday with a full day of action including the finals of the junior dance competition, the championship original dance, and short programs from the junior pairs and championship ladies. The senior pairs skate next on Saturday morning.