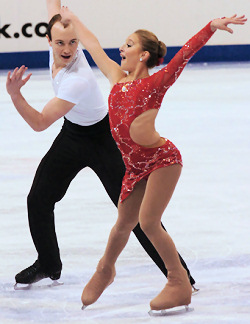 Jessica Rose Paetsch (14) and Jon Nuss (20) perform to music from the Capone soundtrack for their Long Program.

The junior pairs medalists were decided today at the 2008 U.S. Figure Skating Championships in Saint Paul, Minn. Jessica Rose Paetsch and Jon Nuss (Broadmoor SC) moved up from second place after Thursday’s short program to clinch the gold medal with a total of 143.19 points.

Overnight leaders Chelsi Guillen and Danny Curzon (Coyotes SC of Ariz.) had an uneven performance and had to settle for the bronze medals.

“It’s a great relief for us to win the national championships,” said Nuss. “We have been working so hard these last few months, and it’s nice to have all that work pay off.”

“This is our second year as juniors,” Paetsch added. “Last year we got third, and we tried to work more to try to win this one.”

Paetsch (14) and Nuss (14) are beginning to show signs of preparation to move up to the senior level next season as they completed a nice split triple twist in their “Capone” program. In addition, the duo performed two level four lifts that should have their senior counterparts looking over their shoulders.

The gold medalists did have some problems in their program, however, making small mistakes on both of their solo jumping passes, as well as on their straightline step sequence.

“The only down part of the program is when I tripped on the straightline footwork,” said Nuss. “But we got back on track to finish strong.”

Finishing in second place was the very young team of Tracy Tanovich and Michael Chau (Southwest Florida FSC), who were in third after the short program.

“Our performance went pretty well,” lamented Chau. “We had a few technical bobbles, but overall we skated fast and held our own, so we are satisfied.”

Tanovich was fearless on the ice, executing and landing elements that her much older competitors struggled with today.

“I felt confident on every move that I tried,” said the 11-year-old, as she clutched onto one of the many stuffed animals that were thrown to the team. “I made a little bobble on solo spin and a fall on the throw triple loop. Other than that, I thought that the program was very good.”

Skating to selections from The Nutcracker by Tchaikovsky, Tanovich and Chau (17) completed a throw triple Salchow and earned high scores for their overhead lifts. Overall, the team scored a competition total of 137.36 points, and plan to skate on the junior level again next season.

“I don’t think that there is any rush to move up to senior,” said Chau. “Especially since this is our first year in junior.”

Guillen (14) and Curzon (20) struggled with some of their high-risk elements, but were able to hold on to third place despite placing fourth in the freeskate.

“We just wanted to come here to our job,” said Curzon. “We wanted to skate well here and earn a medal and put our names out there for consideration for Junior Worlds, but our whole focus here was to put together two good programs.”

After landing a nice split double twist, Guillen made a mistake on their solo double Axel-double toe combination. The team attempted two throw triples for the first time in competition in their routine to music from The Legend of Zorro soundtrack, but could only land their toe attempt.

“We went for a second triple throw- a Sal(chow), but we unfortunately had a spill on it,” said Curzon. “Overall we are pretty pleased with how everything went.”

The team scored a competition total of 134.58 points, edging out pewter medalists Andrea Best and Trevor Young (Detroit SC) who defeated them in the freeskate.