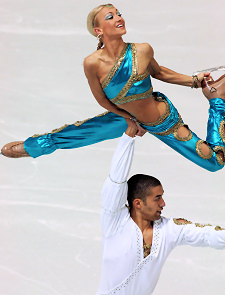 Aljona Savchenko and Robin Szolkowy of Germany perform a lift during their Short Program.

Defending champions Aljona Savchenko and Robin Szolkowy of Germany had to overcome their first obstacle. Their luggage with their skates was lost and only arrived in Zagreb late Sunday, forcing skaters to miss one of the practices.

They did, however, gain a comfortable distance between themselves and the rest of the field, despite making a mistake on their side-by-side triple toes. The 2007-08 Grand Prix Final Champions opened their routine with a huge throw triple flip and a high triple twist, but then Savchenko stepped out of her jump during the side-by-side triple toeloops. The were otherwise very solid in their routine to Bollywood’s Asoka soundtrack.

“This does not happen often,” Savchenko later said, regarding her mistake on the jump. “The beginning of the program felt good. I was simply too slow going into the jump.”

The German team’s spin, lift, and death spiral contained intricate transitions and interesting variations, which were efficiently used to express the character of the music. Their final step sequence, however, was graded only a level 1, which surprised the skaters as they usually got level 3 for this element. They did, however, received a level 4 for other non-jumping elements, and earned 70.36 (39.19/31.17) points. They currently lead with nearly an eight point advantage.

Szolkowy was dissatisfied with their performance. “It was fun to skate,” he later told the press, “but it didn’t go as we had expected. There were quite many wobbles and errors. We would have wanted to be on first place with a good skate.”

Russia’s Maria Mukhortova and Maxim Trankov were almost flawless in the execution of their mesmerizing Otonal routine. The 2008 Russian silver medalists opened with a triple twist, followed with side-by-side triple toes executed in perfect unison. They saved their third high risk element, a throw triple salchow, for the very end of the program, efficiently using it as a choreographic highlight. Their only mistake was a loss of unison during the side-by-side spins, and they also received only a level 1 for the step sequence. The students of Oleg Vasiliev scored 62.73 (36.21/26.52) points and are currently second.

“We had to pull ourselves together,” Trankov later commented, “We had good practices, but we need to cope with our nerves in competition. We made an error on the side-by-side spin.”

The team, who was pleased with their marks, didn’t feel the same pressure they felt last month at Russian Nationals.

“At Russian Nationals, we skated early as well,” recalled Trankov. “But this might be even better as we don’t have to live up to what the other teams did. Instead, they have to follow our example.”

Ukrainians Tatiana Volosozhar and Stanislav Morozov skated a clean short program to The Feeling Begins, which began with side-by-side triple toes (Morozov’s landing was somewhat tight) and a huge triple twist. Their throw triple loop was impressive as well, but Volosozhar slightly touched down with a hand on landing. The 2007 Winter Universiade silver medalist were otherwise clean, but not as confident as the German and Russian couples, and their step sequence and the final combination spin were graded only level 1. The judges awarded them 61.29 (35.50/25.79) points for a third place finish.

“We got a new seasonal best score,” said Volosozhar, “but actually we performed much better at the NHK Trophy in Japan. We had some errors. He (Morozov) was shaky on the toeloop, I put down my hand on the throw loop, and I left our a Choctaw in the step sequence. I was nervous in the warm up, my legs were shaking and I don’t even know why.”

The 2008 Russian champions, Yuko Kawaguchi and Alexander Smirnov, were smooth and elegant in their performance to Rondo Cappriccioso, but Smirnov had a wobble on the landing of his jump on the side-by-side triple toes, and the catch on their triple twist wasn’t clean enough. The team was also rather slow during both their spins, but it allowed them to execute the side-by-side spin in perfect unison and they gained a level 3 and 4 on them. Their step sequence, however, was only a level 1. They are currently in a close fourth with 61.25 (34.32/26.93) points.

“I am happy with this kind of performance,” said Smirnov. “We could have done better, of course, but this is our first time at Europeans. We feel a lot of responsibility. Skating early was fine for us, so we didn’t have to wait long and this might have been better for us.”

Teammates Arina Ushakova and Sergei Karev are currently fifth with 49.43 (26.72/23.71) points. Considering their lack of competitive experience, the 2008 Russian bronze medalists exhibited a surprising level of confidence and power in their routine to music from the Bandits soundtrack. Though Ushakova fell on her underrotated attempt at the side-by-side triple toes, the team otherwise performed a strong triple twist and throw triple loop. However, they received no credit for their pair combination spin and received only a level 1 for their step sequence and death spiral.

“Overall, we are happy with the way we skated,”commented Ushakova. “It wasn’t too bad for a debut, but I’m very upset about the final spin. We got no credit for it. Of course, I’m also upset about the jump, but that sort of thing happens. Sometimes I make mistakes on jumps, while the problem with a spin… it was just stupid. Perhaps we were too nervous. It’s our first major competition, so it’s a novel experience for us. We tried our best and we hope skate even better in the free program.”

The 2008 German silver medalists Mari Vartmann and Florian Just are sixth with 47.23 (28.05/19.18) points. They were rather solid and their program to Shine on You Crazy Diamond, and had a nice flow. However, the landings of both side-by-side triple toes and throw triple salchow were tight and they only did a double twist.

“We are really satisfied,” said Just. “This morning I had problems with my back. I pulled a muscle in my shoulder, so I skated very cautiously. I wasn’t even sure if I would be able to skate or not. I have to [twist my back] quite a lot during the program.”