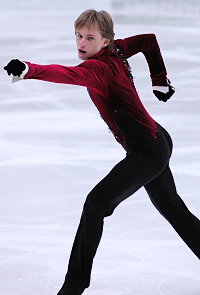 Sergei Voronov currently leads in the men’s field with more than a 10-point advantage after delivering a clean and inspired performance to Piano Concerto #2 by Sergei Rachmaninov. The student of Alexei Urmanov completed a clean quadruple toeloop-double toeloop combination, a triple Axel, and a triple loop out of steps. His injuries still prevents him from practicing the triple flip and triple Lutz, but he picked up 40.20 points for the technical elements (the highest score of the evening), 36.78 points for program components, and an additional bonus of 2.00 for landing a clean quadruple toeloop. His total score is 78.98 points.

Andrei Lutai opted to skated a conservative version of his Truman Show routine, opening with an impressive triple Axel, but only following up with a triple Lutz-double toeloop combination and a triple loop out of steps. His spins were relatively slow, and he only gained 34.14 points for technical elements, but received 34.18 for the components for a final score of 68.32.

Defending champion Andrei Griazev is currently third with 64.06 (29.55/34.51) points after he doubled his opening triple Lutz which he also stepped out of. The student of Elena Buyanova appeared to be somewhat lost for a while after the mistake, but pulled himself together to land a triple Axel followed by a triple flip out of footwork. The 21-year-old’s routine to Space by Dider Mourani was also highlighted by expressive step sequences.

Vladimir Uspenski edged out his older brother Alexander to finish fourth in the segment with 63.85 points after a clean skate to Moonlight Sonata. The 18-year-old landed a triple Axel, a triple Lutz-triple toeloop combination, and a triple flip out of steps.

In contrast, Alexander fell on his opening quadruple toeloop, which was intended to be a quadruple toeloop-double toeloop combination, but went on to land a triple Axel and triple Lutz in his Don Quixote routine to gain 63.32 (31.92/32.40) points.

Konstantin Menshov is currently in sixth with 62.79 (30.36/32.43) points. He performed a quadruple toeloop-double toeloop combination, but doubled a planned triple Axel and had a tight landing on a triple flip out of steps.