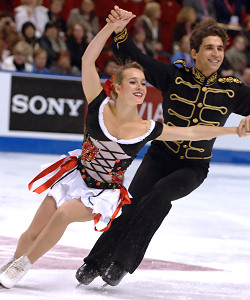 Pernelle Carron, 21, and Matthieu Jost, 27, perform the Yankee Polka for their Compulsory Dance at 2007 Skate Canada.

For French ice dancers Pernelle Carron and Matthieu Jost, it’s not just carrying on the traditions of the sport highlighted by such innovators as Isabelle and Paul Duchesnay or 2002 Olympic champions Marina Anissina and Gwendal Peizerat. Two-time and reigning World silver medalist Marie-France Dubreuil and Patrice Lauzon have also anointed them as their successors in the realm of dance lifts. “They must carry on the banner of the lifts,” Lauzon stated.

One of the newest French dance teams, Carron, 21, and Jost, 27, have been together for less than three years. Previously, Jost partnered with Roxane Petetin, reaching as high as 12th at the European Figure Skating Championships in 2004 and 23rd at the World Championships in 2003, but Petetin retired from the sport after the 2004-05 season. “My old partner had injuries,” Jost said, “so she had to quit.”

Carron previously skated with Edouard Dezutter in juniors, taking 13th place at the World Junior Figure Skating Championships in 2005. “He quit after Junior Worlds in Kitchener,” Carron stated. “Matthieu and I knew each other because we were in the same club, so we decided to try together.” “We started in July of 2005, but then I broke my ankle and was off the ice for two months,” Jost added. “So we got a late start for the season.”

Carron and Jost have already found more success together. They were ninth at Europeans in 2007 and 2008, took the bronze at the World University Games in 2007, and finished third at French Nationals in seniors their first two seasons before winning the silver this year. This season, the couple won their first senior ISU Grand Prix medal with a bronze at Skate Canada in Quebec. They also finished fifth at Trophee Eric Bompard Cachemire in Paris.

“The medal was a great satisfaction for us,” Jost said. “We came there to win the silver or bronze medal, although nobody except for us believed that this would be possible. Nathalie Pechalat and Fabian Bourzat were on the podium at Skate America, and we had to medal in order to compete with them. It has been a race between us and them for the second position this year.”

“Our goal was to medal in the Grand Prix and be the second couple for France for Europeans and Worlds,” Carron added. “We hope to continue for a minimum of two Olympics, but we’ll see.”

The couple’s medal at Skate Canada was a popular one because the duo has chosen Degeneration performed by Mes Aieux as their original dance in the folk and country dance rhythm. “Marie-France and Patrice picked our music this year,” Jost said. “We found the music quite late, towards the middle of July. Our original dance music was the most popular music on the radio in Quebec last summer and won all the awards. It’s a traditional Quebec folk dance.”

“Our free dance is to Frederic Chopin’s Nocturne,” Jost continued. “The composer did a great job. The music is really amazing.” Unlike some couples, Carron and Jost use new free dance music each year. “I like to change,” Jost said. “When you hear the same music all the time, it’s boring. Each year, I try to find new ideas by watching the skating in the galas.” Dubreuil and Lauzon, aided by Diana Ribas, choreographed all of their dances.

They are using Massive Attack by the British band of the same name for their exhibition program. “We did the choreography ourselves,” Jost said. “We do it all the time for galas.” Off ice, Carron listens to almost any kind of music, while Jost especially likes rock.

The dancers normally train in Lyon, France, where they work with Muriel Zazoui, Romain Haguenauer, and Benjamin Delmas, but they also work with Dubreuil and Lauzon on their lifts. They usually train for three or four hours a day on ice, six days a week, with another hour or two of off ice training in the summer. In the winter, they do off ice work only once or twice a week.

Jost’s introduction to the ice came when he was eight. “My parents took me to a sports camp, where you could try all kinds of sports,” he recalled. “I saw the skating and asked my parents to try it. I liked it so I continued. I started dance almost immediately as it is the specialty of the club in my town.” Carron started at six years of age. “All of my family skated for fun,” she said. “I started in the same club as Matthieu, so I also went quickly into dance.”

Carron is currently in her second year of law school, while Jost has completed a university degree in computer science. He works as a computer science engineer, outsourcing business computer work.

Both of the dancers enjoy participating in other sports for fun. Both play tennis and water ski, while Jost also plays golf. Carron also enjoys reading, shopping and going to the theatre.