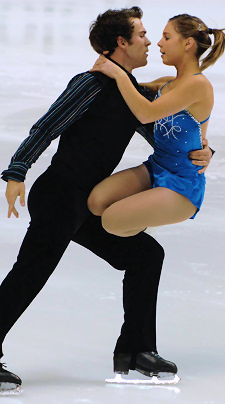 Jessica Dubé, 20, and Bryce Davison, 22, just missed winning their second consecutive Canadian pairs championship this season by a mere .15 point. But they came back strong after a disastrous fifth place in the short to qualify for Worlds and keep their season goals in sight.

“At the beginning of the season, we wanted to medal at our first two Grand Prixs,” said Davison, “so we were pretty happy to win Skate America and place second at Skate Canada to qualify for the Grand Prix Final.

The team wanted to retain their national title of course, but their biggest goal was to get into the top four at Worlds.

“There’s no big advantage for anyone in Sweden,” noted Davison. “It’s a neutral site.”

The couple finished seventh at Worlds in both 2006 and 2007, and tenth at the Winter Olympic Games in 2006. They won the ISU Junior Grand Prix Final in 2004 and placed second at the World Junior Figure Skating Championships that same season. The skaters also won the Canadian junior title in 2005; a year after Dubé won the same title with former partner Samuel Tetrault. Davison, originally from Walnut Creek, California, started skating with Dubé in mid-2004.

Dubé and Davison were leading at the Four Continents Championships last season when they collided on side-by-side camel spins in the long program, opening a bloody cut across Dubé’s nose and cheek that required 80 stitches. Although they missed the rest of the competition, they were back on the ice within a few weeks.

“The accident last year was just a fluke,” Davison said. “We want to be aggressive, so we’ll keep spinning close together. The accident just made us try to be sharper and more focused when we’re spinning.” “I don’t even have much of a scar,” Dubé added. “I can cover it easily with makeup, but I may have laser surgery after Worlds to remove the scar tissue.” The skaters did, however, work with a sports psychologist and a therapist related to post traumatic stress.

Annie Barabe and Sophie Richard train the skaters with assistance from Yvars Desjardins. They usually train for three hours a day, five days a week, with another hour a day for singles practice.

“Our training is focused on the Code of Points and what we need to do to get the most points,” Davison shared. “We’ll probably still be adapting it for ten years, but that’s the way sports evolve. I think it makes it more intelligible from a technical point of view, but it takes away from the theatrical side. It makes it challenging to match the technical and the theatrical.” “If we don’t have fun skating, our technical side gets worse,” Dubé added.

“We may replace the throw triple Salchow with a throw triple Lutz by the end of the year,” Davison noted, “but we still have to work to make it consistent. We were doing the Lutz in juniors, but it went away because it wasn’t necessary to have it. Jessica, being the kind of skater she is, landed the first three we tried when we started doing it again.”

“We worked mainly on our skating skills during the summer,” Davison continued. “We wanted to make the lifts and throws more consistent. We added a lasso lift as our change of position lift and we hadn’t done that since juniors. Then on our last star lift, we put in a new dance lift entry before it and added footwork to conform to the rules.”

“The long came from a show program that we did a few years ago after Calgary Worlds,” Davison explained. “We choreographed the program ourselves in about two hours and it means a lot to us.” “Every time people saw it, they said that it made them cry,” Dubé said. “It was such a perfect program for us. We still do it in our original version for galas.”

“They’re the same programs as last year,” Dubé noted. “We only did them two and a half times. Next year, we’ll have two new programs. Our skating fits lots of kinds of music, but we have a kind of romantic chemistry between us on the ice. We’ll be looking for something that goes towards our strengths.”

Both of the skaters also continued to compete in singles competition this year. Dubé finished sixth in senior ladies, but Davison, who was 15th in 2007, did not qualify for Nationals this year. “I won’t be continuing much longer,” said Davison. “It takes a toll on your body. I have all the triples, but my flip is pretty ugly. And I don’t have a triple Axel. I’d rather spend more time in pairs.”

“I was waiting to see how well I did this year,” noted Dubé, who made the international team with her sixth place showing. “Last season, I had surgery on my knees in September to repair torn cartilage on the outside of both knees. I didn’t fall either time I hurt my knees. I was just skating. It can happen to you when you’re just walking down the street. Normally, I can do all the triples, but I could only do two jumps well last season.”

Dubé includes a triple Lutz-double toe, a double Axel-double toe, and a triple flip-double toe in her programs, but no triple-triple combinations. “The triple toe is my worst jump,” she confessed.

In senior men, Davison used Dinnerman from the Thomas Crown Affair soundtrack for his short and Titan Spirit from Remember the Titans soundtrack for his long. “The long was my novice program,” he explained. “I won’t continue in singles after this season, so I wanted to go back to something I already knew and was comfortable with. That was my favorite long ever, so I wanted to use it for my last. I chose the short because I really liked the movie and never saw anyone skate to it.” Annick Schmidt choreographed the short while Sebastien Britten did the long.

Competing in senior ladies, Dubé is skating to music from the Patch Adams soundtrack for the short and Umbrellas of Cherbourg by Michel Legrand for the long. “I watched the movie and when the song played, I really liked it,” Dubé said of the short. “Bryce said it would be good for me. The long program is from the same music that Scott (Moir) and Tessa (Virtue) use for their free dance this year. Someone cut it for me to use all the parts you never hear. It’s a little more dramatic than what I usually skate to. Josee Chouinard did the short program for me and David Wilson did the long.”

Although they definitely plan to compete at the Olympics in Vancouver in 2010, the future past that time is undecided. “We’ll see what happens in Vancouver,” Davison said. “We’ll only be 26 and 28 by the 2014 Olympics, but we’ll see how the sport changes and make a decision after the Games. We really hope we’ll be able to go professional at some point.”

“After that,” Davison said, “I’d like to be a skating coach and be in some kind of business.” “I love biology and sciences, especially medical science,” Dubé stated. “But I also like fashion and photography. I like to do candid shots of people.”

Both of the skaters enjoy cooking as a diversion. Davison also enjoys playing video games and watching movies, while Dubé enjoys hanging out with friends and going to movies. They both listen to pop and rock music, but Davison also listens to a lot of alternative music.

The couple has an unusual sponsor, Cascades Paper. “They’re from near my hometown (Drummondville, Quebec),” Dubé said. “They like to support young athletes and they’ve helped a lot of other athletes from our region.”