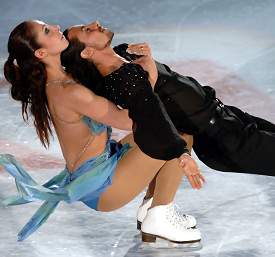 Italy’s top dance team, Federica Faiella and Massimo Scali, are having their most successful season in 2007-08. After a mediocre 2006-07 season, the dancers turned down several offers to do shows and tours last summer to focus on improving their skating for this season.

“Last year was not the best season for us,” Scali noted. “So we decided to focus on our programs for this season, so we said ‘no’ to the shows and tours. We know we have the talent to get what we want, but there are some other younger teams coming behind us now. It was hard last year to be an older team when there were new teams doing so well, so we were pretty sad last year.”

“We hope to prove that we are much better than last year,” Faiella added. “I think it was a good choice because we are more together and skating clean and sure.”

So far, they have been proven right. This season, the dancers earned their sixth and seventh bronze medals in the senior Grand Prix series at Skate America and the Cup of China, making it five consecutive years in which the team has won at least one bronze medal per year.

Last season, they placed third at Skate Canada and Trophee Eric Bompard Cachemire in France, their second consecutive bronze in France. Before that, they finished third at the Cup of Russia in 2004, as well as in 2003 at the Bofrost Cup, when a Grand Prix event was still held in Germany.

The dancers teamed up in 2001 after competing at the junior level with their former partners. Faiella previously competed with Luciano Milo for four years, and together they won the Italian National junior title twice, as well as silver at Junior Worlds, in both 1998 and 1999. Scali was partnered with Flavia Ottaviani for four years as well, and together they won five Junior Grand Prix events between 1997 and 2000, as well as the Italian National junior title in 2000.

Since joining forces, Faiella and Scali have won the Italian Championships five times and competed at two Olympic Winter Games, placing 18th in 2002 and 13th in 2006. At Worlds, they have been in the top ten since 2004 with a high of eighth in 2006.

The couple has also finished in the top eight at the European Championships since 2003, with a personal best this year of fourth place. “We are very happy,” said Scali. “We did a good job at these Europeans, especially after last season. We were more ready mentally to fight for a medal.”

“We’re glad to be ahead of the second French team (Nathalie Pechalat and Fabian Bourzat),” Scali continued, “because we lost to them at Skate America. It’s an improvement for us from the beginning of the season. Since Nationals, we worked a lot with Anjelika Krylova, and she should be proud of us. This was a hard Europeans for us.”

“We no longer care so much about the judging,” Scali stated. “We were thinking too much about points. People said to us that we are giving them so many emotions when we skate. So we just want to enjoy what we do and make people enjoy watching us.”

Pasquale Camerlengo and Anjelika Krylova coach the dancers when they train at the Detroit Skating Club in Bloomfield Hills, Michigan. Paola Mezzadri works with the team when they train in Milan, Italy. “We came there two years ago after the Olympics,” Scali explained. “Our Italian coaching team split up and told us we had to choose one or the other. We didn’t want to choose and we didn’t think that they could help us enough alone.”

“We decided to completely change our lives,” Faiella continued. “So we were thinking who could help us. We already knew Pasquale as a skater and a coach. We had worked with him in Berlin before Worlds in Dortmund. So we thought he could be a good coach for us. We contacted him and he told us the Detroit Skating Club really wanted us to come. They thought it would be a good thing for them to have us as a high-level team.”

“After a month there, we decided to move,” Scali said. “It’s very comfortable there. We live only five minutes from the rink, while in Milan it took a long time to get there. The club has everything. We never have to leave the club for anything, so there is no wasted time and we can spend 100 percent of our time training. The club really gave us everything we need to get the best performance.”

“It was quite different for me,” Faiella said. “All my friends and family are in Italy. I miss my family, but I’ve met a lot of nice people here. Massimo really likes to socialize but I’m more shy, so it was harder for me. Now we have many friends here.”

Normally, Faiella and Scali spend about four hours on ice with another two hours in ballet and two hours doing other workouts, five days a week. “We also do an hour of yoga,” Faiella said. “Liz (Punsalan) and Jerod (Swallow) suggested it because they thought it would be helpful for power. We don’t use it for meditation. We hold different positions and breathe and try to get our muscles stronger by using the right breathing. It’s a little bit mystical.”

Their training was interrupted this year due to passport problems. “After Europeans, we went to Sofia to do a show,” Scali recalled. “When we came back to Philadelphia, the passport control people stopped us and said we did not have a visa and no way were they letting us in. Four hours later, they sent us back to Italy and it took months to get the visa. We finally came back in May. While we were in Milan, Pasquale came to work with us but we mainly worked with Paola.”

Ludmila Vlasova, Corrado Giordani, and Barbara Melica choreograph the couple’s dances. This season, they are using Lu Rusciu de lu Mare and Santu Poulo by Suono Salento for their original dance. “It’s an Italian folk dance, but we didn’t want to do the traditional tarantella that comes from Naples since we thought that is was not the right rhythm for us,” explained Scali. “We are doing a pizzica, also a type of tarantella that was originated in Salento in southern Italy.”

“It’s very fun and powerful and we enjoy it,” Faiella continued. “We found the traditional costumes and took lessons from a special teacher. Pizzica means pinch.” “The pizzica is from the farm country in the south,” Scali elaborated. “When the women used to go and harvest the corn, tarantulas (spiders) were in the grass. They would bite the ladies and then they would dance like crazy because of the poison. From that, they made a dance for parties with festival costumes.”

For the free dance, Faiella and Scali are using music from the soundtrack of Yentl by Barbara Streisand. “The free dance was part of the work we wanted to do last year, said Scali, “but we had no time because we were changing coaches and learning new techniques. We were happy with the program we used, but the idea we originally had was the one we are using this year.”

“The dance is not the story of the movie,” Faiella added. “The idea came from Paola. She said this music can be very good if we show on ice a butterfly. That’s why I have wings. I open the wings when we start and die at the end. It’s very soft and light.”

“We like to show a different look each season,” Scali continued. “This year, we tried to work with a ballet style. We did the ballet movements on the floor with all the arm movements with Vlasova, our choreographer of three years ago. We wanted to be sure the program showed the real ballet style.”

The Italians are famous for their reverse lifts, in which Faiella carries Scali at some point in the program. “It’s more than ten years since I did a program without a reverse lift,” Scali said. “But Ludmila said that with this program, it did not fit. We were sad it did not fit, but each year we try to be different with it so this year the difference is that we will have no reverse lift at all.”

Their exhibition program is to Angel from the City of Angels soundtrack. “We did it for some shows at the club,” Faiella said. “The music is a slow, classical love song.”

Faiella and Scali have much in common. Both were born in Rome and started skating when they were ten years old. Neither comes from a family of athletes. Both reached the World Junior Figure Skating Championships with their first partners and finished in the top four. Scali, who just turned 28 in December, is a little more than a year older.

Off ice, the skaters both like to go to the lakes in Michigan to tan on the back, barbeque, and float on inner tubes. Scali also likes to read, cook and go to clubs and the cinema. Faiella prefers to stay home and knit or watch videos.

The dancers plan to compete at their third Olympics in Vancouver. “After that, we may be done,” Scali said. “We will have to decide where we want to live and what we want to do. We don’t want to plan now. We’ll wait until after the Olympics.”

“We’re starting to teach now,” he continued, “just little ones. My dream is to do shows for a few years. I want to find a challenging job that will let me stay in skating but I don’t want to be at the ice rink all day.” “I want to start a family,” Faiella noted.