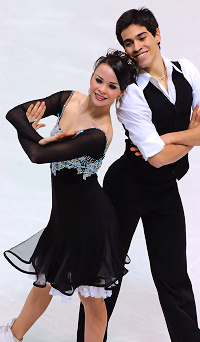 Cappellini and Lanotte were fourth at the World Junior Figure Skating Championships and third at the ISU Junior Grand Prix Final during the 2005-06 season. That was their only season together as juniors.

Cappellini started skating when she was three and switched to dance at 12, while Lanotte began at seven and went into dance at ten. Both of the dancers had three prior partners. Cappellini skated with Federico Bassi, Luca Lombardi and Matteo Zanni, reaching fifth at Junior Worlds with Zanni. Lanotte previously partnered with Adriana Jovino, Camilla Spelta, and Camilla Pistorello, placing ninth at Junior Worlds with Pistorello. Cappellini and Lanotte first started skating together in May of 2005.

“We don’t have as much experience as some of the other couples,” Cappellini acknowledged. “It’s only our third year and we still have different styles. We have to work even more on our unison.”

“We have different learning processes and ways of approaching situations,” she continued. “Luca just goes for it, but I have to understand what we’re doing first, so sometimes it’s frustrating for him.”

“Anna’s a pure talent and a good person and I’m very lucky to skate with her,” Lanotte said. “She’s a beautiful skater, very precise, everything I’m not.” “I used to have a partner whose personality was just like mine,” Cappellini noted. “We fought a lot. Luca and I have known each other for five years now and it seems like forever. Our friendship just keeps getting deeper.”

The dancers hope to continue for two more Olympics. “This year, we had no judge at Europeans and we have no judge at Worlds, so we don’t know,” Lanotte said. “We’d like to jump up in placements, but we’re enjoying the process. We hope for a long successful career but it’s a slow process. We got so much last year.”

Their success did not come easily. “I didn’t like the hip-hop,” Lanotte said. “It was very intricate and the rhythm kept changing.” “We did well at Europeans but we wanted to do our best at Worlds,” Cappellini said. “But we had problems with my boots and my shoulder at Worlds. My boots broke down at practice less than a week before Worlds and the new boots were much harder than my old ones. I had to skate a lot of hours to make them soft enough.”

“I had to change boots and blades again in the summer,” she added. “The ones I had were not right for me and I’m very sensitive about them. It took 20 days to get used to the new ones.”

“I had also hurt my shoulder before Worlds,” Cappellini continued. “I missed a few days of training and was on painkillers the whole time I was there. I had a torn labrum in my left shoulder and it hurt so much in the Biellmann spin that I could barely hold on. Then we fell on the upside down lift in the free dance. I had some minimal surgery in the summer, but I’ll probably have to go in after Worlds and have the cartilage repaired. I don’t want it to be with me for my whole life. I’ll have to take a month off to recover.”

The dancers started strongly again this season, winning a silver medal at Skate Canada and placing fourth at Trophee Eric Bompard Cachemire before moving up a spot to seventh at the European Championships. Their best previous finish in the Grand Prix was fifth at the French Grand Prix last season.

“Skate Canada was lucky for us,” Cappellini said. “Denkova and Staviski didn’t come and Gregory and Petukhov weren’t ready. We thought the French team would get a lot of support in Quebec, so we were happy to win second by a few points. We were very happy with our finish at Europeans. It was a small step up on a long road.”

“We had to make some changes in our dances after Skate Canada,” Cappellini noted. “Our free program worked well but we want to be even better for Worlds. Some people said one of the lifts might be illegal so we tried to lower it a little and changed the position of my free leg.”

“After Paris, we changed the entry and exit of our lifts to get a higher GOE (Grade of Execution),” Lanotte continued. “Last year we got level 4 on all our lifts but we need to make them more spectacular. We’re also trying to change the serpentine lift at the end of the program to make it more dramatic. We’ll see if something better comes up.” “Lifts aren’t our thing,” Cappellini noted. “Interpretation is our thing.”

They spend about four and a half hours a day on ice six days a week and another one or two hours off ice five days a week. “Roberto is very precise,” Cappellini said. “We worked a lot last summer on edges. He said they could be cleaner so we worked on that. My back was too upright on spins so I’ve been trying to get lower on my spins.”

Ludmila Vlasova and Giovanna Franzoni choreographed the couple’s dances for this season. “We’ve worked with Ludmila forever,” Cappellini said. “She was the choreographer for Barbara (Fusar-Poli) and Maurizio (Margaglio). We considered going to Delaware to see what others were doing, but the federation didn’t have any money to send us there. So we went to Russia for two weeks with Gorshkov’s group to see what it was like there and see what Domnina and Shabalin were doing.”

For the country/folk original dance, the dancers are using a Serbian folk dance, Bubamara by Goran Bregovic. “We tried an Italian folk dance first,” Lanotte said. “We had gotten the music from another couple who had used it before and were starting to build it, but it was just not a good idea. When our judges came in July, they told us it was not entertaining, even boring.”

“Some other Italian dancers had used Bubamara six or seven years ago, but I remembered it,” Cappellini added. “Roberto found the second part online. He’s a computer geek too.”

The dancers are using the classic Italian opera La Traviata by Guiseppe Verdi for their free dance. “We listened to a lot of stuff, but we wanted something with some more class,” Cappellini said. “Krylova and Ovsiannikov skated to La Traviata before, but they only used a little part. We wanted to transfer the opera to the ice and do the complete story, from the beginning to the ball to their night together and death.”

“The beginning is like a flashback,” Lanotte continued. “We start from the end. We are a very passionate team and I think we can transfer the love and passion of the opera to the ice.” “We had dated so we did have some chemistry,” Cappellini revealed.

They are using E Luciean Le Stelle by Luciano Pavarotti from La Traviata for their gala program. “We didn’t spend too much time on a gala program,” Lanotte said. “Maybe we’ll build something funny for exhibitions next summer.”

Cappellini is in her first year of university studies in foreign languages and literature. “School is going much slower than it should be, but when I’m done, I’ll have something to hang on to,” she said. “I want to teach in high school. It’s not a big career, but I had a teacher who inspired me and taught me about life and I want to do that. Sometimes I think I’d like to run a bakery. I like to cook things and bring them to Luca in the morning.”

Lanotte is also studying in his third year at university. “It’s something like public relations,” he said. “It’s something special that we have it Italy called languages of the media. I studied economics for my first few years but then I decided to change courses. I want to be a journalist or do something in a sports-related job.”

In their free time, both skaters like to drive the new cars that they received from one of their sponsors, Lancia. “Anna’s is a light brown color that changes to gray with the weather,” Lanotte said. “Mine’s a dark blue. But she has a sunroof and I don’t.”

Both of the dancers also like to spend time on the Internet. Lanotte loves computers and downloads lots of videos and information about figure skating, including all the latest gossip. “I’m into IM and Facebook,” Cappellini said, “but only late at night. That’s the only time I have for socializing.” On her day off, she helps her only sister and her fiancée build furniture and helps plan their wedding. “My sister was a skater and I was jealous of her,” Cappellini said. “That’s why I first started.”