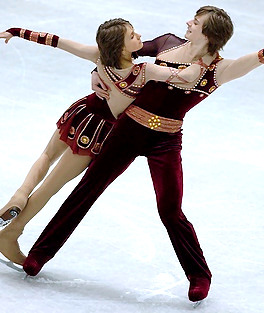 In their third trip to this event, Ksenia Krasilnikova and Konstantin Bezmaternikh of Russia won the title after winning the bronze in both 2006 and 2007.

Teammates Lubov Iliushechkina and Nodari Maisuradze captured the silver in their first international debut, while Huibo Dong and Yiming Wu of China rose to cinch the bronze in their first appearance at this event.

Iliushechkina (16) and Maisuradze (20) delivered a fun and entertaining routine to a medley of ABBA music, but it wasn’t flawless. Iliushechkina put her hand down on the landing of the first jump in their side-by-side triple toeloop-double toeloops, and later fell on her jump in the side-by-side double Axels. The team also encountered a problem on the final pair combination spin and also received a deduction for a time violation.

Nevertheless, the new team from Moscow skated with good speed as well as with a sense of fun and enthusiasm. Their program was highlighted by some good elements which included a solid throw triple flip, throw triple loop, and two level 4 lifts. They placed first in the long with a new personal best of 92.81 (48.33/46.48) points, but remained in second overall with a total score of 148.12 points.

“We are here for the first time participating in the Jr Worlds, so we are not very experienced,” admitted Iliushechkina. “Our performance was not the best we can do. We can do much better. In the short program I made a mistake and I did it again here.”

“It was not our best,” added Maisuradze. “We skated much better when we competed in Russia (Nationals), but it was ok considering this was our first international competition.”

Despite the mistakes, the 2007-08 JGP Final silver medalists showed good speed and nice edges, and produced a two good lifts as well as a good throw triple loop. They placed second in the long with a personal best of 91.82 (46.73/45.09) points, but maintained first place overall with a total score of 144.86.

The team had originally planned on doing side-by-side triple toeloops and a triple twist.

“We didn’t have any opportunity to practice the side-by-side jumps in the warm-up,” explained Bezmaternikh, “so we followed the advice of our coach to just do double toes. We really wanted to do a triple twist but [Krasilnikova] got confused, she mixed it up and just did a double.”

Dong (19) and Wu (21) both showed excellent speed and skated ‘up’ to the dramatic and dynamic music of Exodus performed by Maksim Mrvica. The softer section of the music was interpreted very nicely with their level 4 spiral sequence and and pair spin, while their straightline footwork accented a lively section which had the crowd clapping along.

The team, coached by Bin Yao and Yu Sun, also nailed their side-by-side triple toeloop-double toeloop combination, side-by-side double Axels, and a throw triple toeloop. However, Dong put a hand down and two-footed the landing of a throw triple Salchow. Despite the mistake, the they scored a new personal best of 90.17 (49.33/40.84) points, and with a total score of 141.33 points, rose from fifth to third overall to capture the bronze.

“This definitely was our best performance of the season,” said Dong. Wu agreed, adding, “This was a very strong performance. We did almost everything as we have in training. We made some small mistakes in some elements, but generally the whole program was acceptable.”

“We did two Junior Grand Prix events,” continued Wu, “but we competed in our first Junior Worlds and we felt a little nervous. We did not think about the result though, but just about taking one element at a time and to finish all elements successfully.”

USA’s Jessica Rose Paetsch and Jon Nuss showed power, speed and attention to detail to in their Capone routine. The 2007-08 JGP finalists delivered a throw triple Salchow, a very good level 4 lift, and throw double loop. However, the triple twist was a bit crashy and Paetsch fell on the side-by-side double Axels as well as on an underrotated double toeloop (in combination with a double Lutz).

Ekaterina Sheremetieva (16) and Mikhail Kuznetsov (19) of Russia, who stood in third after the short, placed fifth in the long with 84.20 (39.88/45.32) points with their intense routine to Nostradamus by Maksim Mrvica. The JGP Final bronze medalists produced a solid throw triple flip and double twist, but Sheremetieva struggled with her jump on the side-by-side double flips and fell on a throw triple loop. With a total score of 136.14 points, the team slipped from third to fourth place overall.

Maria Sergejeva (15) and Ilja Glebov (20) of Estonia showed interesting choreography in their routine to music from the Kill Bill soundtrack. Their program featured a very good triple twist, a level 4 lift, and side-by-side double Axel-double toeloops, however, Sergejeva stepped out of a throw triple toeloop. The team from Tallinn earned 84.10 (46.83/37.27) points for a sixth place finish, and rose from ninth to sixth place overall with 131.02 points.

China’s Yue Zhang (15) and Lei Wang (19) delivered a light and enchanting routine to Coppelia by Leon Delibes, earning 79.70 (39.06/42.64) points for a seventh place finish in the long. Their program featured a solid throw triple Salchow, however, Zhang fell on her first jump in a triple toeloop- combination, fell out of her jump on the side-by-side double Axels, and fell on a throw triple toeloop. They slipped from fourth to seventh place overall with a total score of 130.92 points.

Canadian Junior champions Monica Pisotta (16) and Michael Stewart (20) placed eighth in the long and overall with 127.23 points. The team showed excellent relationship to each other, however, Pisotta had problems on both the throw jumps. The team also struggled with a lasso lift and the side-by-side double Axels.

Teammates Amanda Velenosi (15) and Mark Fernandez (19) finished ninth in the long and overall (125.46 points). The team struggled with their both their side-by-side jumping passes, and Velenosi stepped out of a throw triple Salchow.

USA’s Chelsi Guillen and Danny Curzon, who were in sixth after the short, placed 12th in the long and 10th overall (123.93 points).

The event continues with the Original dance and the Men’s Free Skate.