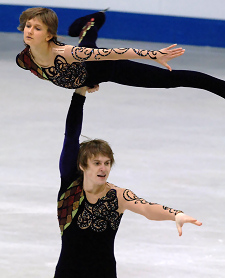 Ksenia Krasilnikova (16) and Konstantin Bezmaternikh (19) of Russia perform a lift in their Short Program to Quidam from Cirque du Soleil.

Russia dominated the Pairs event despite the absence of Vera Bazarova and Juri Larionov, who won the JGP title earlier this season.

Bazarova and Larionov were unable to compete due to a positive drug test for Furosemide by Larionov on November 26, 2007, and are currently facing a two-year-ban.

According to the investigation by the Russian Federation, Larionov took the prohibited substance inadvertently and only once. He was excluded from the national team and banned from competitions for the rest of the season for “irresponsible use of medication”.

The final decision on sanctions will be made by the International Skating Union (ISU). Until then, the team, who won silver at this event last year, are currently suspended from all national and ISU competitions pending the outcome of the investigation.

“Not so bad for all three of us,” said Bezmaternikh, referring to themselves as well as the other two Russian teams. “Each of us could have done better. Each of us did not show exactly what we can do.”

The team was asked which element they would take out the of Short Program if they could. “Side-by-side spins, ” Krasilnikova replied, while Bezmaternikh said he would add another lift.

Debuting in their first international competition, Iliushechkina (16) and Maisuradze (20) placed second in the short with 52.05 (30.31/22.74) points. Performing to The Gadfly by Dmitri Shostakovich, the newly-formed team executed very good side-by-side double Axels and an excellent double twist, but Iliushechkina took a hard fall on a throw triple toeloop. The Russians otherwise skated with good speed and showed good interpretation of the music.

“We only started to compete this season,” noted Iliushechkina, “so obviously we did not show everything that we are capable of. Overall, we feel it was quite good.”

When asked who they idolized in skating, Maisuradze mentioned countryman Anton Sikharulidze, while Iliushechkina admires Aljona Savchenko of Germany because she is the “boss” of the team.

As with most pair teams, both skaters were single skaters before they teamed up. Iliushechkina felt the most difficult part about skating pairs was learning to skate with a partner. However, Iliushechkina nominated her partner as the “boss” of their team.

When asked if they could remove an element from the Short Program, both agreed on the side-by-side spins.

Teammates Sheremetieva (16) and Kuznetsov (19) placed third with a new personal best of 51.94 (30.05/21.89) points for their routine to Winter from Four Seasons by Vivaldi. The 2007-08 JGP Final bronze medalists showed excellent speed and very good unison in their program, however, Sheremetieva couldn’t hold onto the landing of a throw triple toeloop which resulted in a turnout. They otherwise displayed impressive spins, as well as very good level 4 lift.

The team, who missed most of last season when Sheremetieva broke her foot, is excited about competing in their first Junior Worlds Championships. “We’re not too nervous,” offered Kuznetsov. “Let’s see what happens tomorrow.”

China’s Yue Zhang (15) and Lei Wang (19) placed a very close fourth with a new personal best of 51.22 (30.48/20.74) points for their charming nautical routine. Zhang struggeled with her jump on the side-by-side double Axels, but the 2007-08 JGP finalists otherwise delivered a solid double twist and throw triple loop.

“We had two minor errors,” noted Wang, “but overall it was a quite good performance. We got a good score and a new seasons best, but we’ll still have to work hard tomorrow in the free skating.”

Teammates Huibo Dong (19) and Yiming Wu (21) are in a close fifth with 51.16 (30.87/20.29) points. They showed excellent speed in their routine to Tosca, and their impressive elements included a high lateral double twist and a huge throw triple toeloop. However, Dong caught her heel on the landing of her jump in the side-by-side double Axels, which resulted in a -1.60 Grade of Execution (GOE).

USA’s Chelsi Guillen (14) and Danny Curzon (20) placed sixth with a new personal best of 49.37 (30.34/19.03) points for their routine to Adagio for Strings by Samuel Barber. The U.S. Junior bronze medalists captured the subdued and soft feel of the music very well, and showed excellent unison in their program which featured a throw triple toeloop, side-by-side double Axels, and good spins.

Both skaters, along with their coach (Doug Ladret), were obviously very pleased with their performance.

“We skated our best,” said Guillen, “clean like we wanted to do.” “Each competition we’ve gotten a little bit better,” added Curzon. “We’ve finished this program off on a good note here.”

The team, who has only been together a year and half, are in their last year of eligibility as juniors. “Getting to come here has been such a treat,” said Curzon, “kind of like the cherry on top of the year. Getting her (Guillen) all caught up with her pairs tests has been the hardest part.”

“At the beginning of the season, this (JR Worlds) wasn’t really a goal for us,” added Guillen. “We just hoped to skate good at nationals and see what would happen. It’s so amazing to come here to skate.”

Canadian Junior champions Monica Pisotta (16) and Michael Stewart (20) are in seventh place with a new personal best of 48.29 (29.80/18.49) points. Their routine to Fire on Ice by Mortazan featured synchronized side-by-side double Axels, a throw triple toeloop, and good straightline footwork and spins.

USA’s Jessica Rose Paetsch and Jon Nuss are in eighth after the short with 48.01 (27.75/21.26) points. Paetsch fell on her jump in the side-by-side double Axels, but the U.S. Junior champions otherwise expressed both softness and sharpness of the music in their routine to Por Una Cabeza by Carlos Gardel which featured a strong double twist and level 4 lift.

Canada’s Amanda Velenosi and Mark Fernandez found themselves in a disappointing 10th with 46.88 (28.64/19.24) points. The team, who were fifth at this year’s JGP Final, produced an excellent level 4 lift and side-by-side spin, but had a minor problem on the side-by-side double Axels (-0.23 GOE). Velenosi also put both hands down on the landing of a throw triple toeloop.

“A couple of mistakes, one on the throw and a small one on the Axel,” said Fernandez, when asked about their performance, “but generally quite well.”

Maria Sergejeva and Ilja Glebov of Estonia are currently in ninth place with 46.92 points.

Only two of the 20 pair teams received more than level one on their footwork. Pisotta and Stewart received a level 3 as did Japan’s Narumi Takahashi and Mervin Tran, who are currently 13th.