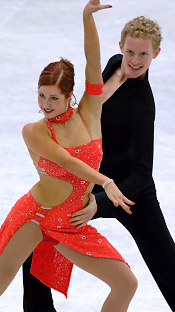 The 2008 ISU World Junior Figure Skating Championships are being held Feb. 26 – Mar. 1 in Sofia, Bulgaria at the Winter Sports Hall. It is the second time since 2001 that Sofia has hosted this event. Approximately 209 skaters from 50 different countries are competing in Sofia.

The competition kicked off on Feb. 26 with the Compulsory Dance and the Pairs Short Program.

The Compulsory Dance (CD) of the event was the Cha Cha Congelado, which was created by Bernard Ford, Kelly Johnson, Laurie Palmer and Steven Belanger. It was first performed in 1989 in Richmond Hill, Ontario.

USA’s Emily Samuelson and Evan Bates placed first in the CD, followed by Russia’s Maria Monko and Ilia Tkachenko and Vanessa Crone and Paul Poirier of Canada. Kristina Gorshkova and Vitali Butikov of Russia are currently in a close fourth.

Samuelson (17) and Bates (19) appeared a little “studied” in their dance, but the team skated a precise and exact Cha-Cha with excellent matching lines and extension. Their timing and expression was also very good, and the 2007 Junior Grand Prix (JGP) Final silver medalists earned a new personal best of 35.11 (18.99/16.12) points.

The Cha Cha Congelado was also the CD chosen for the JGP Final, and Samuelson and Bates were happy with their improvement.

“When we went to the Final, we weren’t really satisfied with our performance and I think here we gave a much stronger performance and we’re very happy with the score,” said Bates. “It’s a fast dance and there are a lot of steps and not a lot of ice to fit them in. You have to be deep, you have to be quick, and also maintain speed and be on the music. So there’s a lot of things going on.”

Both Samuelson and Bates enjoy skating to latin music.

“We worked a lot off-ice with a ballroom instructor,” offered Bates. “Last year we had a latin free dance, which, at Jr Worlds last year didn’t go very well.” Gesturing toward his partner’s dress, Bates said, “In fact that’s the dress. It’s the same dress from the free dance last year. We couldn’t throw the dress away after that.” “We just thought it fit the character of the dance of all the dresses I have,” added Samuelson, regarding the dress. “You spend so much money on dresses and everything, and it’s nice to re-use them.”

Monko (17) and Tkachenko (21) put out an enthusiastic and crisp performance, showing excellent expression as well as very good speed. The JGP Final champions earned a new personal best of 34.99 (18.92/16.07) points for a very close second.

“We are happy,” said Monko. “We skated quite well and we’re just happy that this is our last competition (of the season) and we were able to show off our work we’ve done this season. We skated this dance at the Junior Final and I started to like this dance this season. Before I didn’t like it as much. Now it was the best of all the dances for us this season.”

“We felt it was an advantage for us to have skated the Cha Cha many times in competition this season,” added Tkachenko. “We didn’t have to go into details of new dances. We just had to repeat and hone the Cha Cha. We had no other choice than to like this dance as we had to skate it.”

Crone (17) and Poirier (16) placed third with a new personal best of 33.71 (18.38/15.33) points. The Canadians skated close together in their dance, which had excellent expression and very deep edges and curves.

“I feel our performance was very strong,” said Crone. “[When] we did it earlier in the year, there wasn’t as good pizzazz and connection, but this was very good for us and we worked so hard to get that out.”

Poirier agreed, adding, “We’ve really been working on the technical aspect of the dance as well, and I think it’s really paid off for us. Since the JGP Final, we looked at the top teams that medalled and we saw what we needed to do to be medal contenders and we pushed [ourselves].”

“Last year was more nerve-racking ’cause we didn’t know exactly where we were going to be,” said Crone. “This year we had a goal and we want to stay with that goal and hopefully we can achieve that.”

“It felt good,” said Gorshkova. “We skated really well. We also liked the ice rink…it has a nice ambiance. Honestly, I can’t say if it was better here or at the [JGP] Final. It was quite good in both events. I really like the Cha Cha. It’s a fun dance and it probably suits our character.”

USA’s Madison Hubbell (17) and Keiffer Hubbell (19) are in fifth with 30.52 (16.80/13.72) points. The brother-and-sister team attacked the dance, and skated very close together while displaying very good extension and matching leg lines.

They U.S. Junior champions missed the 2007-08 JGP series as Keiffer was recovering from a hip (nerve and muscle) injury.

“It’s definitely exciting,” said Madison, about being back. “We’re happy mostly because we’re back in good health and ready to get back out there. It’s nice to be back in Sofia… it’s brought us good luck before, so hopefully it will again.”

“We had a good JGP experience last year and we definitely knew how to prepare for international competition,” said Keiffer. “Basically we had to remember and maybe over-prepare more than we would, but I don’t think we’re at a disadvantage at all.”

The siblings were happy with their marks. “It’s a fun dance,” said Madison. “It’s kind of hard, just because of the quickness of the steps and how deep the pattern is. “It’s hard to have the proper pattern within a rink especially when you’re going from NHL to Olympic size and back and forth. We skated it pretty well.”

Isabella Pajardi and Stefano Caruso of Italy, who finished seventh at the JGP Final, took a fall in their dance, and are currently in 14th place.

Visibly upset, Pajardi left it up to her partner to explain what happened. “At the first sequence, she turned backwards and tried to push and lost her edge,” said Caruso.