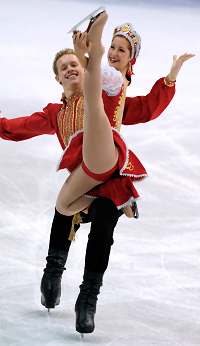 USA's Emily Samuelson and Evan Bates perform a lift during their Original Dance to Kalinka.

USA’s Emily Samuelson and Evan Bates maintained their overnight lead after placing first in the OD, while Vanessa Crone and Paul Poirier of Canada rose from third to second place.

Russia’s Kristina Gorshkova and Vitali Butikov, who stood in fourth after the Compulsory Dance (CD), rose to third overall, while teammates Maria Monko and Ilia Tkachenko slipped to fourth.

The only flaw in the program was a slight trip by Bates just after the midline step sequence, however, this did not result in a deduction as it was not on an element. The 2008 U.S. pewter medalists also produced two good level 4 lifts, and earned 57.84 (31.74/26.10) points for a first place finish in the OD. With a total score of 92.95 points, the team maintained their lead by just over a point.

“For us today’s performance was pretty good,” said Bates. “We had one small error by me, but other than that we’re really happy with how we skated the rest of it. It went really well.” “We had a lot of fun out there,” added Samuelson. “We portrayed Russian folk as best we could. It felt great.”

The team was asked what their initial reaction was to the idea of the Folk Dance for an OD, and how they felt now.

“When we first heard about the OD being folk, we thought it was something new and interesting,” recalled Samuelson. “We were excited to try something that we had never done before. We bought DVD’s and watched Russian Folk dancing so we could really get the feel of what we were supposed to portray on the ice. Even now, we’re still really happy with the program. It’s a great choice having folk for the OD because there’s so many different countries folk dances out there.”

“I think the folk is a good idea because in the past we’ve had the same,” said Bates. “Last year we had a tango and the year before latin, and it didn’t really give much opportunity to do something different like the folk has this year. I think it’s good for the audience. They don’t have to sit through 24 tangos – and the judges especially.”

Incidentally, the International Skating Union (ISU) has been discussing the possibility of selecting the Folk/Country OD for the upcoming Olympics in 2010.

“I had no idea,” said Bates. “I don’t see any problem with it.” “The Olympic season is only two years away,” added Samuelson, “so it will be close to this year. I hope that teams would try to portray different folk than the one that they have this year if they decide to go with that. Every original dance theme is a new challenge for every skater, so no matter what they do, it will be good.”

Crone (17) and Poirier (16) performed a lyrical and flowing routine to Romanian Gypsy in which the elements were incorporated seamlessly into the choreography. The 2007-08 JGP finalists were one of only two dance teams to receive a level 4 for all the elements in the program, which they skated with seemingly effortless speed. Their circular footwork demonstrated very close holds, smooth turns and deep edges, and when the beat of the music picked up for the midline steps, the team showed very good speed as well as perfectly synchronized twizzles.

The team from Ontario also performed an interesting curve lift in which Poirier was in a backwards shoot-the-duck position while Crone changed positions. They completed their dance with a very good fast one-armed rotational lift and combination dance spin, placing placed second in the OD with a new personal best of 57.52 (32.45/25.07) points. With a total score of 91.23 points, the Canadians rose from third to second overall.

“We were especially pleased with our performance today because we really hit all the points we had been working on this last month after Nationals,” said Poirier. “We’re really happy that the performance went well and we were able to do all of our elements and keep the performance up at the same time.”

“We skated very well,” said Crone. “We tried to portray to the audience and have a connection with each other, so we did that and we also kept our speed. We did all that we wanted to do.”

Though second, the team received the highest technical mark in the OD. “We didn’t know that,” said Poirier. “It’s very exciting for us to show that we can keep the technical difficulty up as well as the performance.”

Gorshkova (19) and Butikov (20) opened their Greek Folk dance with a midline step sequence and exceptional synchronized twizzles that were both graded level 4. Their level 4 curve lift with Gorshkova in an inverted position received +2 GOEs from 7 of the 12 judges. The Russians also skillfully performed a cleverly choreographed level 4 serpentine step sequence that exhibited a variety of steps, holds and speeds.

The 2007 Russian Junior bronze medalist also performed a unique level 3 combination spin in which a silhouette was formed by them facing each other on bended knee. The team concluded their dance with a fast level 4 rotational lift, and earned a new personal best of 55.46 (30.53/88.98) points for a third place finish in the OD and overall (88.98 points).

“We’re very pleased with how we performed,” said Gorshkova, “it went quite easy for us. “It was a good day for us.” Butikov agreed, chuckling and adding, “and the battle will continue.”

Teammates Monko (17) and Tkachenko (21) showed excellent speed and good matching leg extensions in their circular footwork, but then Monko lost her balance during the midline step sequence, almost falling on the first twizzle. The team received positive GOEs for all other elements, and placed fourth with 53.70 (28.01/25.69) points. With a total score of 88.69 points, however, the 2007-08 JGP champions slipped to fourth overall after this segment of the competition.

USA’s Madison Hubbell (17) and Keiffer Hubbell (19) placed fifth in the OD with 51.30 (30.31/21.99) points, and are currently fifth overall with 81.82 points. The current U.S. Junior champions captured the lilt and character of their Schuhplattler – a traditional folk dance from Bavaria and Austria. Of all dance teams, they were one of two who earned a level 4 on all elements. However, there was a slight loss of unison on the twizzles which resulted in the negative GOEs, and the team also received a one-point deduction when Madison Hubbell fell while skating backwards.

The Americans were pleased with their performance despite the fall. “We are really excited for tomorrow,” said Madison. “Hopefully we can have a great performance.”

Ekaterina Riazanova and Jonathan Guerreiro of Russia delivered an exuberant Russian Gypsy dance in which all elements received a level 4 except for a level 3 straightline step sequence. The 2007-08 JGP finalists also received positive GOEs on all elements, placing sixth in the OD (50.96 points) and overall (79.65 points).

Ukrainians Alisa Agafonova and Dmitri Dun placed seventh in the OD (49.52 points) and are currently seventh overall (77.80 points). The 2007-08 JGP finalists performed a lively and fun Ukrainian Folk dance in which all elements were awarded a level 4 except for their level 3 circular step sequence.

Isabella Pajardi and Stefano Caruso of Italy stood in 14th after the CD due to a fall by Pajardi. However, the 2007 JGP Sofia Cup champions produced a solid dance which earned them 47.59 points for an eighth place finish. They are now currently 11th overall with 72.55 points.

Lucie Mysliveckova and Matej Novak of the Czech Republic, who stood in sixth after the CD, received a two-point deduction for a fall by both during a lift. The team also received an additional deduction for a costume violation, and placed 14th in the OD. The are currently ninth overall with 74.29 points.

For the 2008-09 season, the ISU has selected the rhythms of the “Roaring Twenties”. Dance teams may choose to skate one of the mentioned rhythms (e.g. Charleston, Blues etc.), or combine up to three different rhythms. Any variations of tempo or rhythm within a music chosen will be permitted and vocals are permitted.

“We’re excited to do the Roaring 20’s,” commented Bates. “I think like this year, there will be opportunities to do different things — blues, Charleston, foxtrot, jazz. There’s going to be some leeway and not everyone will be doing the same thing and also it will be good for the audience to watch because a lot of those styles are very entertaining.”

Samuelson agreed, adding: “Of course we’re always looking for music choices; that started a couple of months ago. Hopefully we’ll narrow it down and be able to choose something fairly soon.”

“I definitely think it will be interesting to watch and will allow us to go through the different genres and see what different moves we’ll be able to come up with,” said Crone.

“We haven’t look too much into next season’s music,” admitted Poirier. “We have a few choices. We’re really taking it one season at a time. I think we’re both excited to do the Roaring 20’s because it gives us the opportunity to explore different kinds of movement and it’s a very good contrast from this year.”