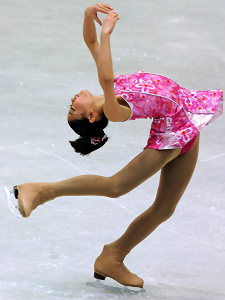 USA's Mirai Nagasu, 14, performs a layback spin in her routine to I Got Rhythm by George Gershwin.

Nagasu sparkled in her playful routine to I Got Rhythm by George Gershwin, which featured a superb layback spin. The current World Junior silver medalist landed a triple loop and double Axel, but was penalized on her triple Lutz-triple toeloop for using the wrong take-off edge on the Lutz.

“I was really nervous coming into this competition because it’s such a big competition,” the 14-year-old later confessed. When I got on the ice, I put all my fears behind me and I attacked out there, so I’m really happy with my performance.”

Nagasu received a lot of hype after winning the U.S. Nationals in her senior debut there. When she was asked how it felt to compete as Junior at this event, she replied: ” I’ve been training all year as a Junior, so going back to my Junior program was pretty easy. Just like last year at Junior Nationals, the win was unexpected, but a pleasant unexpected surprise so I really enjoyed it. Coming here, I got new skates and I’ve had a knee injury, but I put all that aside and will just focus on tomorrow’s long program.”

“I’ve had a lot of trouble with the flying sit spin at the beginning of the year,” Nagasu continued, “and I was getting level 1s on it. It was kind of fun to work on it for each competition, and finally at our Nationals and here I got my level 4. So I’m really pleased with that. Actually, since the flying sit spin is a point-getter, I might keep it for next year since I’ve gotten it now.”

Teammate Zhang exuded confidence along with a great Spanish attitude in her routine to Spanish Gypsy by Ray De Tone. The defending champion landed a triple flip-triple toeloop combination, a triple loop and a double Axel.

Flatt produced a playful, yet mature routine to Gershwin’s It Ain’t Necessarily So, which featured a triple Lutz-triple toeloop combination, a triple loop, and a double Axel. The U.S. silver medalist earned positive Grades of Execution (GOE) on nearly all elements, and is in a close third with a personal best of 60.16 (35.94/24.22) points.

“I’m very pleased with how I skated today,” said the 15-year-old. “I had a couple of bobbles going into my spiral and into my footwork which is almost a little embarrassing. I still had a lot of fun and I’m happy with how I skated.”

Yuki Nishino of Japan showed good speed and flowing edges in her routine to Leyenda by Vanessa Mae. The 1007-08 JPG Final bronze medalist landed a triple Lutz-double toeloop, a triple loop, and a double Axel. She is currently fourth with 54.15 (32.23/21.92) points.

Elena Glebova of Estonia scored 53.05 (30.76/22.29) points for her confident routine to Concerto de Aranjuez by J. Rodrigo. The 2006 Olympian landed a triple toeloop-triple toeloop combination, a triple loop, and a double Axel.

Glebova, who is making her fifth appearance at this event, is still recovering from a knee injury.

Finland’s Jenni Vähämaa is currently sixth with a new personal best of 50.30 (27.02/23.28) points. The 2007-08 JPG finalist produced a serene routine to O Mio Babbino Caro from “Gianni Schicchi” by G. Puccini, but two-footed the landing of a triple flip and turned out the landing of her double Axel.