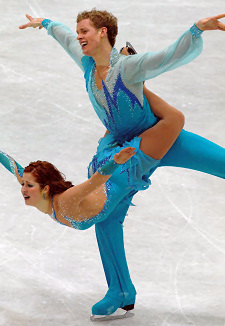 Last year, USA's Emily Samuelson and Evan Bates stood in second going into the Free Dance, but withdrew due to injury.

Last year at this event, Samuelson and Bates stood in second going into the FD, but the team had to withdraw due to injury. During the FD, Samuelson fell and Bates accidentally stepped on her hand, severing the tendon in her middle finger. The injury required hand surgery.

“It’s the opposite extreme from what happened last year,” said Samuelson. “We’re grateful for everything. For our coaches for getting us this far and the judges and fans for their support. It just has been wonderful.”

The 2007-08 JGP Final silver medalists displayed excellent speed and unison in their routine to Luna by Alessandra Safina, which was highlighted by precise and matching steps. The team earned a level 4 on all elements except for their dance spin, and were awarded positive GOEs on all seven elements by all 12 judges.

“We felt very, very strong during our performance,” said Bates. “We trained very well at home, so when we come to competition we can be relaxed and trust each other. We went out there and skated the program like we do in practice every day. That’s all what we needed to do. It’s very exciting to come through. All the elements were executed very well tonight; it wasn’t just technical elements one after another. We put together a performance that we’re very proud of.”

Crone (17) and Poirier (16) also produced an outstanding dance in which all elements were awarded positive GOEs as well as level 4s. Their routine to A Los Amigos by A. Pontier and F. Silva showed every aspect of the tango, and the team skated incredibly close together on deep edges and curves, while displaying the characteristic passion for the dance.

Their program was highlighted by excellent diagonal and circular footwork, as well as difficult lifts, and the Canadians earned a personal best of 86.86 (45.45/41.41) points for a second place finish in the FD and overall (178.09 points).

“We were very pleased with our free dance performance tonight,” said Poirier. “At the beginning of the season, we were told we needed to work on more speed. I think the free dance had a lot more speed tonight. Altogether I was very happy with the performance because I think it went to the audience as well.”

“It still hasn’t kind of sunk in yet,” Crone told the press. “We worked really hard to get this. Our original goal was the top five, so this is just the icing on the cake to come second.”

“After the Junior Grand Prix Final, we went home and trained really hard and focused on what we needed to work on,” added Poirier. “I think all our hard work has paid off here.”

Gorshkova (19) and Butikov (20) exhibited a real connection to each other in their routine to Total Eclipse of the Heart by Bonnie Tyler. While not as precise as the top two teams, the 2007 Russian Junior bronze medalists showed great intensity, and their steps and moves matched very well.

The 2007-08 JGP Final bronze medalists also earned a level 4 and positive GOEs on all elements. Their twizzles matched perfectly and their circular footwork showed close holds with matching lines and deep edges. They placed third in the FD with a new personal best of 83.87 (43.38/40.49) and were third overall (172.85 points).

“Tonight we skated really well and did all we wanted to do,” said Butikov. “Now we’ll have to train, train, train. We have to work on our presentation.”

Gorshkova agreed, adding:”We skated well, but we changed our Free Dance in the season and we could have skated it better if we had more time to work on it. Obviously we had hoped to finished higher. As an athlete you always want to win, but we are happy with how we performed.”

The Russians, who were fourth last year, had a difficult summer. The team lost their coach Tatiana Kuzmina to a car accident on July 3rd. She was only 44. Butikov also suffered a broken foot.

Teammates Maria Monko (17) and Ilia Tkachenko (21) produced an intense and dramatic dance to the dark and haunting music of Waltz of the Spirits by Karl Jenkins. The only error came when Monko fell during the second set of twizzles which were downgraded to level 1. All other elements were awarded a level 4 with the exception of a very good level 3 serpentine step sequence.

USA’s Madison Hubbell (17) and Keiffer Hubbell (19) skated a strong routine to Hope by Apocalyptica, with excellent matching twizzles and a superb diagonal footwork sequence. However, Madison Hubbell took a fall during a transitional move which resulted in a one-point deduction. The team earned a level four on all elements except for a level 2 straightline lift, and placed fifth with a new personal best of 75.65 (41.08/35.57) points. With a total score of 157.47 points, the current U.S. Junior champions maintained fifth overall.

Ekaterina Riazanova and Jonathan Guerreiro of Russia delivered an enjoyable dance to a Latin medley which was highlighted by a very good level 3 combination dance spin and serpentine footwork, as well as level 4 twizzles. The 16-year-olds placed sixth in the FD with a personal best of 73.64 (39.27/34.37) points and were sixth overall (153.29 points).

Isabella Pajardi (19) and Stefano Caruso (21) of Italy, who stood in 11th after the OD, placed eighth in the FD (71.58 points) and overall (144.13 points). The 2007-08 JGP finalists displayed deep and flowing edges in their dramatic routine, which featured very good level 4 twizzles as well as difficult lifts.

Canada’s Kharis Ralph (15) and Asher Hill (16) finished eighth in the FD (69.43 points) and overall (144.29 points). The Canadian Junior champions displayed a good connection to each other in their routine to Rainforest by Karl Jenkins, as well as very good matching positions.