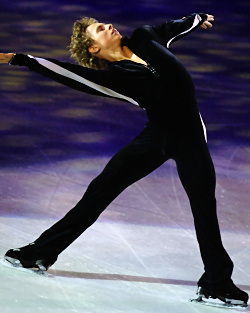 When he first started skating with Nikolai Morozov and his group at the Ice House in Hackensack, New Jersey last year, Adam Rippon was a bit intimidated by the world-class skaters with whom he was training. After all, both Japan’s Miki Ando and Daisuke Takahashi were both junior world champions and Ando was soon to be the world champion as well.

Now Rippon has joined their ranks as a junior world champion himself. And he did it on his first try. It took Ando three attempts before she reached the top of the podium. “When I first came, I felt completely inferior,” Rippon stated. “Now I feel like I’m one of them.

“I’m finally realizing that I’m the Junior World champion,” he said after his victory in Sofia, Bulgaria. “It’s what I wanted from the beginning of the season. It was a loud goal but if I worked hard, I knew I could do it. Nikolai believed in me so I believed in myself.”

His win in Bulgaria completed a gold medal sweep for Rippon in the major junior men’s events this season. In addition to winning the World Junior Figure Skating Championships, he also won the ISU Junior Grand Prix Final and his first U.S. national title. He also won the ISU Junior Grand Prix in Romania, but suffered the only blemish on his record when he came second at the ISU JGP in Sofia. Rippon had never won an international event before the 2007-08 season and only reached the podium once at U. S. Nationals, placing second in novice men in 2005.

The 18-year-old has five younger brothers and sisters, but none of his siblings aspire to be a figure skater. “They like to watch me but they have no desire to skate,” he stated. “Everyone else has their own goals.”

Rippon himself took some time before he began to love the sport. “My mother was a dance teacher and gymnastics choreographer,” he recalled. “One of the gymnasts that she was choreographing a floor program for had a sister who was a figure skater. So she asked my mother to choreograph a program for her sister. My mom didn’t know too much about skating so she went skating and took me along with her.”

“I was about seven,” he related. “It was an outdoor rink and all I remember was falling hard and eating snow off of my gloves. I hated it with a passion and didn’t want to come back. The next year, she took me again and I still hated it again. She tried again when I was nine and I thought it was kind of fun but didn’t continue. Then when I was ten, a new indoor rink opened near my house and I went again. That’s when I decided that skating was a lot of fun and I got group lessons for a birthday present.”

“When I started lessons, I wanted to learn fast,” he continued. “I always wanted to learn the next thing.” Rippon had landed his first triple Salchow within three years and is now working on the triple Axel and quad toe loop, both of which he hopes to perfect during the summer.

He began working with Morozov in February 2007. “After I bombed at Nationals in 2006, I realized that I’d have to stay focused if I wanted to stay in skating,” Rippon explained. “I wanted to go to Junior Worlds last year but I wasn’t good enough. I had two disappointing seasons so I told my mom I didn’t want to be another skater in the middle of the pack at Nationals and needed to make a change.”

“I had been skating in Philadelphia, but I had to go to five different rinks to get ice,” he recalled. “Sometimes I had to skate on public sessions or with the kids in helmets. Sometimes the zamboni was broken or something else was wrong. It wasn’t a real training environment. So after the 2007 Nationals, I told my coach I needed a change and decided to go to Hackensack since it was about the same distance from my home as Philadelphia.”

“I didn’t have a coach, but I was able to work with Nikolai,” Rippon continued. “Before Worlds, Nikolai asked me to skate with Miki and Daisuke. I commuted two and a half hours a day from my home and back to skate with them for a month and a half before Nikolai said he would be my primary coach.”

“I was still in awe at that time,” Rippon stated, “but it was the next step I needed to take. It was the right place at the right time. The training atmosphere is great. Miki and Daisuke were great role models. They’re great examples of how to be champions. They helped open my eyes to see that I could skate well.”

Rippon trains on ice for five or six hours a day, six days a week. “In the summer, I also did a lot of off ice training, about three hours a day,” he added, “but during the season I just do on ice training.”

Morozov choreographed Rippon’s 2007-08 programs, both of which were new for the season. For the short, Rippon is using Bach’s Toccata and Fugue in D Minor and for the long he is skating to Beethoven’s Moonlight Sonata. For his exhibition program, Rippon is using I Pagliacci by Ruggero Leoncavallo.

“People say I have a Russian style of skating, but I’m not copying anybody,” he noted. “My style is kind of Russian because I’ve only had Russian coaches, but I think it’s my own. It’s how I feel the music. I really like the classical style.”

“I think I’ll change both programs again next season,” Rippon said. “I loved my programs this season but keeping them would hold me back since I’ve grown as a skater. We had the I Pagliacci for a free program this season, but it was too big for me. So we decided to make an exhibition program from it to get it ready to use as a long program for next year. The ‘Toccata and Fugue’ had the same beats as some jazz music we liked so we decided to use that.”

Off ice, he listens to both popular and classical music, depending on his mood. “I also like to read a lot,” he said. “Usually I borrow books from other people that look interesting. I’m also learning a little Italian, Japanese and Russian. I’d love to learn more Japanese but it’s a complicated language.” He also plays tennis and soccer, hangs out with friends, and likes to travel.

Rippon, who is home schooled, will graduate from high school this spring. “Next year, I plan to take two university courses,” he said. “I want to study psychology or something else that will benefit skating. I think it’s important to have something to study so you can kind of wash your mind out from skating. If I didn’t have school or something else to do, I’d drive myself crazy from skating and putting too much pressure on myself.”