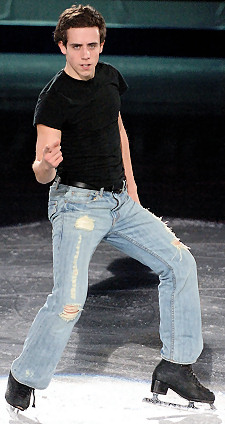 Stephen Carriere made his first international senior ISU championships a memorable one when he placed fourth at the 2008 Four Continents Figure Skating Championships in Goyang, South Korea. That followed up his first senior podium finish at U.S. Nationals, where he took the bronze medal a few weeks earlier.

Carriere had a successful junior season in 2006-07, winning both the ISU Junior Grand Prix Final and the World Junior Figure Skating Championships. He started the 2007-08 season with his first two senior ISU Grand Prix events, finishing fourth at Skate America and then winning a bronze medal at the NHK Trophy in Japan.

“I’ve been going and going and going all year,” said the student from Wakefield, Massachusetts. “I’ve been pushing harder to be better and faster. I didn’t want to get any minuses on my protocol, so I worked on my footwork and focused on getting better edges and getting my upper body in sync. At the senior Grand Prixs, everybody has a triple Axel and is ranked in the world standings, so it’s whoever has a good day that can win.”

Carriere gained more confidence after competing in the Grand Prix events. “I thought ‘I’ve competed against some great skaters and I can be on the podium at Nationals.'”

“It was in the back of my mind to get to Worlds,” stated Carriere, “but I didn’t really expect to get there at the beginning of the season. My goal for the year was to get top fives at both Grand Prixs and improve on my ninth place finish last year at Nationals, so I’m happy I did that. At the beginning of the season, I was just hoping to make the world team. I didn’t even think about Four Continents.”

In his debut at the Four Continents event, Carriere placed fourth in the short and fifth in the long, earning two new personal best scores. However, Worlds turned out to be an an eye-opening experience for the 18-year-old, who finished tenth.

“I was able to take in the atmosphere for the first time, and I noticed Worlds is a much different feeling than even Four Continents,” noted Carriere. “Placing in the top ten was a really nice achievement, and I am so happy Johnny (Weir) and I secured three spots for L.A.”

Ya, actually I fell on the first practice on the main arena, which was on Sunday (my first day of practice). I was basically just coming around doing a warm-up exercise and caught an edge and slammed right into the boards. It was so crazy and embarrassing too.
Stephen

However, Carriere admitted it wasn’t easy. On the first day of practice he caught an edge and fell, slamming into the boards, and bruised the lower right side of his back.

“I was in throbbing and shooting pain every time I would bend,” recalled Carriere, “however, I am really proud of myself for getting out there and sucking it up to compete. I was not going to let my first Worlds just slip up from under me, so out there I thought I must act like an athlete first, skater second. It was my job as an athlete to go out and do what I have been training, which proves that no matter what condition I am in, I will do what I am set to do.”

Carriere was also working on the quadruple toe loop, but the side of his shin near the ankle started to get inflamed. ” I had landed a lot of them, but I kept having to stop and rest the leg. I landed the first clean one right before I turned 17. I’ll work on it more this summer. I want to start working on the quadruple Salchow and maybe other quads. I’ll see how my body feels.”

Peter Johansson and Mark Mitchell coach Carriere, who trains at the Skating Club of Boston in Cambridge, Massachusetts. “I’ve been with Peter and Mark since I was ten and full-time since I was eleven,” Carriere stated. He works on ice for three hours a day, five days a week, plus another hour of off ice training each day. That includes ballet once a week.

“I’ve had ballet class once a week for a couple of years,” said Carriere. “Finally I started studying privately with an instructor. It helps a little bit with my strength and flexibility and helps me interpret the music more.”

Mitchell and Jamie Isley choreographed his 2007-08 programs, which included Stairway to Heaven by Led Zeppelin for the short, Hollywood Nocturne by the Brian Setzer Orchestra for the long, and Sexy Back by Justin Timberlake for the exhibition.

“I always have two new programs,” Carriere said. “My coaches and I want something fresh. Otherwise I get almost bored. We decide on music in the summer, then Jamie comes from California for a week and sets the foundation and Mark finishes it.”

“The short program music was actually something Mark had picked for a girl at our rink,” Carriere continued. “When he put it on, I said ‘Led Zeppelin. I love this stuff.’ She didn’t, but she told Mark that it would be good for me. For the long, we were running out of time and Mark thought the music would be pretty good for me. I always trust Mark because he knows my style. I’ve done a lot of soundtracks and a lot of Elvis, but not much classical music. I try to have my own style, not mimicking anyone else.”

Carriere has been skating since he was five after he saw Nancy Kerrigan skating at the Olympics and wanted to take up the sport. There are several other skaters in his family. His aunt was a skater with the Haydenettes synchro team and his cousin, Caroline Hallisey, competed in speed skating for the United States at the 1998 and 2002 Olympic Games. Carriere said he had no interest in speed skating. “It’s always been inside me to love figure skating,” he said.

Carriere landed his first triple Salchow at 13 and his first triple Axel at 16. Before he won the junior men’s title in the United States in 2006, he had always finished just short of the podium. He was fifth in juvenile men in 2002, sixth in intermediates in 2003, fourth in novice in 2004, and seventh in juniors in 2005.

Carriere has graduated from high school and is attending Boston College part time. “I’m taking two courses a semester. I’m a corporate business major and I hope to go to medical school afterwards. My dad said it would be good to have the business background if I’m going to open my own medical practice in sports medicine. I may coach some skating while I’m in medical school, but I don’t think I’ll be a full time coach unless life takes me there.”

For fun, Carriere likes to work out and play sports. “I like to keep the endorphins going. In the summer, I play a lot of tennis with my dad. He was on the tennis team in college.”

Carriere enjoys a myriad of music. “I have my iPod on all the time. I listen to a lot of classical, alternative, and Indie music, but no hip hop or rap. I’m not a musician at all myself.”

The skater also likes to study languages and read, but not during the school term. “I don’t like to read for school and for fun at the same time,” admitted Carriere. “I’m reading theology and Plato and Aristotle for school and that’s enough.”